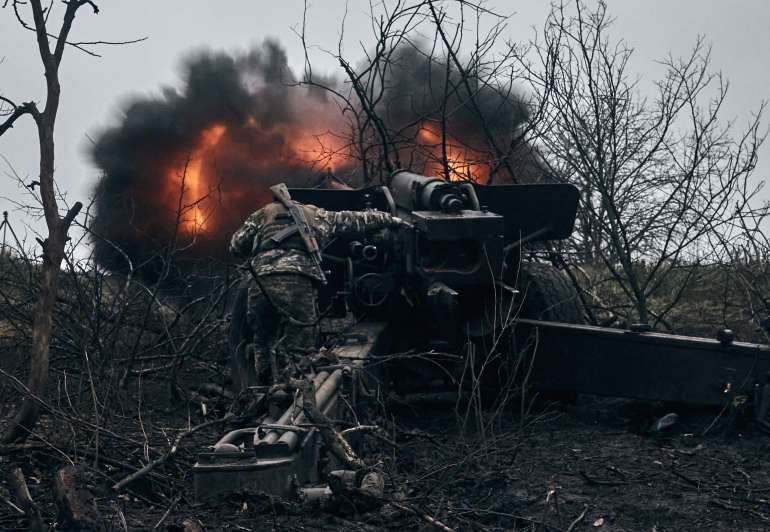 Even the Biden administration, which has senior leaders disagreeing in public about when diplomacy should start, made one of the strongest cases for continued and uninterrupted aid to Kyiv.

“The outcome of the war in Ukraine will help determine the course of global security in this young century, and those of us in North America don’t have the option of sitting this one out,” Defense Secretary Lloyd Austin said during a well-received address on Saturday before jetting to Asia. “Stability and prosperity on both sides of the Atlantic are at stake.”

The forum has long served to galvanize U.S. and Western leaders around issues of global importance with an eye toward promoting democracy worldwide. Ukraine’s fight against Russian President Vladimir Putin’s aggression was the central focus of this year’s session.

“We cannot let Russia and Putin get away with this kind of aggression,” Dutch defense minister Kajsa Ollongren said on the sidelines of the meeting.

“The Ukrainians are fighting this war, but it’s also our war,” she said. “If Russia would win, it would have a direct impact on our security.”

Attendees did address the growing debate about when and how to start talks during three days of public and private sessions, but the main message from the conference was to double down on supporting Ukraine. And Ukrainian officials who traveled thousands of miles in the midst of war to Halifax said they felt buoyed by the support. “I feel a strong bond, especially being here,” Ukrainian Deputy Prime Minister Olga Stefanishyna told reporters during a pull-aside roundtable.

Fresh off midterm elections that saw control of the House flip from Democrats to Republicans, a group of nine lawmakers stressed that bipartisan support for helping Ukraine defeat Russia isn’t diminishing on Capitol Hill.

“This is probably one of the most bipartisan issues I’ve seen since I’ve been in Congress,” said Sen. Jim Risch of Idaho, the top Republican on the Senate Foreign Relations Committee.

“There are only a handful of people that are balking at engaging in this struggle in Ukraine,” Risch added. “So, focus on the majority. We are bound to do this in a bipartisan basis. We’re arm-in-arm on this.” Despite such promises, Ukraine has expressed worries that a Republican-led House won’t have the appetite for long-term economic aid.

The global reverberations of the war in Ukraine were top of mind for leaders from across Europe. “If we lose in Ukraine, we lose Belarus, we lose credibility,” around the world, Poland’s chief of defense Gen. Rajmund Andrzejczak told POLITICO at the conference. China is watching the conflict closely, Andrzejczak added, and since Beijing is a more serious longer-term threat, success in Ukraine will have effects in the Indo-Pacific as well.

“It’s a matter of synchronizing our efforts,” he said. “If we do not fulfill the mission first in Ukraine, we will not be ready for mission number two, which is China.”

The general’s comments underscored how the tone at Halifax was a 180-turn from last year. Then, the botched U.S. military withdrawal from Afghanistan, the Jan. 6 insurrection and Russia’s military buildup on Ukraine’s border led transatlantic allies to question the strength of American democracy and global commitments. China was also the conference’s Big Bad, with panels and nighttime powwows centered on curbing its rising power and countering its brand of authoritarianism.

But this year featured much less attention on Beijing and even less criticism of the United States. The consensus was that Washington and its Western allies were right to prioritize Ukraine’s fight — and should keep doing so — while also derailing China’s machinations in cyber and technology. The tone in many ways reflected the two major NATO meetings in Brussels and Madrid this year in which NATO’s previous attempts to shift focus to countering Chinese influence were drowned out almost completely by Ukraine.

Ukrainian leaders clearly saw the forum as an opportunity to bolster their case. Ukrainian President Volodymyr Zelenskyy, presidential office chief Andriy Yermak, national security adviser Oleksiy Danilov and others spoke to the elite audience virtually, rejecting calls for an imminent negotiated peace. Instead, they said Ukraine was now the frontline of global democracy, a sentiment shared by many in attendance at the forum.

“Today, we have historic unity of all democratic countries around Ukraine, and this is very important. We’re together, we will be together after we win this war,” Yermak said on Saturday.

The insistence on that unity may have been particularly fervent because of tensions that appeared in the days leading up to the conference over a missile that landed across the Ukrainian border in Poland, killing two civilians. Ukraine initially said a missile launched by Russia was to blame, though Warsaw and Washington said the evidence points to a Ukrainian air-defense missile. Now, both capitals have pledged to wait for the result of an investigation before commenting further.

Like other Western leaders, Andrzejczak blamed Russia for the incident as it came in the midst of a barrage of 100 Russian missiles launched Tuesday night targeting civilian infrastructure.

The question on Sunday, after two days of conference sessions, was where to go from here. An answer might be needed soon, as there were hints Kyiv had plans for a next phase in the war.

Both Yermak and Stefanishyna, the deputy prime minister, alluded to a coming military campaign to retake control of Crimea, the peninsula Russia illegally annexed in 2014. Neither official would talk about timelines, though Ukraine’s deputy defense minister told Sky News that Ukrainian troops would be in Crimea by the end of December.

Congress is also set to consider a fresh $38 billion in Ukraine aid over the coming weeks as part of a government funding package. The latest request from the Biden administration comes on top of roughly $66 billion Congress has allocated for military, economic and humanitarian assistance since Russia launched its full-on invasion in February.

Lawmakers may boost assistance beyond what the administration is seeking.

“It’s specifically my hope that we will add to the humanitarian side of it,” Coons told reporters.

“The United States needs to make clear we are willing to not just provide the package the president has requested but add to it in ways that we think will add to Ukraine’s defense,” Coons said.

Rep. Sara Jacobs (D-Calif.), though, urged that funding for Ukraine should look deeper into the future. “I’m hoping that the focus on winning extends beyond the weapons, because I think there’s going to need to be a real effort to rebuild,” she said. The focus should be “on rebuilding a democratic Ukraine.”

Lawmakers huddled with Austin on Friday on the sidelines of the conference. The Pentagon chief discussed, among other issues, how aid could shift over time to meet emerging challenges in Ukraine as well as the health of the defense industrial base, which must ramp up to provide weapons and equipment while backfilling U.S. stocks of weapons already sent to the frontlines, according to Rep. Jason Crow (D-Colo.).

“I would much much rather be members of the defense contact group and Ukraine right now than Russia, because they’re in really bad shape,” Crow said. “It’s going to take a very, very long time for Vladimir Putin and Russia to reconstitute the army that they had just nine months ago. It’s that bad for them.

“So, yes, what we’re doing is very effective,” he said. “But the adversary always has a vote.”