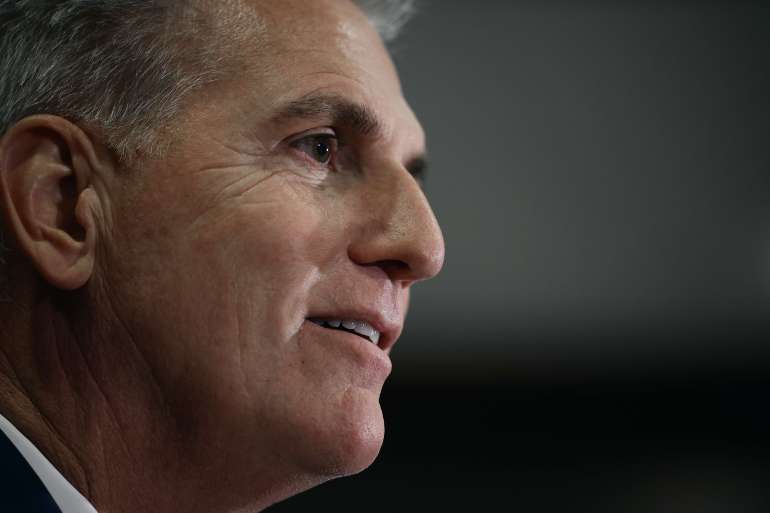 Whether centrists are willing to withhold their speakership votes from McCarthy on Jan. 3, as some conservatives have indicated, remains to be seen. But it’s not just the more moderate Joyce-led group eyeing ways to have extra influence next year. Even as Washington’s attention after the midterm turns to the Freedom Caucus, members of the Main Street Caucus and the bipartisan Problem Solvers Caucus are talking among themselves about it.

Reps. Brian Fitzpatrick (R-Pa.) and Josh Gottheimer (D-N.J.), the Problem Solvers’ co-chiefs, met for dinner last week and talked about possible rules changes to help ensure their roughly 50 members next year are more unified, and therefore more powerful, on the floor next year. Among them: guidelines to endorse only bills that are bipartisan when introduced.

“We just want to make the group more accountable … I mean, the whole point of our group is to stick together on the floor when we endorse bills,” Fitzpatrick said, adding that their ability to coalesce could be “important” given the tight margin.

Other factions in the House are already looking to form alliances with the centrist group. Fitzpatrick said he’s been hearing from Freedom Caucus members who want to find common ground with the moderate wing next year, as well as from Democratic senators who are looking for GOP allies in the lower chamber as they weigh their legislative priorities.

Republicans in the Main Street Caucus met last week as they grow their own ranks ahead of next year. Rep. Don Bacon (R-Neb.), who co-leads the group, said they were nearing 90 members, adding that after years of the Freedom Caucus throwing its weight around: “It’s time we flex our muscles.”

The first real test of the power of the House GOP’s different wings — and McCarthy’s support from them — will be the chamber-wide vote for speaker on Jan. 3. Virtually every Republican group is already looking to exhibit its leverage in a threadbare majority that gives McCarthy a cushion expected to be no larger than five votes. And in some cases, the GOP factions’ priorities will clash.

McCarthy’s speakership bid looked on shaky ground last week after 31 GOP members voted for his hardline conservative challenger in a closed-door conference election and five more put down write-in names. Not all of those Republicans are expected to oppose him come January, but it served as a warning to the GOP leader.

To many rank-and-file members, it was also an opportunity.

Since that secret ballot race, a trickle of lawmakers have publicly announced their plans to vote against the California Republican. Reps. Matt Gaetz (R-Fla.), a long-time “no” vote, and Andy Biggs (R-Ariz.) have stated emphatically they won’t support McCarthy for speaker; first-term Reps. Matt Rosendale (R-Mont.) and Bob Good (R-Va.) have strongly signaled that they are likely to oppose him.

“The stages of grief include denial, so there will be some denial, and then there will be the stage of bargaining. And that’s where we’ll probably be next,” said Biggs, who challenged McCarthy for the nomination.

While several House races remain uncalled, McCarthy likely couldn’t afford to lose all four of those votes on the floor — which means he either has to twist arms, make concessions or both to line up the support he needs come January.

And there’s a big question mark when it comes to how far he’ll go to attain his dreams of the speakership. Some say McCarthy would stand his ground and refuse any hard-line bargains, but there’s rampant speculation that his desperation to win the floor vote could drive him to acquiesce to deals that would be difficult for future GOP leaders to pull back.

Still, other Republicans shrugged off the maneuvering as a necessary exercise, saying they’d continue helping him reach 218. Even if McCarthy does make an unpopular concession, rank-and-file Republicans could still vote it down on the floor, these allies argue.

“We’re not going to be voting for any crazy policies, so he can make all the commitments he wants,” said one House Republican, granted anonymity to speak candidly.

McCarthy’s already avoided one landmine, squashing talk from the Freedom Caucus about making it easier to depose a speaker. Instead, he got the conference to agree that a motion to vacate the chair — how conservatives pushed out then-Speaker John Boehner — would require the support of a majority of House Republicans.

But January’s high-stakes vote will be tougher, with McCarthy needing a majority of votes among all House members, not just his own conference. With just a few votes to spare, he’ll likely have to borrow tactics from previous leaders, including Speaker Nancy Pelosi: Convincing his defectors to vote “present” or not show up at all.

Even some Democrats are plotting how to get in on the action.

A group of centrist Democrats has been privately discussing ways to play in the speaker race if it can mean winning concessions of their own, including potential leeway on rule changes and committee structures, according to a half-dozen people familiar with the conversations.

One Democrat familiar with the conversations described the idea as more of a “back-up” plan in case McCarthy can’t reach the votes on his own, rather than an active push to interfere with the race. Still, some Democrats have discussed what they could get in exchange for cooperating with the GOP leader — or even floating their own moderate speaker candidate if McCarthy loses too much ground.

The pro-McCarthy Bacon told POLITICO that Democrats had reached out to him after NBC reported that he was open to working with them if Republicans couldn’t unite behind a candidate. (Bacon said the report mischaracterized his remarks and predicted McCarthy will get to 218 votes.)

Bacon declined to describe his response to the outreach, while acknowledging that “we’re talking,” but the “ball is in the other guy’s court.”

The idea of Democrats working with centrist Republicans to try to elect a speaker has sparked warnings from the GOP conference’s right flank, including those backing McCarthy.

“We have a very slim majority, and so this is why it’s so important for us to stay unified … because we cannot open the door to the Democrats peeling off several of our Republicans and working together to choose a speaker,” said Rep. Marjorie Taylor Greene (R-Ga.), who’s become a key Freedom Caucus ally for the GOP leader.

McCarthy has also privately and publicly dismissed that he would solicit Democratic votes for speaker.

“We’re the majority as Republicans and we’ll get there as Republicans,” McCarthy told reporters after the Tuesday leadership elections.