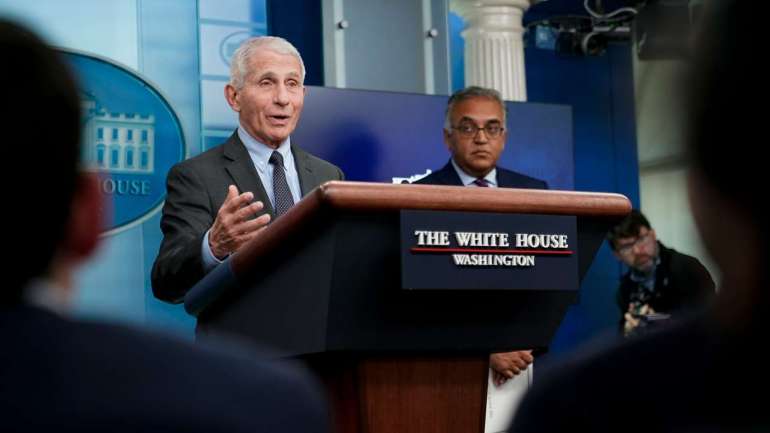 His message Tuesday — encouraging vaccination and vigilance against a virus still killing roughly 300 Americans a day — offered critics and supporters a taste of what turned Fauci, a career civil servant, into a household name.

To some, his straight talk about how Americans should navigate an unprecedented health emergency made him a folk hero, generating a line of merchandise from oven mitts to bobblehead dolls. To others, his push for mitigation measures such as vaccines, masks and social distancing that meant closing schools and businesses rendered him a villain, and he faced withering criticism, death threats and conspiracy theories about his role in Covid-19’s origins.

That rhetoric, which was coarsened by former President Donald Trump, turned vaccines into a partisan issue that Biden White House officials are still contending with as only a fraction of eligible Americans have received the updated Covid-19 bivalent booster.

His farewell was interrupted on multiple occasions when a reporter in the back of the briefing room shouted down her colleagues, demanding to know what Fauci had personally done to investigate the virus’ origins, ultimately prompting White House press secretary Karine Jean-Pierre to intervene.

Fauci didn’t react, sticking to the message he’s been hammering home for months: urging people to get the updated Covid booster shot ahead of the colder months during which public health officials expect to see a surge in new infections.

“Immunity and protection wanes over time,” he said, working to counter skepticism from people who don’t see the need for a third, fourth or fifth shot. “You need to update the protection we know is good protection.”

“You need to update the protection we know is good protection.”

As the holidays approach, the nation is staring into the face of what many have warned could be a “tripledemic:” hospitals are grappling with an unprecedented wave of pediatric respiratory virus, flu cases are rising, and an uptick in Covid-19 cases portends a possible surge as new variants circulate.

The sluggish pace of vaccinations against both Covid-19 and flu in recent weeks are frustrating Biden health officials, who have lamented the fact that hundreds of people are still dying each day in large part because of skepticism around the updated shots. There’s also growing fear that the combination of Covid-19, flu and respiratory syncytial virus, which has spiked in young children this fall, will take an outsize toll on the nation’s overworked health care workforce — laying the groundwork for overwhelmed hospitals and postponed care early next year.

The Biden administration announced on Tuesday it is launching a “six-week sprint” to encourage more Americans to get the updated shot before the end of the year, with a focus on reaching seniors and communities hit hardest by the pandemic.

The administration said it is sending $350 million in new funding to community health centers to set up pop-up and mobile vaccine sites and $125 million to get the vaccine to older Americans and people with disabilities.

CMS is also reminding nursing homes they are required to educate and offer vaccines to residents, and HHS will launch an ad campaign urging seniors to talk with providers about seeking treatment for Covid-19.

Biden officials in recent weeks have scoured the health department for whatever little funding is available to make its post-Thanksgiving vaccination push. Earlier this month, the administration requested more funding from Congress to stay ahead of a possible winter surge, but Republicans have said its inclusion in an end-of-year spending package is unlikely.

A study released Tuesday by the Centers for Disease Control and Prevention shows that the updated mRNA booster provided “significant additional protection” against symptomatic Covid-19 in individuals who had received the original mRNA vaccines.

Though the data is limited, it builds on more robust studies from Pfizer and Moderna that indicate Americans who get the updated vaccine are better protected against Covid heading into a winter.

“We can prevent essentially every Covid death in America,” said White House Covid-19 Response Coordinator Ashish Jha, who also spoke at the briefing. “That is a remarkable fact, 2½ years after we found this virus first in our country. But it’s going to take all of us to make that happen.”

‘I have no trouble testifying’

Though this was likely Fauci’s last appearance at a White House press briefing, there is still a chance he will participate in at least one more Covid briefing, officials said. Aides are also mulling doing a bigger “goodbye” event in December that would focus specifically on Fauci’s departure from government.

Fauci has stressed that he is not retiring but moving onto another phase of his career. He has remained tight-lipped about his future plans, officials said, in a bid to keep the focus on the administration’s outstanding work and minimize the risk of giving Republicans new reasons to put him back in the spotlight.

He may not be able to avoid it. House Republicans have said flexing their new oversight powers to probe the Biden administration’s Covid-19 response will be a priority in the new Congress, and have pledged to hold Fauci “accountable for obscuring the truth behind the origins of Covid-19.”

Fauci told POLITICO in an interview this summer that he was prepared for the attacks that could come in a Republican-controlled House, but insisted it was not part of his calculus for retirement.

“If there are oversight hearings, I absolutely will cooperate fully and testify before the Congress if asked.”

“They’re going to try and come after me, anyway,” he said. “I don’t think they can say anything about the science. … If that’s what you want to investigate, be my guest. My telling somebody that it’s important to follow fundamental good public health practices … what are you going to investigate about that?”

He reiterated that sentiment on Tuesday. “If there are oversight hearings, I absolutely will cooperate fully and testify before the Congress if asked,” he said. “I have testified a few hundred times over the last 40 years or so, so I have no trouble testifying. We can defend and explain and stand by everything that we said.”

Reflecting back on his time helping lead the U.S. pandemic response, Fauci said that in early 2020 he never imagined that he, or the nation, would be facing a “three-year saga of suffering and death” that would kill so many Americans, and cited the evolving variants as one of the thorniest elements to navigate.

At the same time, he said, Covid-19, while “really, really very important” is only a “fragment” of the decades he’s spent in public service.

“I’ll let other people judge the value, or not, of my accomplishments,” he said. “But what I would like people to remember about what I’ve done is that every day for all of those years, I’ve given it everything that I have and I’ve never left anything on the field. So if they want to remember me — whether they judge, rightly or wrongly, what I’ve done — I gave it all I got for many decades.”