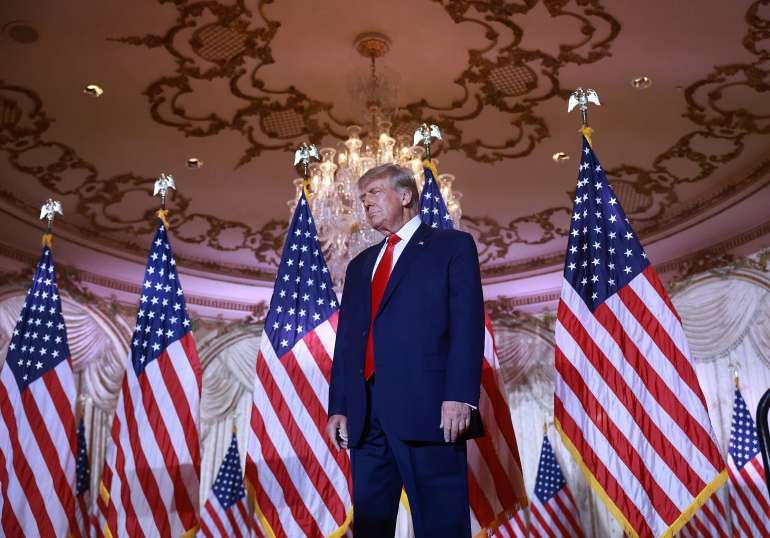 Trump refrained from mentioning Jan. 6 during his presidential bid announcement. But the inclusion of those who were in Washington on Jan. 6 at his Mar-a-Lago event underscores how closely linked he remains to the melee that unfolded that day. Rather than isolating and ostracizing Jan. 6 figures, Trump’s team has kept them in the fold, even promising pardons for those who were there.

And they’ve noticed. In interviews and social media posts, several of those who attended both the Jan. 6 events and Trump’s White House announcement continued to spread conspiracy theories. They believe the 2020 election may have been stolen. At least one insists that the storming of the Capitol was an inside job by Trump’s enemies designed to pin blame on him and his MAGA movement.

“Jan. 6 was a crock of shit, as pretty much anybody who was in attendance knows,” said Ian Smith, a New Jersey gym owner who made headlines when he defied Covid-19 rules and lost his race for Congress. He spoke to POLITICO days after appearing in Palm Beach with other Trump faithfuls.

Smith said he’d originally planned to speak at the so-called “Stop the Steal” Jan. 6 rally in D.C., but didn’t end up doing so. Smith said he still went to the gathering in D.C. that day “to speak on behalf of the president” and that he believes the insurrection was “an opportunity to make Trump look bad, and it was pulled off brilliantly. I’ll give it up to whoever masterminded it.”

Trump too has continued to falsely claim the 2020 election he lost to President Joe Biden was stolen. And he’s been openly sympathetic to those who were at the Capitol that day, including Ashli Babbitt, who was shot and killed by Capitol Police as she tried to break into the Speaker’s Lobby.

Asked for comment, Trump campaign spokesperson Steven Cheung said discussion of Jan. 6 attendees being at Mar-a-Lago was a distraction “from the abject failure of Joe Biden and his administration.”

“This is just another disgusting example of has-been media outlets targeting President Trump’s supporters and the MAGA movement simply because they attended last week’s announcement speech,” said Cheung. “After two years of skyrocketing inflation, a complete surrender at the border, and the recent American job-killing climate deal reached at COP27, Biden has done more damage to this country than any president in history.”

In the months since Jan. 6, prosecutors have brought charges against hundreds of rioters, several of whom have expressed regret for their actions. Others have tried to draw distinctions between being at the Capitol that day and storming it.

Elijah Schaffer, who attended Trump’s campaign launch, is one of those individuals drawing distinctions. He was inside the Capitol on Jan. 6, claiming to be documenting the insurrection as a reporter for Glenn Beck’s conservative media outlet The Blaze. He was with a far-right group that broke into Speaker Nancy Pelosi’s office, and wrote on Twitter that afternoon that “I am inside with the thousands of revolutionaries who have stormed the building [Capitol].”

In a newly released video shown to jurors at the trial of Riley Williams and posted online by NBC News last week, Schaffer is seen filming himself in Pelosi’s office mirror and appears to be saying, “Guys we are in, we are in Nancy Pelosi’s office right now. I have to do this in a mirror. We have, we are occupying the Capitol building.”

He did not respond to a POLITICO request for comment.

At Mar-a-Lago last week, Schaffer filed a report for conservative outlet The Next News Network. And in a video he posted of himself at Trump’s club, he accused news reporters of only being interested in capturing attendees with “patriot insignia on them because they want to make all the Trump people look like they’re crazy or they’re all connected to the January 6 event.” He argued that if Trump didn’t “run on election fraud” in his 2024 campaign, then “really we have no hope; we have no chance.”

Others at Mar-a-Lago last week — and on the Washington Mall on Jan. 6 — felt similarly that Trump was a victim of a rogue Justice Department and an inherently corrupt election system. They include Debbie Ferro-Murphy, who posed for pictures on Instagram from Trump’s announcement wearing an American flag scarf and lapel pin. Ferro-Murphy, who didn’t respond to interview requests, has argued in posts on social media that Jan. 6 was a “‘Fedsurrection,’ and not an insurrection.”

“Certain witnesses of the events of January 6, 2021 were not spectators, they were animators of these events,” she wrote, after posting pictures with the Capitol behind her on Jan. 6. “The American people deserve to get to the bottom of what really happened that day, who knew about it, and who was intentionally involved in it and why.”

Blake Marnell, whose brick-patterned suits have earned him a Twitter following, was at both the Mar-a-Lago announcement and the Jan. 6 events. He posted a video of himself just outside the Capitol on Jan. 6 in a red “Stop the Steal” cap. Marnell did not respond to a request for comment.

Earlier today roughly 20 minutes after the initial push by protesters towards the Capitol from the mall.

At the time I filmed this, while there was tear gas in the air, I had viewed no violent acts from either side and the protest was in my estimation entirely peaceful. pic.twitter.com/6oHOjxDgRy

Alex Bruesewitz, whom POLITICO previously described as an organizer of “Stop the Steal” was also at Trump’s Mar-a-Lago announcement. He said he did not march down to the Capitol on that January day and reportedly pleaded the Fifth when summoned by the Jan. 6th committee.

Adam Radogna, one of the so-called “Front Row Joes” — named for the frequency with which they attend Trump rallies — was a “Special Guest” of Trump’s at his club last week. He was also just outside the Capitol as rioters stormed the doors nearly two years ago. Since then, the 33-year-old Cleveland native, who said he works in real estate and owns a 7-Eleven, has built a large following on TikTok. He made headlines earlier this year when he released a video of himself being asked by a Spirit Airlines flight attendant to replace his “Let’s Go Brandon FJB,” mask. She told him it was offensive. He threatened legal action.

In an interview, Radogna said it was important to be at both events “to make sure that we were there to support him and the movement.” He added that “both events were obviously good events, and unfortunately a lot of things that were done on Jan. 6 were horrible, obviously [that] I don’t condone.”

Radogna, who was pictured on social media just outside the Capitol on Jan. 6, said he didn’t know whether the insurrectionists were Trump supporters. He said he would have been peaceful had he gone inside the Capitol, but he added he’s glad that he stayed out.

“It didn’t make sense, but at the time, I don’t think people were thinking and they just did it.”