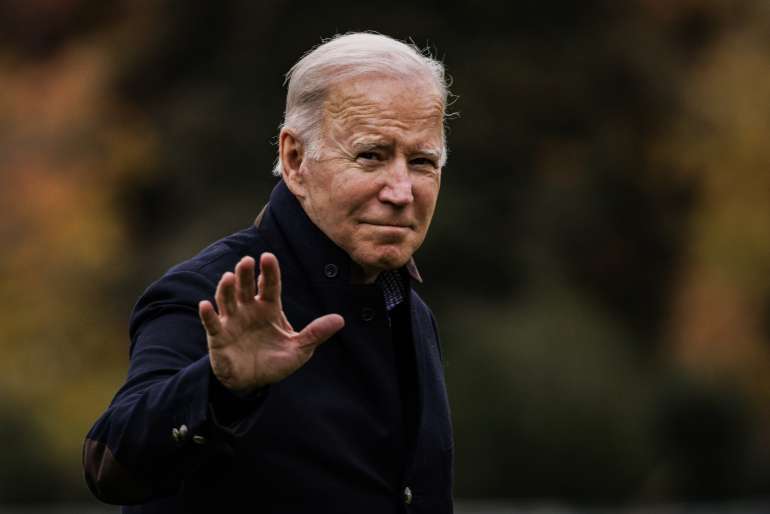 While there has been simmering tension within the Democratic Party about making a generational change, Biden’s fate appears to be intrinsically linked to Donald Trump, whom he defeated in 2020 and has deemed a threat to American democracy.

The former president has already declared his own 2024 campaign and Biden has privately made clear that he believes he might be the only Democrat who could vanquish Trump again. And while Pelosi had an established line of succession in the House, those close to Biden say the field to follow him is far more unsettled.

“Why would he get out now?” said presidential historian Douglas Brinkley. “He has no clear successor and what matters here is Trump. Joe Biden is seen as the Donald Trump slayer and many Democrats think he can do it again.”

In Washington, old age has become the norm.

Biden is the nation’s first octogenarian president and the oldest man ever to hold the office. And he has plenty of senior citizen peers populating the halls of power: Senate Majority Leader Chuck Schumer is 71, Senate Minority Leader Mitch McConnell is 80 and House Majority Leader Steny Hoyer is 83, just to name a few. Plus, Trump himself is 76.

After Pelosi’s announcement, Hoyer also decided he would resign his leadership role, clearing the way for a slate of lawmakers decades younger. Pelosi’s expected successor as Democratic leader will be 52-year-old Rep. Hakeem Jeffries of New York.

But Pelosi is stepping down as her party shifts into the minority. Biden is all but assured of remaining his party’s standard bearer in 2024 and would run for reelection on the backs of an enviable legislative record and midterm results that exceeded Democratic expectations.

“The midterms reiterated the fact that competent and effective government is a priority of a majority of voters, above anything else,” said Adrienne Elrod, a Democratic strategist who worked on Hillary Clinton’s 2016 campaign.

In 2020, Biden aides knew that the candidate’s age was an issue and briefly considered a pledge to serve only one term. That was dismissed. But Biden offered himself as a “bridge” to younger Democrats.

“I view myself as a transition candidate,” he said during one online fundraiser, suggesting he’d help field the next generation of leaders. “You got to get more people on the bench that are ready to go in — ‘Put me in coach, I’m ready to play.’ Well, there’s a lot of people that are ready to play, women and men.”

But walking away from the White House is more difficult once it becomes home. And Biden has spent nearly half his life seeking the office, having launched his first presidential campaign back in 1988.

There are many reasons why those around Biden believe he will run again: he presided over a series of legislative wins, including a bipartisan infrastructure bill and measures that enshrined Democratic climate change and health care priorities; he continues to spearhead a Western response to Russia’s invasion of Ukraine; and the Democrats this month held onto the Senate and held off a Republican wave in the House.

And then there is Trump. Two years ago, the party coalesced around Biden as a safe choice — a candidate who did not generate the most excitement but who it believed had the best chance to beat Trump, especially as a pandemic erupted. And even as polls now show that many in the party are eager for him to step aside, scores of key Democrats believe Biden should stay the course.

“He was not my first or second choice for president, but I am a convert,” Rep. Pramila Jayapal (D-Wash), told POLITICO recently. “I never thought I would say this, but I believe he should run for another term and finish this agenda we laid out.”

Jeffries, emblematic of the new vanguard in the House, also offered his backing: “I’m hopeful that President Biden will seek re-election and I look forward to supporting him.”

If Biden opted against a run, few in Washington believe the field would clear for Vice President Kamala Harris, and that could create a bruising primary battle. But some Democrats welcome a change, even if messy.

Ohio Senate candidate Tim Ryan, who dodged the president during campaign events this year, explicitly called for Biden in recent months to step aside in the name of “generational change.” Other Democrats are less confident about Biden’s chances against Republicans other than Trump.

But rarely do parties take on a sitting president, and when they do, the resulting primary challenges — like Ronald Reagan against Gerald Ford in 1976 and Ted Kennedy against Jimmy Carter four years later — almost always weaken the incumbent. It is also rare for presidents to forgo a reelection bid, with those who do stand down having usually been forced out by external crises, like Harry Truman by the Cold War/Korean War and Lyndon Johnson by the Vietnam War.

While Biden’s poll numbers are middling, he leads Trump in hypothetical matchups. The threat posed by Trump looms large for Biden’s family; first lady Jill Biden, said to be warming to the idea of a reelection bid, will play a pivotal role in the discussions. Though aides are taking steps to prepare for another run, a final decision on a campaign will likely not be made for months.

Chatter about Biden’s age has been pervasive throughout the Beltway ever since he signaled he was launching his third presidential campaign back in 2019. He had visibly aged since his time as vice president. His stride had also shortened and slowed, not helped by the broken foot he suffered while playing with one of his dogs during the transition. He has always been prone to verbal gaffes and now tires more easily, according to those close to him.

Though known for his own rhetorical missteps, Trump already tried to make Biden’s age an issue in their first matchup — dubbing his opponent “Sleepy Joe” and claiming he was no longer with it — to little impact. Republican attacks have only continued, with a persistent drumbeat that Biden is not fit to hold office.

Biden advisers believe the 2020 race dealt with the current president’s age — he would be 86 when leaving office if he served a full second term — and that voters have grown more comfortable with older people in positions of power, whether in politics or business. White House officials said he would undergo a routine physical in the coming months.

In his most recent exam, conducted last November, his doctor declared that Biden “remains fit for duty, and fully executes all of his responsibilities without any exemptions or accommodations.”