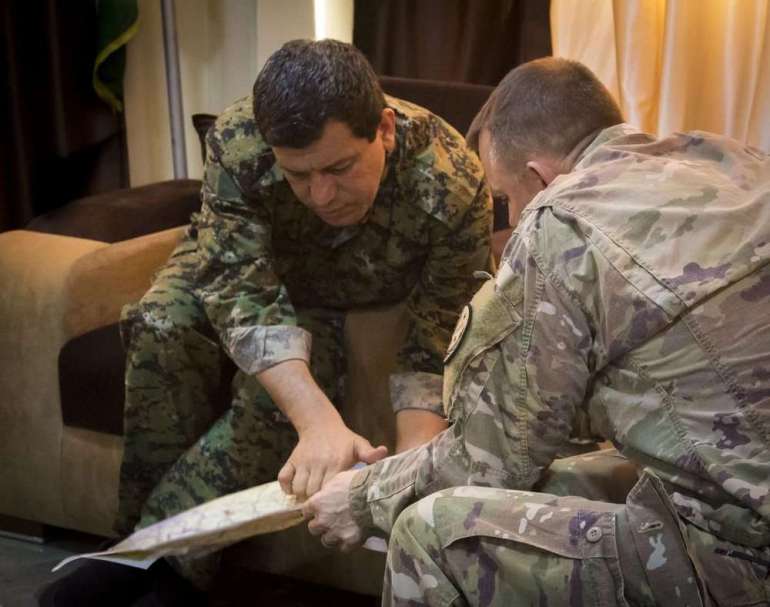 “We believe that it is a political and humanitarian responsibility of the administration and the president himself protecting the cities protecting the Kurds and the families of the 12,000 martyrs” that died fighting alongside U.S. soldiers against ISIS in Syria, the general said.

He called on the top levels of the U.S. government to increase pressure on Ankara. “So far, statements that have been put out are not enough to stop the Turkish plans to launch new operations against us.”

His comments come days after Turkey launched a series of deadly airstrikes across Iraq and northern Syria in retaliation for the Istanbul attack. Erdoğan promised on Tuesday to “root out” the “terrorists,” referring to the Kurdish militia he holds responsible for the Nov. 13 Istanbul attack that killed six people and wounded more than 80 others. The Kurdish groups have denied involvement.

The general said he believes the airstrikes are a precursor to a ground operation. So far, the strikes have killed 18 civilians and 11 Syrian Democratic Forces soldiers, he said. An incursion would devastate the region and further complicate the crisis in Syria, he said. ISIS will take advantage of the chaos to “regroup and re-surge,” he warned.

There is also a risk to the 900 U.S. troops who are still in Syria helping the SDF fight ISIS. Among the Turkish targets this week was a base jointly manned by the Syrian Democratic Forces and the coalition to defeat the Islamic State, which includes American troops, according to Sinam Mohamad, the Syrian Democratic Council Representative to the United States.

“We oppose any military action that destabilizes the situation in Syria,” Buccino wrote. “These actions threaten our shared goals, including the continued fight against ISIS to ensure the group can never resurge and threaten the region.”

Buccino declined to disclose the location of the base.

“The Department of Defense is deeply concerned by escalating actions in northern Syria, Iraq, and Turkiye,” said Pentagon press secretary Brig. Gen. Patrick Ryder, noting that recent strikes “directly threatened the safety of U.S. personnel who are working in Syria with local partners to defeat ISIS and maintain custody of more than ten thousand ISIS detainees.”

Ryder called for “immediate de-escalation” and condemned “the loss of civilian life that has occurred both in Turkiye and Syria.” But he stressed that the Pentagon recognizes “Turkiye’s legitimate security concerns.”

The airstrikes also jeopardize the refugee camps and detention centers holding tens of thousands of former ISIS fighters and their families, Mazloum, the Syrian general, said. One of the strikes hit very close to a detention center in Qamishli city housing 500 ISIS inmates, he said. Another hit near the Al Hol camp, which houses 60,000 ISIS family members, killing six SDF guards. In the aftermath of the attack, a group of ISIS family members escaped.

American and Kurdish officials are preparing for escalation. The U.S. military has been talking to Turkey “at all levels,” telling them to stop the operation, according to one senior Defense Department official, who requested anonymity to discuss a sensitive topic.

The general said his forces are already seeing Turkish mobilization on the border, including moving in reinforcements and tank battalions on Wednesday evening. But he said he believes Turkey needs U.S. and Russian “permission” to move forward with the operation.

The Turkish operation will likely target Kobani, which is close to the border with Turkey, and Manbij, about 60 kilometers to the southwest, and possibly other areas. There have been no American troops there since 2019, but Russian and Syrian soldiers remain in the area.

Kobani airfield served as the main logistics hub for the fight against ISIS until the Turkish incursion in October 2019, when Russian forces took control of the airbase.

Bassam Saker, one of three representatives to the U.S. from the Syrian Democratic Council, the political arm of the SDF, wrote a letter to Biden on Wednesday condemning the Turkish attacks and calling on the U.S. to halt the violence.

“Now, the United States has stepped aside and allowed these attacks to occur, violating years of partnership,” Saker wrote, noting the deaths of several SDF soldiers and special forces troops trained by the U.S. “The United States should never treat its alliances so carelessly. Where is the condemnation of the United Nations and the international community? Right now, we hear only silence.”

A spokesperson for the National Security Council could not immediately be reached for comment.

Since the summer, U.S. officials have warned Turkey not to launch an incursion northern Syria, saying that such a move would be catastrophic for the counter-ISIS fight. Top Defense Department officials visited Turkey this year to convey that message.

“We continue to urge for de-escalation on all sides and in our conversations,” Pentagon spokesperson Sabrina Singh said Tuesday.

Gen. Mark Milley, Joint Chiefs chair, spoke by phone with his Turkish counterpart, Chief of the General Staff of the Turkish Armed Forces Gen. Yaşar Güler, on Wednesday, according to a readout by Milley’s spokesperson.

Turkey launched a large-scale aerial assault around midnight on Saturday, using 70 fighter jets and drones across north and east Syria, according to the Rojava Information Center, a news agency run by pro-Syrian Kurd activists. The strikes also targeted sites around Duhok, Sulaymaniyah and Shengal in Iraq.

The possibility of a Turkish ground offensive is reminiscent of Operation Peace Spring in October 2019, when Ankara invaded northeastern Syria after Trump ordered American troops to withdraw from the region. More than 70 civilians in Syria and 20 in Turkey were killed, and more than 300,000 people were displaced.

A peace deal reached that month redrew the borders between Kurdish, Turkish and Russian-controlled areas of northern Syria.