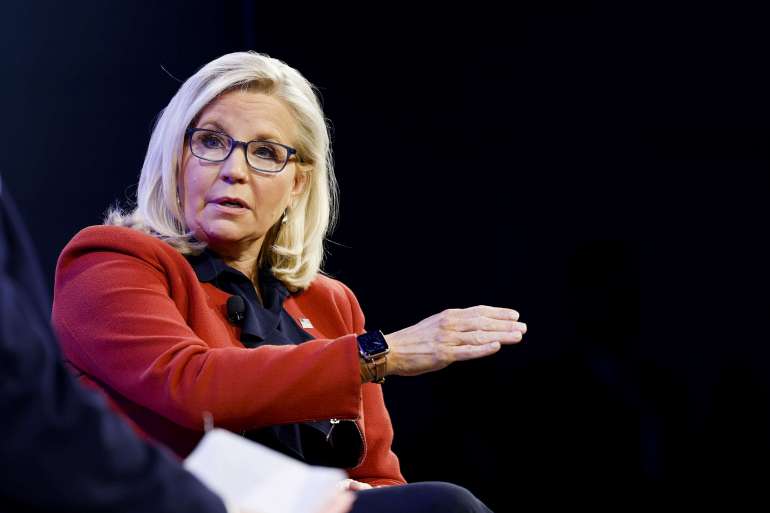 Kinzinger, like Cheney, is a frequent Trump critic who’s leaving Congress in January. Other Republicans on Sunday were also critical of the idea of the Constitution being set aside, but they declined to say whether they’d vote for Trump again after the statement.

“It is certainly not consistent with the oath that we all take,” said Rep. Mike Turner (R-Ohio). “I vehemently disagree with the statement that Trump has made.”

But Turner, speaking to host Margaret Brennan on CBS’ “Face the Nation,” declined to say Trump’s remarks were “disqualifying” when it came to his presidential candidacy.

“There is a political process that has to go forward,” Turner said.

On his own social media platform Saturday morning, Trump said falsely that there was widespread fraud in the 2020 election and argued that unprecedented measures were, therefore, called for to return him to office.

“A Massive Fraud of this type and magnitude allows for the termination of all rules, regulations, and articles, even those found in the Constitution,” Trump posted.

The Biden administration on Saturday condemned Trump’s statement, calling it “anathema to the soul of our nation.”

Pressed by host George Stephanopoulos on whether he could support someone who had suggested suspending the Constitution, Rep. Dave Joyce (R-Ohio) said on ABC’s “This Week” that he would “support whoever the Republican nominee is.”

“He says a lot of things,” Joyce said of Trump, adding that Trump does not have the power to suspend the Constitution. “You have to take it in context … I can’t be really chasing every one of these crazy statements that come out about — from any of these candidates.”

“I certainly don’t endorse that language,” Lawler said of Trump’s constitutional “termination” on CNN’s “State of the Union.” He urged Trump to look toward the future as Trump seeks the presidency again.

Democrats condemned Trump’s remarks and also suggested they reflected a larger problem within the GOP.

“It was a strange statement, but the Republicans are going to have to work out their issues with the former president,” Rep. Hakeem Jeffries (D-N.Y.), the recently elected House Democratic leader, said Sunday on “This Week.”

Rep. David Cicilline (D-R.I.) said Trump “has become like the crazy uncle down at Mar-a-Lago, saying things which make no sense in America democracy.”

Speaking on MSNBC’s “The Sunday Show,” Cicilline said Trump’s remarks are just the latest in a long line of troubling remarks undermining democracy.

“It’s just the most recent, but very explicit, attack by the former president,” he said.

Some Democrats specifically pointed to the relatively quiet reaction from across the aisle. Senate Majority Leader Chuck Schumer, for example, said “everyone” should condemn Trump’s “attack on democracy,” calling him “out of control.”

Rep. Adam Schiff (D-Calif.), who was a lead figure in Trump’s first impeachment trial, also called out “so-called ‘constitutional conservatives’” for not speaking out against Trump.

“I guess a ‘constitutional conservative’ is one who is conservative in their support for the constitution … when it’s inconvenient,” Schiff wrote on Twitter.

Rep. Kevin McCarthy (R-Calif.), who’s seeking to become the next speaker of the House, was not asked about Trump’s remarks in an appearance on “Sunday Morning Futures With Maria Bartiromo” but was sympathetic to the underlying assertions at the heart of Trump’s attack: his accusation that Big Tech worked to censor reports of misdeeds by Hunter Biden, son of presidential candidate Joe Biden, in the weeks before the 2020 presidential election.

“Think about the timeline of when this was right before the election, just a couple weeks. And remember how close this election was,” he said.

Trump also continued to take some criticism Sunday on his dinner late last month with antisemitic white nationalist Nick Fuentes and rapper Ye, better known as Kanye West. “This is atrocious,” Turner said, adding that he was astounded that in 2022, antisemitism still even had to be condemned.

“We need to make it clear we reject antisemitism left, right and center,” former Vice President Mike Pence said on “Fox News Sunday.” Pence said the question of whether the dinner was “disqualifying” is “for the American people” to decide.

GOP lawmakers have mostly declined to condemn Trump for the meeting, even if they’ve taken issue with the dinner itself. Ye has since made additional antisemitic comments, drawing additional fire from some Republicans.

Pence previously said Trump should apologize for meeting with Fuentes.

Israeli Prime Minister-designate Benjamin Netanyahu, an ally of Trump during his presidency, said Sunday on NBC’s “Meet the Press” that he doesn’t think Trump’s refusal to condemn antisemitic behavior will become “systemic.”

“I think he probably understands that it crosses a line,” Netanyahu said.