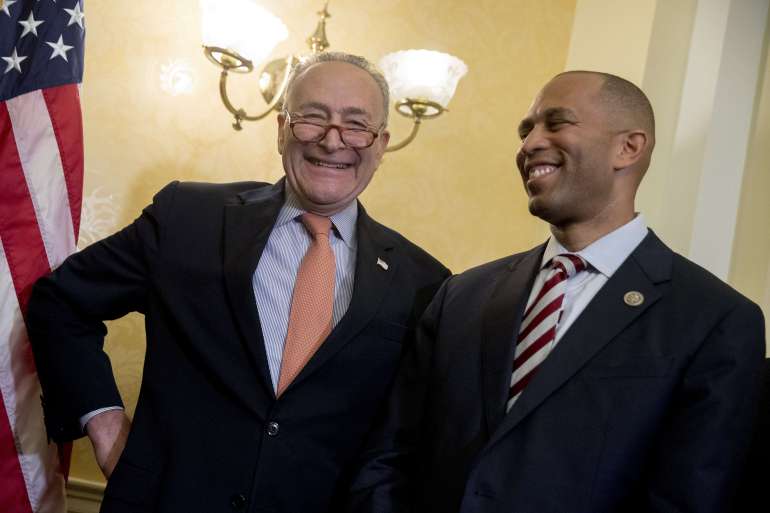 As they begin their cross-Capitol partnership next year, lawmakers close to both New York Democratic leaders say the interplay between their contrasting styles and skill sets will be critical to the party’s prospects for the remainder of President Joe Biden’s first term. With Republicans holding a paper-thin House majority and a Senate minority as big as 50 votes, Schumer and Jeffries will have to stay close and play off each other under a fiercely divided government with the 2024 presidential election looming.

Schumer, in an interview, acknowledged their “similar traits, coming from Brooklyn,” but underscored the philosophical differences between the House and Senate in predicting that he and Jeffries are “not going to be carbon copies.”

Rep. Adriano Espaillat (D-N.Y.), who has known both leaders for years, summed up their differences the way only a House Democrat from a neighboring borough could: “Schumer’s a nagger, … Hakeem is a consensus builder,” he quipped. “I think they’ll make a great team.”

It will be a far different dynamic from the three-decades-old friendship between Schumer and Pelosi, who came up in the House together before the former swapped chambers. But one thing won’t change: Schumer’s famous working of the phones. The Senate majority leader, who called Pelosi as many as three to four times a day, insisted that he and Jeffries will talk daily.

The two New Yorkers have already had plenty of experience working together in the policy realm. They’ve teamed up on issues like legislation on decriminalizing marijuana, public housing and handicap accessibility for the Broadway Junction station in their shared borough.

At times they’ve aligned in a classically Schumer fashion, holding joint press conferences back home on targeted local issues. A few years ago, they even produced a professionally staged video together on the need to eliminate harsh penalties for pot.

Schumer and Jeffries, 20 years apart in age, share a few other similarities. Both served in the New York Assembly: Schumer from 1975 — less than five years after Jeffries was born — through 1980, and Jeffries from 2007 to 2012.

But while Jeffries’ rise to the top rung of House leadership took just a decade, Schumer had a longer climb. He served 36 years in Congress and ran Senate Democrats’ campaign arm for two cycles before ascending to leader.

Schumer recalled meeting Jeffries for the first time close to two decades ago, when the junior New Yorker was a state assemblymember: “The minute you met him, you said this guy’s got it.”

Jeffries touted his own longtime ties to the upper-chamber leader, describing Schumer as someone who “cares about both the institution of the Senate and the Congress.”

“It will hopefully be as smooth a transition from one group of leaders to the next as is possible,” Jeffries said when asked about how he would replace Pelosi as Schumer’s legislative partner.

Of course, that brings their party back to the hometown factor — even if the newly elected House leader downplayed the role of their shared borough, joking only that “people in Brooklyn are excited.”

Another senior Democrat, Texas Rep. Henry Cuellar, observed with a touch of humor and apparent respect that the new duo’s biggest shared asset would be their notoriously fierce “New York politics.” He predicted that the pair would be closely linked, holding up two crossed fingers to demonstrate how tight he expects Schumer and Jeffries to be.

Cuellar described Jeffries as possessing a social ease that translates across the caucus’ ideological spectrum, but also knowing how to step in when needed: “He’s also told some of the lefties, ‘Hey, calm down.’ He’s not afraid to say, ‘Let’s do what we need to do.’”

Schumer agreed that his and Jeffries’ mutual hometown gives them an understanding of one another.

“First, getting along with all different kinds of people. Second: persistence. Don’t let barriers get into your way,” he said. “The ‘persist’ part is Brooklyn, all the way.”

Schumer and Pelosi worked hand-in-hand during former President Donald Trump’s administration, developing a close partnership that was instrumental in getting key Democratic priorities through the two chambers.

The new pair will face different challenges, with Schumer in the majority and Jeffries in the minority. As Republicans take control of the House, much of the Senate’s focus next year may center on the confirmation of Biden’s executive and judicial branch nominees. One of their first shared tests next year will be preventing a potential calamity over raising the debt ceiling.

Sen. Ben Ray Luján (D-N.M.), who worked with Jeffries in the House before moving across the Capitol, said that both the House leader and Schumer pointedly invite a “spectrum” of members to the table to weigh in on thorny topics — a quality that’s unlikely to change.

Still, Jeffries will have the distinctive obstacle of trying to procedurally kneecap the House GOP majority at every turn, starting with a possibly chaotic speaker election on Jan. 3. Current Minority Leader Kevin McCarthy hasn’t yet locked down the votes he needs to take the gavel, presenting Jeffries with something of an opportunity.

Sen. Chris Murphy (D-Conn.), a former House denizen, predicted that the GOP’s slim margin in the lower chamber would allow the Democratic minority to still play an instrumental role in the next Congress.

“It’s obviously going to be a very different relationship than one between majority leader and a speaker that are running majorities,” Murphy said before poking at a Republican conference that has been engulfed in turmoil since the midterm elections: “It’s still an essential partnership, because the governing majority in the House is going to [run] primarily through the Democratic caucus.”

That the party’s House caucus is now run by a member closer in age to Murphy than Schumer matters a lot, too.

Yet as they prepare to steer the Democratic agenda next year, Schumer and Jeffries are in sync on at least one thing about their town.

“He loves Biggie. I like Big Daddy Kane,” Schumer said. “His favorite diner is Tom’s, I like Purity Diner. But we both agree that Roma Pizza is the best pizza in New York.”