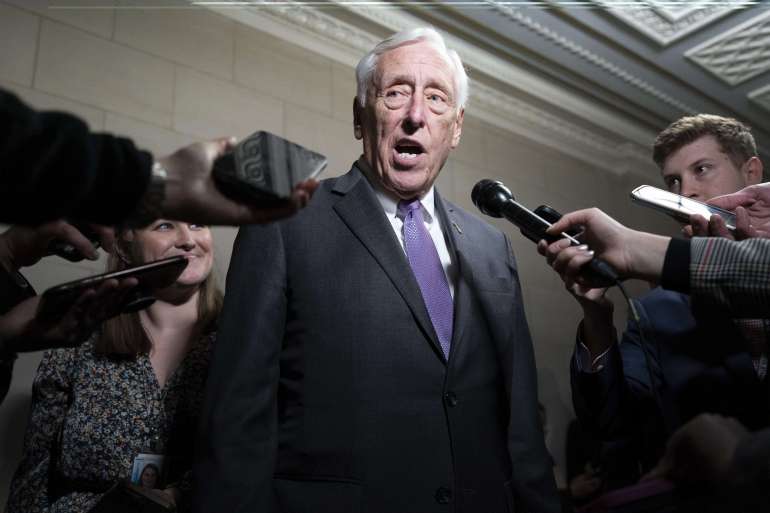 At the moment, Democrats are asking for about $25 billion overall more than GOP lawmakers are willing to give. Republicans have deemed that money unnecessary, arguing that Democrats largely achieved their domestic funding goals through party-line climate, tax, health and Covid aid bills.

And the current spending impasse is significant enough to see a spillover effect in talks on a must-pass defense policy bill, with Senate Minority Leader Mitch McConnell throwing cold water on Democratic interest in adding energy permitting or marijuana banking provisions to that measure.

House Majority Leader Steny Hoyer was noncommittal when asked if the two parties could reach an agreement on the spending package by next week: “We certainly hope so,” he said in a brief interview, “but I don’t know.”

“It’s absurd that we can’t get there on toplines,” Hoyer added, noting that a one-year stopgap spending patch is still on the table.

Settling for a so-called continuing resolution that would keep the government funded at current levels for the rest of the fiscal year, however, is hardly the note that the Senate’s two top appropriators — Vermont’s Patrick Leahy, the chair, and ranking Republican Richard Shelby of Alabama — want to strike as they retire from Congress.

Senate Majority Leader Chuck Schumer said Tuesday that “negotiations continue” on the government funding package, adding that “both sides must remain at the table and continue working.”

Should top Democrats attempt to add Sen. Joe Manchin‘s (D-W.Va.) energy-permitting language to either the defense policy bill or the spending legislation, they’re likely to encounter resistance from their own left flank as well as from McConnell’s party.

Rep. Ilhan Omar (D-Minn.), whip for the Congressional Progressive Caucus, said that the group is starting to survey its members on the Manchin-backed permitting language and found that “a lot of people might not be willing to support the rule” on the House floor if it were added to either bill.

Democrats and Republicans have pointedly disagreed over how to categorize the increasingly expensive issue of veterans health funding; the majority party wants to move it out of domestic spending and into its own separate category so that it doesn’t eat up other priorities.

“We’re about to run out of runway here, though I still think there’s a great chance we’ll get this done,” retiring Sen. Roy Blunt of Missouri, a senior Republican appropriator, said on Monday night.

“Even in the Senate, where things happen in a hurry,” Blunt said, warning that an agreement on overall funding totals needs to be reached soon to keep lawmakers on a reasonable track to finish before the end of the year. “Reading and doing all the things you have to do together before you’re happy to take that bill to the floor just takes time.”