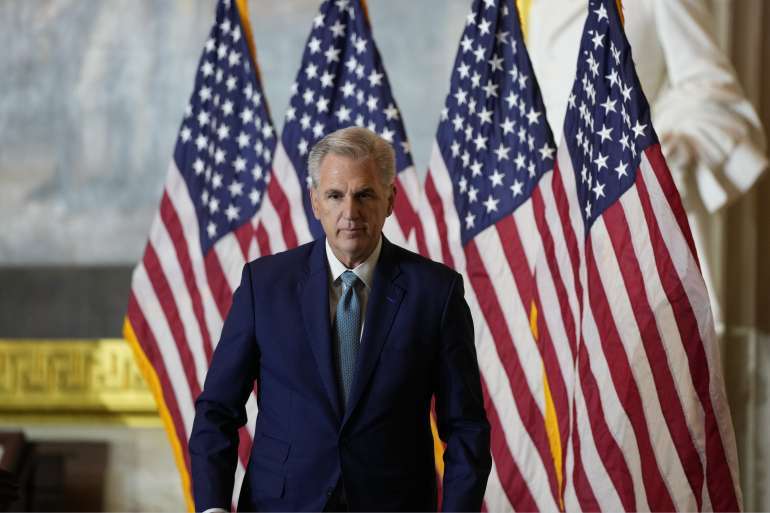 Opinions vary among GOP lawmakers about how the speakership vote will play out, with some betting on centrist Republicans’ willingness to put forward a more moderate option and others speculating about how many ballots they’ll need to ultimately decide the speakership.

While some members have privately floated retiring centrist Rep. Fred Upton as one option, the Michigan Republican will be nowhere near the Capitol for that vote on Jan 3. Instead, Upton and his wife will be on a ski trip. “I’ll be at 12,000 feet,” he said.

A growing number of members believe the House’s leader will not be elected on the first day of voting, let alone on the first ballot.

“My sense is, it’ll be multiple ballots — may take a number of days,” said one House Republican who offered a prediction on condition of anonymity, remarking that McCarthy critics want a “pelt” but that they have “no real backup plan.”

Interviews with this year’s crop of McCarthy opponents confirmed one thing that his allies are seeking to leverage in their favor: Unlike the 2015 conservative rebellion that ended with former Speaker Paul Ryan (R-Wis.), there’s no single, agreed-upon Plan B leader.

“To my knowledge, there’s not one alternative candidate,” said Rep. Michael Cloud (R-Texas), a House Freedom Caucus member who hasn’t tipped his hand on his McCarthy vote, adding that their discussions “have always been about changing the culture of Washington, D.C.”

Freedom Caucus Chair Scott Perry (R-Pa.) added that “a lot of people in the conference” could emerge as a speaker candidate.

One critical reason that no alternative name is out in the open: McCarthy critics know that the first aspiring challenger to go public will be pummeled by the Californian’s supporters. Some rank-and-file members say Rep. Andy Biggs (R-Ariz.) is trying to take those arrows right now; the Arizonan overwhelmingly lost to McCarthy in the conference’s internal election last month but on Tuesday launched an official bid against McCarthy anyway.

The majority of McCarthy detractors hail from the Freedom Caucus, as was the case in the 2015. But this year’s iteration of the group, which is most powerful when it moves in sync, is hardly on the same page. Some of its members argue that, because they’re split over electing McCarthy speaker, they should refocus their attention as a unit on demands over spending bills and other legislative priorities.

Meanwhile, critics of the Freedom Caucus lament that its anti-McCarthy members are simply moving the goal posts to extract maximum concessions from the GOP leader, while having no intention of definitively knifing McCarthy.

And one of those concessions — a compromise reached last month over the conference’s ability to depose a speaker — may be getting relitigated.

Even after the conference backed an amendment from Rep. Mike Turner (R-Ohio) that required the support of a majority of House Republicans to seek to boot the speaker, McCarthy critics say they don’t think the matter is closed.

Centrists have already warned McCarthy’s Freedom Caucus opponents that if they tank him, a backup speaker may get elected who they’ll like even less. Making good on that threat might require some House Democrats to vote present on Jan. 3, thus decreasing the total number of votes needed to win the speakership.

But it’s not clear if any Democrats would be willing to work with the GOP to help McCarthy out of a tight spot. And McCarthy has already publicly said he would not seek or accept votes from Democrats.

Rep. Don Bacon (R-Neb.), the most outspoken of the pro-McCarthy centrists, vowed they would “go full bore” if McCarthy’s bid gets scuttled over multiple rounds of balloting.

Anti-McCarthy conservatives “don’t have an alternative name, bottom line,” Bacon said. “There’s a large majority of us that are not willing to get rolled. … We’re not going to play nice guy on this.”

Moderates in both parties have been in touch about break-glass back-up plans if McCarthy fails to get 218 votes, as first reported by POLITICO — a fact that’s sparked accusations from Freedom Caucus-aligned Republicans.

One notable participant in those discussions is Frank Luntz, the veteran GOP pollster and close friend of McCarthy. Luntz has asked questions about Democrats voting present in the upcoming speaker vote during private talks with House members, according to Republicans and Democrats familiar with the exchanges.

Luntz attended a retreat with members of the bipartisan Problem Solvers Caucus last month in Longboat Key, Fla., where he discussed the topic. And while it’s not clear if the GOP leader had given Luntz his blessing to discuss the matter, their close relationship means some in McCarthy’s conference will tie the pollster broaching the subject to the Californian.