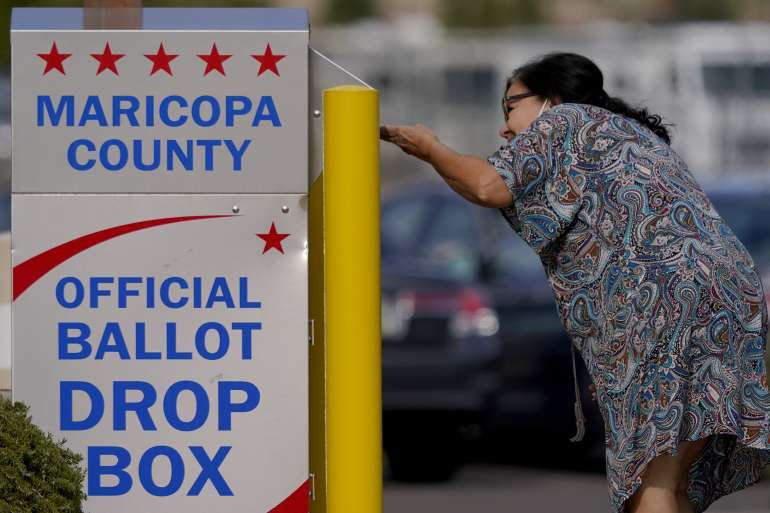 Altogether, the organizations funded 126 groups across 16 states, from national battleground states like Arizona and Pennsylvania to places like South Carolina and New Jersey, where most statewide races have not been particularly competitive.
“It was very clear that there was a mobilized constituency that cared about democracy, but it was on the wrong side,” David Donnelly, the veteran progressive operative behind the groups, said of conservative election activists after 2020. “And there wasn’t as big of a response to what we needed to have to defeat it.”

Donnelly, a longtime fixture in the good governance advocacy community, declined to reveal the funding sources behind the campaign. But the substantial budget and extensive operations of the PDC underscore the depths of progressive concern that exist over Trump-led efforts to change voter laws and election administration across the country. It represents a significant investment in state-based infrastructure during a time when progressives have feared too much attention and resources have been devoted to national infrastructure and institutions.

In addition to the $32 million PDC directly funneled, it also steered an additional $16 million directly from other funders to partner groups as well. Both numbers were provided to POLITICO by PDC.

As one point of comparison: The Conservative Partnership Institute, which has served as a hub of Trump allies — including attorney Cleta Mitchell, who was on the call where Trump tried to pressure Georgia officials to overturn the 2020 election — brought in $45 million in 2021, according to tax documents shared with the money-in-politics focused publication Sludge.

The group intentionally operated behind the scenes throughout the midterm election cycle, not conducting media outreach or even launching a public-facing website. POLITICO is the first to report on its existence and extensive funding of scores of groups.

Donnelly said the goal of his funding network was to “bring people to the fight, not just bring more policy wonks or bring more lawyers.” That meant supporting a broader network of groups that worked in local and state communities with voters and activists rather than a D.C.-based operation.

“We decided that it wasn’t going to be enough just to fund a bunch of election protection efforts or fund a bunch of candidates to run against election deniers,” he said. “ We needed to fund organization infrastructure, to bring more heft to the battles on democracy.”

Donnelly said that he kept the network under wraps throughout the cycle because, as a general principle, he doesn’t “believe in promoting work before we do it,” and publicizing the effort wouldn’t have been helpful to partner organizations. Now, with the 2022 election over, “the groups that worked in states deserve the credit … because I think they played an essential role in not just having democracy at the ballot but at the doors.”

The effort started with interviews with state leaders in the summer of 2021.

Angela Lang, the executive director of the Wisconsin-based BLOC, said funding from PDC helped her organization hire a “democracy organizer” helping on research and communications for her group, which works on mobilizing Black communities in Milwaukee, Racine and Kenosha. “I think the more groups the better, especially now, having conversations about democracy is super important,” she said.

Elsewhere in Wisconsin, PDC supported organizations that were urging jurisdictions to expand their early voting hours, with Donnelly citing a successful push in Green Bay to get the city council to approve more money to keep the polls open longer.

“There were 10 times as many speakers in support of the expanded hours of voting at that city council meeting where they appropriated additional money than there were those opposing it,” he said. “Those people didn’t come from nowhere. They were organized by local groups.”

Doran Schrantz, the executive director of Faith in Minnesota, helped lead a larger coalition of groups in her state called We Choose Us, which was focused on “expanding and protecting multi-racial democracy” in the state. That effort was already underway when the Pro-Democracy groups reached out, eventually sending $1 million to it, Schrantz said.

That money went toward staffing up the campaign, along with regranting some of that money to organizations in the We Choose Us coalition to run local programs.

“What struck me immediately was that [PDC] had an analysis about how to construct a protective of democracy and elections strategy that very much aligned with ours. It is about states, it is about state power and political infrastructure,” Schrantz said. “Not ‘we have a policy issue that we want to pass in D.C., can you rattle up some people to support that policy issue,’ which is a very different way of thinking about building infrastructure.”

It was the right way, Schrantz said, to counter “the very robust grassroots organizing on the ground that we could see was about ‘Stop the Steal.’”

Looking ahead, PDC and its partner organizations are hoping to capitalize over largely beating back “Stop the Steal” forces around the country in the midterm elections. In Minnesota, Schrantz mentioned advocating for a “democracy agenda” after Democrats unexpectedly captured full control of state government, pushing for things like automatic voter registration or exploring an independent redistricting commission in the state.

“We should be on offense in 2024, and ready to go, to continue to undergird and expand voting rights, especially in the states,” she said.

Donnelly said that his organizations are not going away, and are “going to continue to support groups building their capacity over time.”

But he did note some uncertainty among large donors in the space about whether the fight is over.

A concern he hears in the fundraising world is that some feel “like, ‘oh, we averted the kind of disaster scenario of all these elections deniers winning in key offices, therefore we don’t have to worry about this right now. Trump’s on the field, but he’s not as powerful anymore,’” Donnelly said.

“That is a whistling by the graveyard attitude,” he continued. “We narrowly held the line, and nobody is going away on either side.”