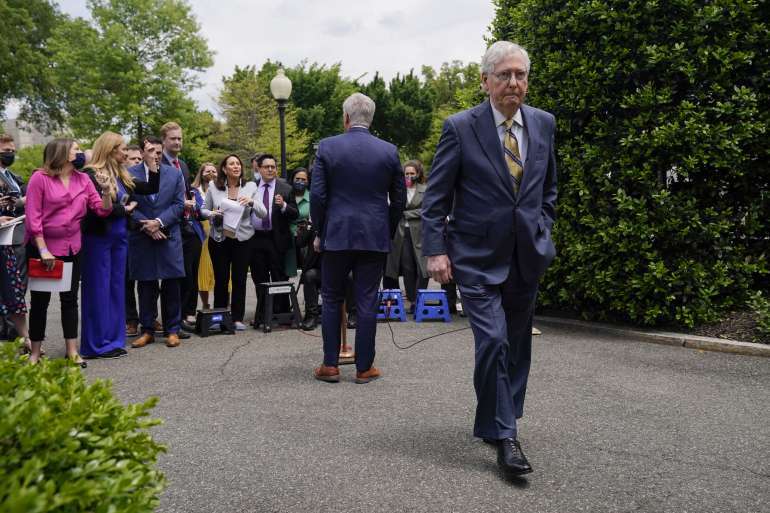 And while some McCarthy allies acknowledge that a spending deal would ease their to-do list in the new Congress, few House Republicans can be counted on to support it. McCarthy himself is aligning with conservatives who want to see Congress punt, thus denying Democrats a year-end win — while depositing a spending fight on the next speaker’s doorstep.

“I’m so disgusted by the fact that we’re here again,” said Cramer, who is undecided and criticized both the deal and delay approaches. “My concern is that a new House, very small majority, new leadership, is going to have to take over, and to have to start from behind? … That concerns me. That could have negative consequences.”

As he fights to become speaker and win over his doubters, McCarthy can afford to take a dim view of a big year-end spending bill while Democrats and Senate Republicans do the heavy lifting. Republicans are predicting — and in some cases, privately hoping — that the outgoing House Democratic majority can pass the legislation on its own.

McConnell needs at least 10 Republicans to avoid a filibuster, a painful task because House GOP leaders are likely to skewer the deal as another big Joe Biden-backed spending bill. And the Kentucky Republican prefers to have a majority of his conference on board, particularly as the Senate GOP holds a special meeting Wednesday that’s sure to include lengthy internal debate over the merits of cutting a bipartisan spending deal.

On the other side of the Capitol, the spending bill can’t be separated from McCarthy’s speaker election on Jan. 3 — and many Senate Republicans think passing it now would only help the House GOP in the future.

Kicking the government funding debate until next year “would require a very delicate balancing act between the House Republican majority and the Senate Democratic majority,” said Sen. Roger Wicker (R-Miss.), a McConnell ally. He added that it’s “better not to have that major hurdle that the new speaker, Kevin McCarthy, has to negotiate … it’s too much to ask.”

McCarthy, however, doesn’t seem to want the help. In a closed-door meeting on Tuesday, the Californian trashed the still-forthcoming spending deal, telling members he was a “hell no” on any agreement, according to several people in the room. Distancing himself from the talks, McCarthy described the process as Senate-driven — led by the retiring Appropriations Committee duo, Sens. Patrick Leahy (D-Vt.) and Richard Shelby (R-Ala.). No one else in the room spoke up to defend the deal, attendees said.

There are tough political calculations for McConnell as well. He faced his first opposition as GOP leader last month, and a rogue band of conservatives are regularly plotting to instill a more aggressive posture in the chamber’s Republican Conference.

His members will closely watch what kind of deal he negotiates — if there is one at all.

“If Senator McConnell rams through an omnibus — and he can if he wants to — I think he needs to be able to demonstrate vividly, with detail, why we would get a better deal doing it through an omnibus than through a Republican House,” said Sen. John Kennedy (R-La.), using the technical term for a spending accord that boosts agency budgets. “If my leader does ram it through and can’t explain why we can get a better deal doing it that way rather than waiting? He’ll be criticized.”

McConnell said on Tuesday that he prefers a broad deal that boosts defense spending. But he also made clear he isn’t going to wait around forever, saying Tuesday that Dec. 22 was the hard deadline to pass a bill: “We intend not to be here between Christmas and New Year’s.”

With a mix of leadership allies, moderates and retiring senators, McConnell can probably assemble the votes he needs if the spending measure comes together. But it won’t be pretty, and even some of his closest allies are on the fence about pushing through a package that will include changes to presidential election certification as well as billions of dollars in Ukraine aid.

“I’m sure there’s a lot of good in there. And a lot of really ugly in there as well. I haven’t even seen the text,” said Iowa Sen. Joni Ernst, a member of GOP leadership who is undecided. “It’s so hard to say.”

While Shelby takes a leading role with McConnell, McCarthy’s low regard for the spending talks is reflected by his top spending leader, Rep. Kay Granger (R-Texas). She acknowledged she’s essentially been on the sidelines of negotiations, describing her role as “second level.”

And some House GOP lawmakers already have knives out for Senate negotiators, who will need an additional week-long stopgap fix known as a continuing resolution to get the time they need to finalize any agreement. Rep. Chip Roy (R-Texas), a member of the conservative House Freedom Caucus, said of the emerging deal: “We’ll have a short-term [continuing resolution] so we can let Richard Shelby build a new monument to himself. No. Enough of that crap.”

McCarthy has repeatedly told his members he prefers a stopgap into the new year that gives him fresh leverage over government funding levels to House Republicans — despite the enormous headache it could pose. His posture reflects mounting pressure from the right side of his conference, where conservative Republicans are agitating to take a big chunk out of federal spending.

Those are the same GOP lawmakers who are also pushing significant budget cuts next year as part of a deal to lift the debt ceiling, yet another fiscal lift that will require bipartisan support. That’s Shaping up to be Congress’ toughest fight of 2023, though it’s not yet clear exactly how soon party leaders will need to act.

Senior House GOP lawmakers, like Alabama Rep. Robert Aderholt, have been warning for weeks about punting big spending decisions until next year, when the conference will be setting up a new Congress in addition to confronting the debt limit. There’s another big factor too: navigating a contested speaker’s race, with the smallest of margins.

“House Republicans are going to be very skeptical. McCarthy made that clear in conference today,” Aderholt said of his leader’s position on the spending package. “It will be good to get it off the plate now, if possible. But we’ll see.”

That’s a minority view among Republicans in both chambers, however. Sen. James Lankford (R-Okla.), a former House member and veteran of divided government, said the opaque negotiations this holiday season amount to a “new low. Even for us.”

Jordain Carney contributed to this report.