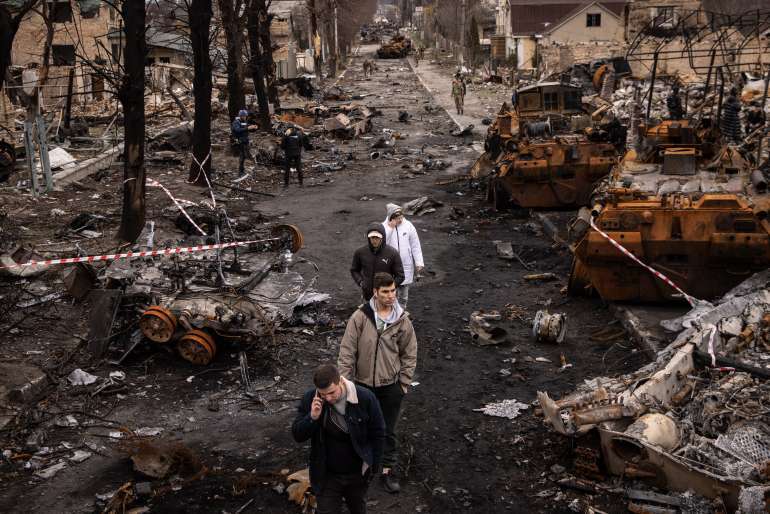 Kyiv’s pleas for help are increasing in urgency as its battlefield gains stall and Moscow continues its bombardment of Ukrainian cities. Russia has destroyed half of Ukraine’s energy infrastructure, the United Nations reports, with regular blackouts and power cuts leaving millions without electricity just as winter sets in.

Gen. Valeriy Zaluzhnyi, Ukraine’s top military leader, told the Economist that he believes Russia is mobilizing 200,000 new troops and could push to take Kyiv as soon as January. He begged for hundreds more tanks, infantry fighting vehicles and howitzers to help repel Russian forces, as well as missile defenses.

“We are balancing on a fine line. And if [the power grid] is destroyed … that is when soldiers’ wives and children start freezing,” Zaluzhnyi told the Economist. “What kind of mood the fighters will be in, can you imagine? Without water, light and heat, can we talk about preparing reserves to keep fighting?”

On Thursday morning, Austin and Milley briefed House members about the situation in Ukraine. They discussed sending Patriots to Ukraine, but said the decision had not yet been approved, according to one congressional aide and two other people familiar with the briefing.

Spokespeople for the Pentagon and National Security Council declined to comment for this story.

One plan under consideration is transferring a Patriot missile battery — a Patriot Advanced Capability-3 variant that is built to intercept ballistic missiles — to Ukraine, according to another person familiar with the discussions. Another option is contracting with Raytheon Technologies to build new systems from scratch, but that could take years.

One issue officials are grappling with is training Ukrainian soldiers to operate the complex system. One Patriot battery can need as many as 90 troops to operate and maintain it, and the associated training takes months. The Pentagon has not yet answered lawmakers questions regarding training, including where it would take place, the congressional aide said.

Patriots would be one of the most sophisticated weapons sent by the U.S. since the war began and would help Kyiv combat strikes from Russian aircraft and missiles this winter. But Ukrainian officials are also requesting new, longer-range weapons to help its armed forces launch counterattacks inside Russia.

Although the U.S. has declined to provide the 185-mile range Army Tactical Missile System, officials have considered sending the Boeing-proposed Ground-Launched Small Diameter Bombs, which has a range of roughly 100 miles, according to one U.S. official and one person familiar with the discussions. The weapon would combine the GBU-39 Small Diameter Bomb with the M26 rocket motor, according to Reuters, which first reported the news.

American officials and diplomats based in Europe have over the past two weeks discussed such a transfer, including potential ramifications, with allies in countries such as the United Kingdom and Germany, one of the U.S. officials said.

Officials are also discussing sending the Joint Direct Attack Munitions kits, according to one U.S. official. Ukraine’s Soviet-era MiG aircraft are not outfitted for the smart bomb kit, but Ukrainian forces could bolt them on — similar to how they have adapted their aircraft to carry antiradiation missiles. The Washington Post first reported the news that the Pentagon was considering sending munitions kits.

Lawmakers on Capitol Hill are also discussing ways to support Ukraine’s long-range battlefield needs without escalating the conflict. The conversations come amid increasing concern within the administration about an expanding military partnership between Tehran and Moscow — one that has allowed for the shipment of hundreds of drones to Russia in recent weeks as the country ramps up its attacks on Ukraine.

However, officials have so far refrained from making a definitive decision on long-range weapons in part because the administration is worried about provoking Vladimir Putin, those officials said.

While the U.S. plans to send the Patriot could signal a significant turning point in the Biden administration’s support for Ukraine, the continued hesitation by the U.S. and other allies to send long-range munitions raises questions about whether the Ukrainians will be able to make any meaningful advances on the battlefield in the coming weeks.

After Ukrainian forces made significant gains in the south and northeast during the fall, neither side has been able to make much progress in recent weeks. Near the southern city of Kherson, Ukrainian forces are stalled on the west side of the Dnipro River, as Russian troops consolidate their gains on the opposite bank.

In the Donbas region, the fighting is particularly intense near Bakhmut, where Russian forces — some of which were rerouted from Kherson — are making “incremental gains,” according to a senior military official. Ukraine continues to hold the city, however.

Russian forces appear to be moving heavy equipment to the frontlines in northeastern Ukraine and have begun conducting limited offensives, according to the Institute for the Study of War. And the recent drop in temperatures near Kreminna to consistently below freezing has allowed the ground to solidify, likely allowing tanks and vehicles to more easily conduct offensive operations.

“The battlefield is fluid and dynamic. And so, we’re going to continue to see these two sides push against each other as they try to gain an advantage,” the official said.

It’s unclear how the situation on the ground will change the pace of fighting in the coming weeks. Some U.S. officials and experts have previously said that the winter weather will stall operations and potentially allow a window for talks.

But the Ukrainians want to regain more ground in the east — a task made easier with more sophisticated weaponry — even as the snow falls.

The Ukrainians are also asking other allies — including those in Europe — for help propping up their long-range capabilities. Ben Wallace, the British defense minister, said this week he was “open-minded” about Ukraine’s request for long-range weapons systems.

So far, European and U.S. officials have remained in lockstep, publicly promising continued support for Ukraine for essentially as long as it takes. But the strain on stockpiles and the financial situation in an increasingly vulnerable Europe — where inflation stands at 11 percent — have sparked conversations between American officials and their counterparts about the extent to which they can continue to meet Kyiv’s demands — especially when the war has no end in sight.

U.S. officials are adamant that any potential peace talks between Kyiv and Moscow should be led by the Ukrainians. And officials in Kyiv, including President Volodymyr Zelenskyy, have so far not signaled any willingness to engage with Moscow until Russia stops bombarding the country and removes its troops from all Ukrainian territory.

“I believe that there will be a complete ceasefire on our part only when no invaders remain on our land,” said Brig. Gen. Oleksii Hromov, deputy chief of the Main Operational Directorate of the General Staff of Ukraine’s armed forces, according to reports on Thursday.