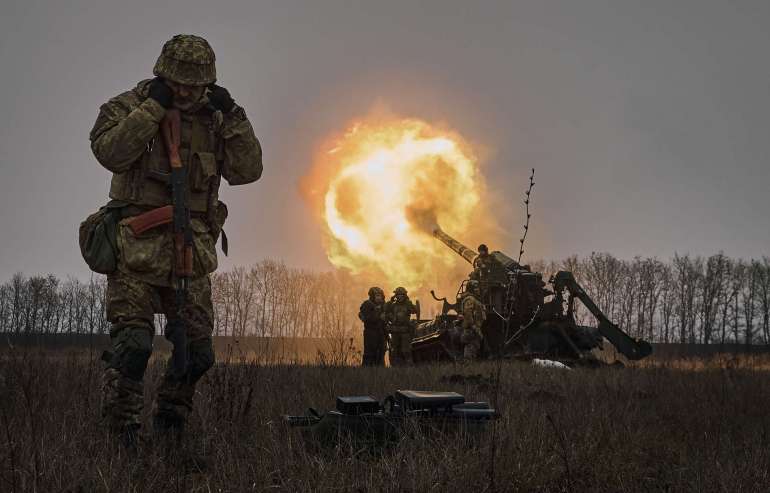 Most immediately, the administration is leaning on Congress now to pass more Ukraine funding in the omnibus spending bill currently being negotiated.

The White House is relying on some unlikely allies: moderate Republicans in the House who have voiced support for the funding, as well as Senate Minority Leader Mitch McConnell, who has steadfastly backed the assistance to Kyiv. Administration and Pentagon leaders have quietly huddled with GOP members in recent weeks to keep that momentum going despite pressure from some in their far-right faction.

“We want to make sure that they’re able to defend themselves and take on what is purely the ugliest aggression that’s occurred since World War II on a massive scale, on the part of [Russian President Vladimir] Putin, within Ukraine,” Biden said recently. “And there’s so much at stake.”

Republican Leader Kevin McCarthy, who is trying to assemble enough support to become speaker, said in October that Ukraine would no longer receive a “blank check” from Washington. And while he has since backtracked, McCarthy may find himself beholden to newly empowered lawmakers such as Rep. Marjorie Taylor Greene (R-Ga.), who pledged that “under Republicans, not another penny will go to Ukraine.”

Money won’t be the only thing the administration sends to Ukraine.

The Pentagon has ramped up preparations to arm Kyiv, finalizing plans to send the Patriot missile defense system, which should greatly enhance Ukraine’s ability to defend itself against attacks from the skies, including missiles and armed drones.

The Defense Department is also weighing sending other weapons, such as kits that would convert unguided aerial munitions into smart bombs, as well as explosives that would significantly extend Ukraine’s strike range. There are also, according to officials, discussions underway to expand training for Ukraine’s military at a U.S. base in Germany.

Currently, there are no plans for Biden to visit Kyiv, mainly because of security risks, according to several White House officials. But Biden spoke last week to Ukrainian President Volodymyr Zelenskyy, who urged his American counterpart to continue the flow of air defense weapons.

And there is growing concern in both nations’ capitals as to what the next phase of the war will hold.

Ukraine’s counteroffensive, so successful when launched in late summer, has stalled along both the southern and eastern fronts, allowing Russian forces to dig in. The cold winter has slowed the fighting — which has devolved into World War I-style trench warfare — but Ukrainian military officials this week warned that recent Russian troop and tank movements could telegraph another major assault in the weeks ahead, perhaps even toward Kyiv.

His war machine stalled and humbled, Putin has turned to long-range strikes and drones to destroy half of Ukraine’s energy infrastructure, causing regular blackouts and power cuts for millions. As temperatures drop dangerously, more Ukrainians may opt to flee the country, seeking shelter in neighboring nations and further straining the economies of other European nations.

To this point in the war, Biden has received high marks for reviving NATO and holding together a transatlantic alliance to stand against Putin. Senior White House aides have been impressed with European unity to this point. But they know that Biden’s job will grow more challenging during these next few difficult months.

The Western alliance, though continuing to side with Kyiv, has been strained by an energy crisis and fears of recession.

Biden has led Western leaders in pledging to support Ukraine “for as long as it takes,” but another wave of Ukrainian refugees would further test the continent’s resources. An energy crisis across Europe has forced significant cutbacks and the continent — where inflation stands at 11 percent — could be on the brink of a recession.

An ocean away from the fighting, the United States has a stronger economy and, therefore, more patience. Biden has repeatedly said that he would not pressure Zelenskyy to make a deal to end the war, and the Ukrainian president has vowed not to negotiate with Putin unless all of his nation’s land is returned.

But with the war having no end in sight, Zelenskyy’s sentiment has begun testing the patience of European leaders. White House aides believe that Biden will need to lobby European leaders to maintain the course as the attacks against civilians ramp up.

“Russia is again trying to put fear into the hearts of the Ukrainian people and to make it that much harder on them as winter is now upon them,” John Kirby, the National Security Council’s coordinator for strategic communications, said Friday. “We are going to remain undeterred in helping Ukraine defend itself.”