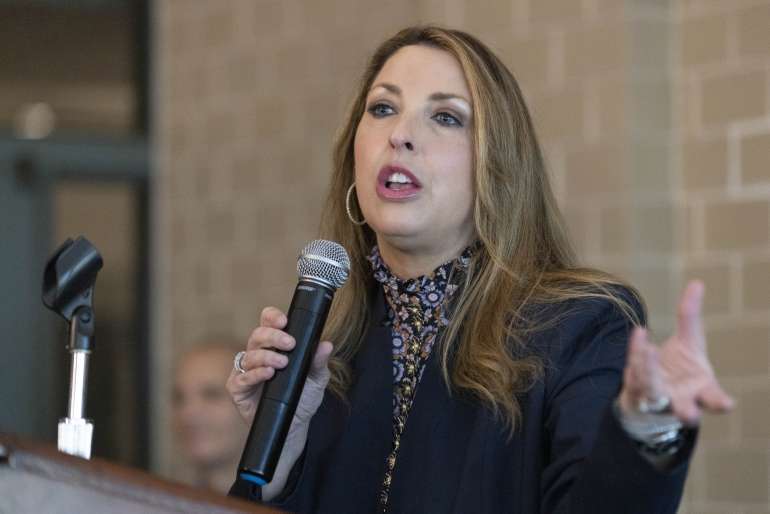 “That’s not a victory. Victory is our people in office making laws that protect our fundamental liberties.”

Republicans have experienced three election cycles of lackluster results, most recently during the midterms when a predicted red wave did not materialize.

Behind Dhillon, with 31 percent, was Mike Lindell, a right-wing commentator and top proponent of former President Donald Trump’s disproven stolen election claims. Throughout the weekend, conference-goers lined up to have their photos taken with the “MyPillow” CEO. Both Dhillon and Lindell walked onto the stage to pyrotechnics and standing ovations when they addressed the crowd.

Of the 1,150 conference attendees who took the survey, 10 percent said they were unsure who they wanted to become the next RNC chair. Just 2 percent of respondents chose McDaniel. The results do not add to 100 because of rounding.

McDaniel has so far maintained support from dozens of RNC members, despite a barrage of negative messaging from leading conservative figures. Her campaign has pointed to a letter of support sent earlier this month from 107 of the RNC’s 168 voting members, saying they support McDaniel’s reelection. That level of support exceeds the majority McDaniel would need to be reelected, though Dhillon says she believes she will continue peeling off McDaniel backers.

“Support for the chairwoman has only grown since her announcement, and she looks forward to speaking with each and every member to discuss how the party can continue building upon our investments and make the necessary improvements to compete and win in 2024,” said Emma Vaughn, McDaniel’s reelection spokesperson.

Throughout the weekend, Dhillon was featured on live broadcasts and conservative talk shows set up from the conference’s media row, culminating in a live podcast recording with commentator Tim Pool from the convention hall on Monday night.

The electronic straw poll, a link to which was sent to registered conference-goers, was conducted Monday by Rich Baris of Big Data Poll, a conservative firm.

Sixty-five percent of attendees said they strongly disapproved of McDaniel’s job as chair. A whopping 93 percent said members of the RNC “should listen to the grassroots” when deciding who to vote for as chair.

Charlie Kirk, the founder of Turning Point, sent an email to the 168 voting members of the RNC on Monday to “plead” with them to listen to grassroots conservatives who want them to pull their support from McDaniel. Kirk informed them of a new Turning Point political initiative, the Mount Vernon Project, to recruit new RNC members to challenge sitting members who are out of touch with grassroots activists.

This year’s RNC chair’s race, not typically an election that draws intense scrutiny or media attention, has become particularly contentious.

Dhillon has been critical of RNC expenditures on vendors with ties to the committee, though her law firm has also been paid by the RNC for legal work over the last several years.

Trump, over the weekend, said he liked both McDaniel and Dhillon and wasn’t taking sides in the race.