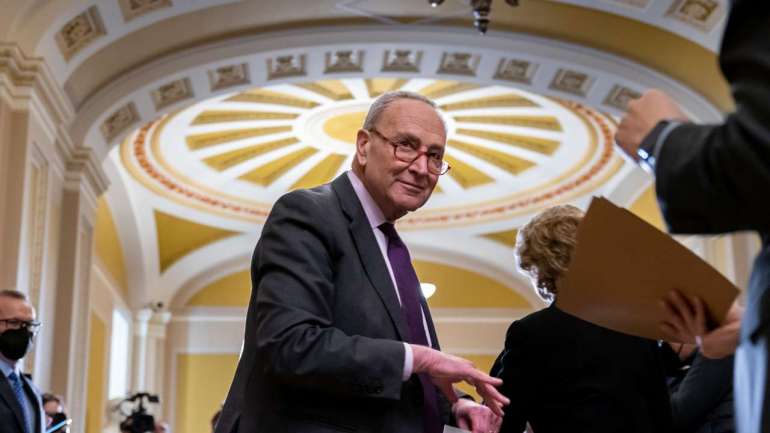 “I don’t anticipate that it would be real thorny getting to a final vote, but it might take a little time,” Thune said, adding that with the holidays looming, “the thing that somebody has to trade is time.”

The biggest hold-up to releasing the text on Monday came, instead, from a dispute among Democrats, first reported by POLITICO, related to the location of the FBI’s new headquarters.

House Majority Leader Steny Hoyer and other Marylanders were pushing to get language inserted into the bill that would favor their home state by changing the GSA’s criteria for selecting the location, while Sens. Mark Warner and Tim Kaine of Virginia were pushing to keep language out of the spending bill, keeping current guidelines in place that would favor Virginia.

Both sides ultimately agreed to disagree. Instead, they worked out a deal requiring the head of the GSA to meet with representatives from both states to consider their ideas on the FBI’s mission requirements, equity and a potential site’s sustainability, according to a Senate Democratic aide.

The final haggling and release of the text comes after staff and key lawmakers worked through the weekend to wrap up the legislation, with Senate Majority Leader Chuck Schumer quipping that staff and appropriators haven’t slept, working through Hanukkah and the World Cup finale. In a sign that the FBI standoff was the final puzzle piece, Senate Republicans started briefing staff on the details of the spending deal on Monday evening.

“We must wrap the whole process up and vote on final passage before the end of the week,” Schumer said. “It won’t be easy, but we are working hard so we can get it done.”

Senate GOP Leader Mitch McConnell has insisted that the upper chamber pass the measure by Thursday, or else Republicans will back a stopgap bill to fund the government into early next year.

The omnibus includes about $45 billion for Ukraine, exceeding President Joe Biden’s request for $37 billion, in addition to nearly $40 billion in disaster aid for storm and wildfire recovery. The bill is also loaded with unrelated policy provisions, including a bipartisan deal to revamp the outdated Electoral Count Act, legislation that would ban TikTok on government phones, an extension of pandemic telehealth flexibility, retirement savings incentives and much more.

Not included in the bill is billions of dollars in pandemic aid requested by Biden, an extension of the enhanced Child Tax Credit pushed for by Democrats, cannabis banking legislation and a popular tax provision that would have allowed businesses to immediately write off their research expenses, rather than over a period of five years.

Republicans on Monday were touting the nondefense funding figure as a win, having argued for weeks that Democrats didn’t need big social spending increases after passage of their party-line climate, tax, health and Covid-aid bills in recent years.

When excluding funding for veterans, domestic programs will receive more than a 5 percent boost this fiscal year, which McConnell chalked up to a cut after accounting for inflation. Democrats had pushed to include some or all of veterans funding in its own category outside of the nondefense discretionary bucket, so that it wouldn’t eat up other priorities.

Senate Majority Whip Dick Durbin said on Monday that he was “disappointed” about how the split between defense and nondefense funding was shaping up, noting that McConnell “is in a bargaining position that he’s taking advantage of.”

“We’re going to do our best in the closing days and hours of negotiating to make sure the domestic agenda is also improved, but he obviously does not want to do that,” Durbin said.

When asked about Durbin’s comment, Leahy fired back at his colleague’s frustration with a bill Leahy helped write: “Then he should vote against it.”

The spending bill will likely fuel tensions between McConnell and his right flank, which challenged his bid to be GOP leader and is increasingly looking to assert itself heading into next year, as well as Senate Republicans and their House counterparts.

Republicans will gather as a group on Tuesday for a closed-door lunch, where the spending bill will likely be a major topic of conversation.

Only a minority of the Senate GOP conference is likely to vote for the spending package. House Republicans, meanwhile, are expected to oppose it in bulk.

Rep. Kay Granger of Texas, the top Republican appropriator in the House, has not participated in negotiations of the bill. Thirteen House Republicans, led by Rep. Chip Roy (R-Texas), sent a letter on Monday night to Senate Republicans urging them to “take all steps necessary” to stop the spending bill and warned that they will “oppose and whip opposition to any legislative priority” next year of senators who support it, including McConnell.

Conservatives can’t prevent the massive spending package from passing — as long as 10 Senate Republicans unite with all Democrats to help it clear procedural hurdles. McConnell has indicated that he’ll support the package, as long as it passes by his self-imposed deadline of Dec. 22. Once the Senate passes the bill, it is expected to leave town until late January.

It’s unclear whether Senate conservatives will throw up procedural hurdles this week, however. Sen. Ron Johnson (R-Wis.) said on Monday that senators should get amendment votes, but added that “it sounds like everybody’s pretty confident they have the votes for it.”