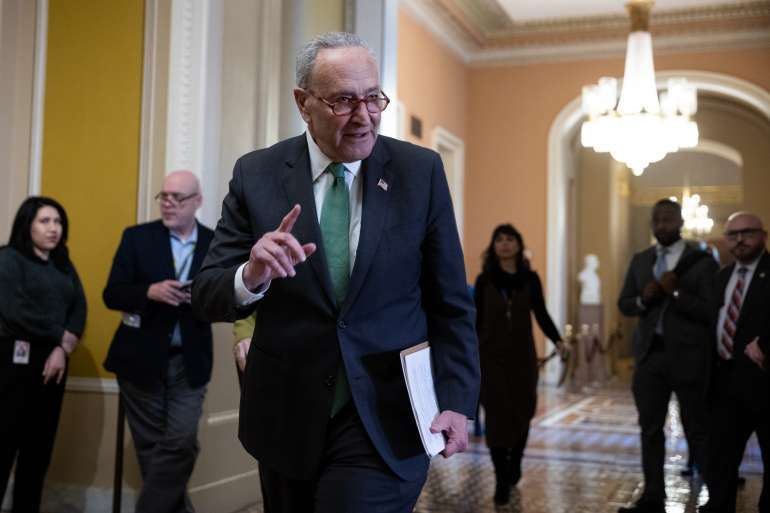 Here’s a look at what’s in and what’s out of the spending plan:

Ukraine aid: Congressional leaders want to give the country about $45 billion to help fend off Russian attacks, exceeding Biden’s request for $37 billion.

TikTok ban: Legislation pushed by Sen. Josh Hawley (R-Mo.) that would bar the download of the popular app on government devices made it into the final bill. The measure originally passed the Senate unanimously last week and comes as many states have enacted similar TikTok bans on government devices, heeding broad bipartisan concerns about the Chinese-owned app and its reach in the U.S.

Earlier end to Covid rules: The bill includes a bipartisan deal to end a Covid-era Medicaid policy that gave states more funding and barred them from kicking people off federally funded insurance, setting a new end date of April 1, 2023, instead of July 2023.

Telehealth extension: Tucked in the bill is an extension of HHS rules that made telehealth more accessible during the pandemic. But the provision, which extends the flexibility through the end of 2024, falls far short of a push from some lawmakers who wanted to make that flexibility permanent.

Preventing another Jan. 6: Senate Majority Leader Chuck Schumer noted earlier this month that the funding bill will include a bipartisan deal to revamp the century-old Electoral Count Act, which governs congressional certification of presidential ballots, after former President Donald Trump tested its limits on Jan. 6, 2021.

Lobster lifeline: Maine lawmakers successfully included a pause on new regulations they warned would cripple their state’s lobster industry. The provision delays new rules by six years, which critics argue will allow fisheries to put off actions that would prevent fishing gear from harming and even killing endangered whales.

Tax items on the table: Included in the bigger spending bill is a measure aimed at curbing fraudulent tax breaks reaped from land conservation deals and legislation to boost retirement savings in tax-advantaged accounts. The additions of both provisions follow uncertainty over whether there would be any tax title in the government funding bill at all.

An FBI compromise: A contentious dispute between Maryland and Virginia Democrats about the future location of the FBI headquarters delayed the release of the omnibus text on Monday night. Lawmakers ultimately settled on a compromise, directing the federal government to meet with representatives from both states to hear their ideas before making a final decision about where to put the building.

Security boost for former speakers: Language in the bill directs the Capitol Police to determine whether to extend protective details for former House speakers for a year after they leave office. The protection could be further extended, if warranted. It comes months after Speaker Nancy Pelosi’s husband, Paul, was severely injured during an attack in their home in San Francisco.

Makeup regulatory revamp: Lawmakers included the first overhaul of how cosmetics are regulated in the U.S. since the 1930s, giving the FDA greater authority to ensure that myriad lotions and makeup products are safe for use.

Allowing military students to play ball: The spending package undoes a provision, recently tucked into annual defense policy legislation, that requires student athletes from military service academies to perform two years of active duty service before they can get a waiver to play professional sports. The spending bill allows student athletes to seek a waiver and defer that service.

Boost for NLRB: Lawmakers increased the budget for the National Labor Relations Board by $25 million for the first time in nearly a decade — a top priority for unions amid a surge in union organizing across the country. Its funding now exceeds $299 million.

Popular tax provisions tossed: An extension of the enhanced Child Tax Credit pushed by Democrats and a provision allowing businesses to immediately write off their research expenses, rather than over a period of five years, didn’t make the final cut.

Cannabis banking legislation: The so-called SAFE Banking Act, which would give the cannabis industry increased access to financial services, remains on the cutting room floor amid opposition from Senate Minority Leader Mitch McConnell.

OAMA is axed: McConnell also objected to the inclusion of the Open App Markets Act, legislation aimed at promoting competition and reducing costs for consumers in the app market.

Helping pregnant workers: Legislation that would expand protections for pregnant workers, called the Pregnant Workers Fairness Act, got left out of the bill after being stalled in the Senate for months despite support from groups like the U.S. Chamber of Commerce, the ACLU and the United States Conference of Catholic Bishops.