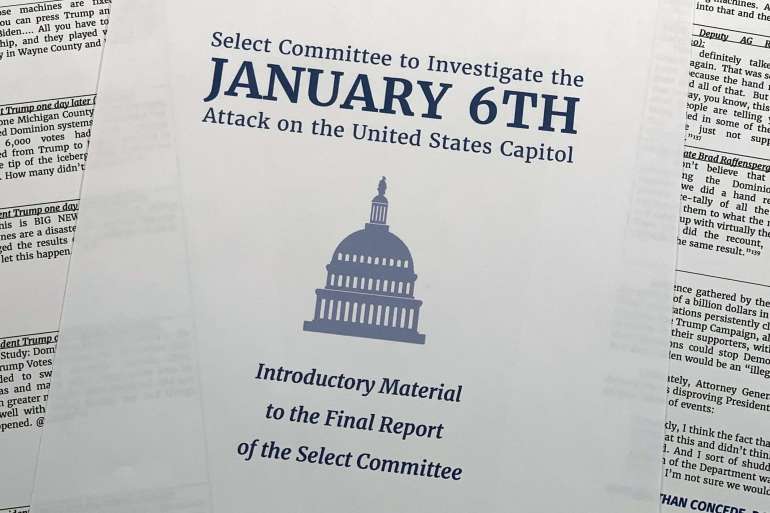 Although the witnesses generally did not cooperate with the select panel’s questioning, the transcripts shed new light on the volume of evidence that investigators hold. Publix heiress Julie Fancelli was read text messages about a contentious dispute over former Fox News host Kimberly Guilfoyle’s request for a $60,000 speaking fee. Conservative activist Alexander Bruesewitz was shown a message from the “Stop the Steal” group chat from Rep. Paul Gosar (R-Ariz.) telling them on the evening of Jan. 6 they were on lockdown in his congressional office.

McDonald, the Nevada GOP chair, was shown texts and emails related to the certification of Nevada’s election results. And Trump campaign operative Michael Roman, who also turned over documents including encrypted Signal messages to the select panel, was shown emails between him and Trump lawyer Alex Cannon.

The final report will include eight chapters, and the foreign influence section will appear as one of four appendices. The first two appendices are focused on Capitol security and the slow mobilization of the National Guard to respond to the Jan. 6 riot by Trump supporters intent on disrupting the certification of his loss to Joe Biden.

The third appendix covers the work of the select committee’s so-called “green team,” which scrutinized the money trail behind the “Stop the Steal” rally on the Ellipse that Trump headlined on Jan. 6, which quickly metastasized into a Capitol siege. Committee members have raised the prospect of potential campaign finance violations related to the pre-riot rally.

The full report is expected to surpass 800 pages in length, cataloging Trump’s multi-front bid to subvert the 2020 election and prevent Biden from taking office. When those plans failed, the select committee has outlined, Trump exhorted his supporters to descend on Washington and pointed an angry crowd to the Capitol, where outnumbered and under-prepared police officers were quickly overwhelmed by the violent mob.

The select committee has spent months unspooling portions of that story, alleging that Trump committed multiple crimes in his quest to corruptly seize a second term. But the committee’s final report will put the definitive stamp on a year and a half of investigative work that successfully cracked elements of Trump’s inner circle as lawmakers pieced together the former president’s scheme.

The report will also mark the select committee’s effective passage of its investigative torch to federal prosecutors, who can continue their probe of Trump-backed election subversion outside of Congress’ limited timeline. The select committee has begun sharing much of its evidence with the Justice Department in response to a Dec. 5 letter from special counsel Jack Smith, who asked the panel for its full collection of evidence and witness transcripts.

A group of House Republicans released a separate report Wednesday afternoon detailing security failures that preceded the Jan. 6 attack. Their report laid much of the blame for the attack at the feet of congressional Democratic leadership and knocked the Capitol Police for insufficient training and equipment prior to the insurrection.

The GOP report primarily consists of long-public information about debates within the Capitol Police and among security officials about how to prepare for Jan. 6, with the addition of some color culled from the text messages of former House sergeant at arms Paul Irving. The report closely chronicles Irving’s contacts in the run-up to and on Jan. 6 amid the chaos as authorities worked to regain control of the Capitol.

The alternate report was led by five Republican lawmakers initially tapped by Minority Leader Kevin McCarthy to sit on the Jan. 6 select panel. Speaker Nancy Pelosi had initially invited Republicans to recommend up to five picks for the committee, but ultimately objected to the selections of Reps. Jim Jordan (R-Ohio) and Jim Banks (R-Ind.), leading McCarthy to pull all of his choices in protest of Pelosi’s decision.

Omitted from the GOP report is recently released footage showing that congressional leaders, while sheltering from the violence on Jan. 6, frantically called security officials and Pentagon leaders to expedite assistance to the Capitol. It also omits mention of McCarthy’s own heated call with Trump as the violence ensued, as well as tweets from Trump that stoked the fury of the mob — though it quotes subsequent tweets from Trump urging rioters to support Capitol Police.