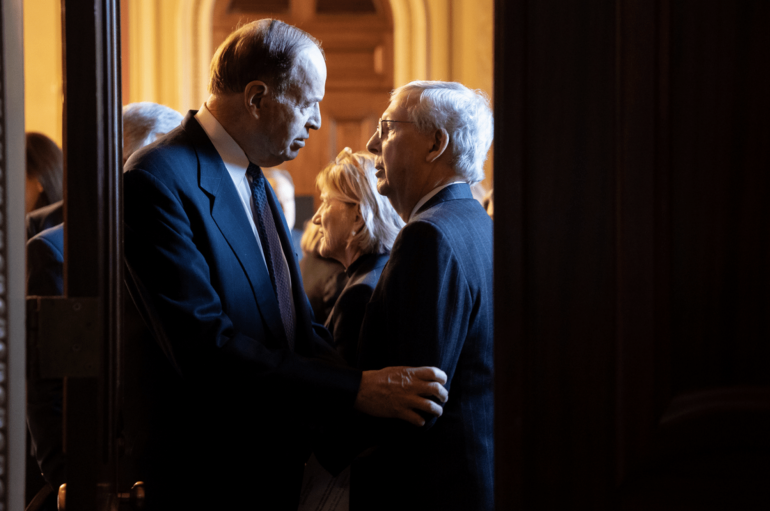 “Right now … we don’t have an exit plan,” said Sen. Lisa Murkowski (R-Alaska), who planned to go home and unpack her suitcase in anticipation of a missed flight to Alaska on Thursday morning.

But there were still some small glimmers of hope that a deal could be salvaged. Roughly an hour and a half after senators were sent home empty-handed, Minority Whip John Thune (R-S.D.) said: “There’s been some progress made.”

“I wouldn’t say a breakthrough yet, but there’s progress,” Thune added. “[But] if they get something locked in … I think the votes could start happening tomorrow morning.”

The biggest roadback stems from a proposed amendment offered by Republican Sen. Mike Lee of Utah that ties funding for the Office of the Executive Secretary at Department of Homeland Security to the Biden administration keeping Title 42, or Trump-era border restrictions tied to the pandemic.

Democrats had offered to give Lee a vote on his amendment at a 60-vote threshold. But senators and aides said they continue to haggle over a push by Lee and other Republicans to lower the threshold to 51 votes.

Lee teed off in a series of tweets, accusing Democrats of being “terrified” of giving him a vote at the lower threshold because it would likely have enough Democratic support to get added into the year-end spending bill. Because of the Senate’s narrow margins, Republicans would only need to pick up the vote of one Democratic senator.

“After getting literally everything they want in this 4,155-page monstrosity, the Democrats won’t give us an up-or-down vote on an amendment to preserve Title 42. Why? Because it will pass, and that terrifies them because they want chaos on the border,” Lee tweeted.

A Senate Democratic aide described Lee’s amendment as a “poison pill” that it would “kill the omnibus.” The aide didn’t rule out that Democrats could offer a counter-proposal that would provide cover for their own members, noting the negotiations are ongoing. Under that scenario, both amendments would fail but give senators a landing spot and a way out of the stalemate.

Sen. Debbie Stabenow (D-Mich.) said after exiting a meeting in Schumer’s office that they are “working on a path” that would hopefully “get things done in the Senate as soon as possible.”

“We have to have an omnibus. That’s essential,” Stabenow said, calling Lee’s amendment a “poison pill” that would “make it difficult to pass the omnibus in the House.”

A number of House Democrats would likely support the language to maintain the Trump-era policy, citing conditions at the border. But dozens of the caucus’ liberals would probably revolt, possibly blowing up the entire bipartisan spending bill.

Some Democrats even privately speculated Wednesday night that the House might have to vote first on the spending bill to avoid the border drama, though no plans had been formally set as party leaders strategized into the night.

GOP senators warned Wednesday night that a lack of an agreement to vote on the funding bill ramps up the chances that McConnell will make good on his threat, backing a short-term spending fix into early next year when Republicans have more leverage with a House majority.

“If we don’t get an omnibus passed by tomorrow then Senator McConnell has said he’s for a [continuing resolution] into next year, so it looks like we’re on a path to a CR,” said Sen. John Cornyn (R-Texas), a close McConnell ally.

If Schumer tries to plow forward with the omnibus, Cornyn said Republicans could leave and deprive him of enough votes to advance the bill. Meanwhile, McConnell, when asked about his Thursday deadline, quipped, “That’s tomorrow.”

Murkowski also said the stalemate increases the possibility of a short-term funding fix, rather than the sprawling package that would boost federal agency budgets for the fiscal year.

“Is that a desirable outcome? As one who’s been working hard to get things wrapped for the year, that is not my preferred outcome,” said Murkowski, an appropriator who worked on the bill.