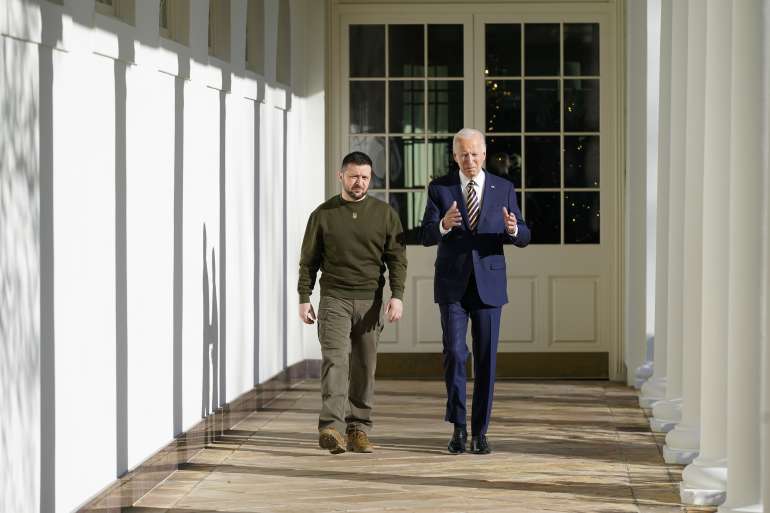 Zelenskyy landed at Joint Base Andrews just before noon, flying on a U.S. government C-40B aircraft from Rzeszów–Jasionka Airport in Poland, about 70 miles from the Ukrainian border, according to a flight tracker.

The airport itself has played a critical role in the war as a staging ground for much of the weaponry Western countries have sent to Ukraine, as planes full of munitions and other materiel land there before being driven across the border to the front lines.

Zelenskyy’s high-stakes visit comes as Kyiv prepares to dig in for a brutal winter. Hours before he was due to land in Washington, the Ukrainian president visited the front in Bakhmut, where the heaviest fighting is taking place. He will be on the ground for only a few hours before returning to Ukraine, a senior administration official told reporters on Tuesday.

“It’s a historic visit that will cement our partnership with Ukraine for the foreseeable future,” said Michael Carpenter, the U.S. ambassador to the Organization for Security and Cooperation in Europe. “So many Ukrainians are without electricity, without heat without light. This will be a symbolic sign that the United States is with them for the long haul.”

The visit is an opportunity for Biden to show the administration’s continuing support for Ukraine ahead of Republicans taking over the House in January. Officials in Washington and Kyiv fear that the new GOP-led Congress may be less willing to funnel money into the conflict, even as Moscow continues to bombard Ukrainian infrastructure, leaving millions of people without power. Ukrainian officials have expressed concern in recent days that Russia is planning a new offensive to take Kyiv as soon as January.

Rep. Ralph Norman (R-S.C.), a Freedom Caucus member, said he did not plan to attend Zelenskyy’s speech Wednesday night because he is opposed to any further government spending on Ukraine.

“We have a total SELLOUT with this Omni spending monstrosity with NO OFFSETS!!” Norman wrote in a text to POLITICO. “I’m against anymore funding for Ukraine and his words will not change my mind!!”

Yet the White House is confident that support for Ukraine will remain “broad, deep and bipartisan,” the official said.

“As the year draws to a close, as we head deeper into winter, as we continue to provide Ukraine the capabilities it needs on the battlefield, as we continue to surge diplomatic support and solidarity to Ukraine, this moment felt like a good opportunity for them to be able to have this engagement — this personal face-to-face engagement — and for President Zelenskyy to have this opportunity to address the American people,” the senior administration official said.

Senate Majority Leader Chuck Schumer pointed to votes this week to confirm the U.S. ambassador to Russia and approve a spending package that includes $45 billion in emergency assistance to Kyiv as evidence that America is standing solidly behind Ukraine.

“By passing this omnibus and confirming an ambassador, we can send President Zelenskyy back to Ukraine with the message that the Senate, the Congress and the American people stand unequivocally behind the people of Ukraine, and we’re backing that up with real dollars and real resources,” he said.

While in Washington, Zelenskyy will have an extended sit-down with Biden and a meeting with key members of the national security team and Cabinet, including Defense Secretary Lloyd Austin and Joint Chiefs Chair Gen. Mark Milley. During those meetings, the Ukrainian team is expected to press the administration to transfer long-range weapons and high-powered drones that Washington has been hesitant to give.

The two presidents then plan to hold a joint press conference in the East Room of the White House at 4:30 p.m., before Zelenskyy heads to Capitol Hill to speak to Congress.

Although senior administration officials have been working on arranging the visit for weeks, very few people knew about it until this week. The White House formally invited Zelenskyy to come to Washington on Dec. 14, but it was not confirmed until Sunday, according to the senior administration official. At that point, the White House notified Speaker Nancy Pelosi’s office.

The two leaders will discuss the way ahead on the battlefield, the capabilities and training the U.S. and allies will continue to provide, sanctions, economic and energy sector assistance, and humanitarian aid, the official said.

The visit comes just days after the Pentagon announced it is expanding training for Ukraine’s military. Under the new plan, the U.S. would train roughly 500 Ukrainian soldiers a month on sophisticated tactics for coordinating infantry maneuvering with artillery support.

The U.S. plans to train Ukrainians outside of their country on the new Patriot battery, a complex system that requires as many as 90 troops to operate and maintain, the official said. Once trained, the Ukrainian armed forces will man the system in-country.

The administration still has no plans to send U.S. troops to fight in Ukraine, the official stressed.

“The president has been very clear that we are going to lean forward and be robust in our support for Ukraine on the military, economic, energy, and humanitarian fronts, but we are not seeking to engage in a direct war with Russia,” the official said. “Nothing about that will change tomorrow.”

The aid package the administration announced Wednesday includes $1 billion from the Presidential Drawdown Authority, which allows the Pentagon to transfer weapons in its inventory to Ukraine, as well as $850 million from the Ukraine Security Assistance Initiative.

The $850 million in USAI funds allows the administration to contract with industry for thousands of artillery rounds, rockets, tank ammunition and satellite communications terminals.

Asked whether Biden will press Zelenskyy to end the war diplomatically, the official said Kyiv will decide when to negotiate, and the administration does not believe talks are imminent.

“Russia could, of course, end the war tomorrow by pulling out of Ukraine. They show no intention of doing so and no intention of seriously sitting down to commit to doing so,” the official said. “So, we do not see diplomacy that would lead to an end to the war on just terms as being on the very near-term horizon.”