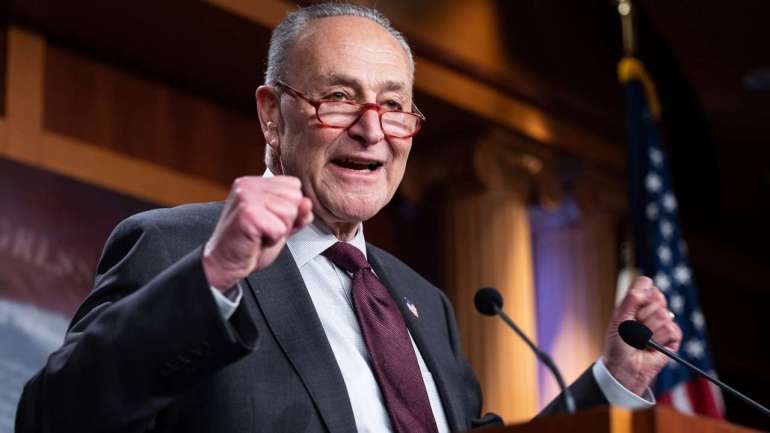 Congress now appears to be on a glide path to pass the spending package, which gives the Pentagon a 10 percent budget boost, includes about $45 billion in emergency aid to Ukraine and provides nearly $40 billion for disaster aid. The legislation is the final item on lawmakers’ to-do list before they leave for the year, with many eager to get out of town as a winter storm threatens to lock down half the country.

Because of the size of the bill, the Senate will also pass a stopgap patch to extend federal cash through Dec. 30, since government funding expires at midnight on Friday. The move, which is routine, buys extra time to formally enroll the bill and get it to President Joe Biden’s desk for his signature.

“Unfortunately the process takes a long time to do and it will not be to us … before midnight tonight,” he said on the floor.

All told, the Senate voted on a total of 15 amendments during an 18-vote series and approved eight, an effort that would normally drag on for hours but happened with relative speed. Senators largely stayed in their seats at the urging of Schumer, motivated by the prospect of missing a flight home as wintry weather threatens to upend holiday travel plans.

In keeping with the holiday spirit, small Santa hats adorned the hand sanitizer bottles sitting on the Senate dais.

Among the amendments added to the omnibus is one from Sen. Jeff Merkley (D-Ore.) that would add workplace protections for nursing mothers, known as the PUMP Act, which was approved in a 92-5 vote.

Senators also added a proposal from Sens. Bill Cassidy (R-La.) and Bob Casey (D-Pa.) in a 73-24 vote that attaches the Pregnant Workers Fairness Act to the year-end spending bill. That measure, which requires employers to provide pregnant workers with accommodations like bathroom breaks, has been stalled in the upper chamber over GOP concerns about religious liberty exemptions.

In a voice vote, the upper chamber easily adopted a provision from Sens. Lindsey Graham (R-S.C.) and Sheldon Whitehouse (D-R.I.) that allows the seizure of Russian assets to be used as Ukraine aid. Senators also unanimously approved a tweak allowing states to use leftover federal pandemic aid for infrastructure, in addition to a proposal that extends pay and benefits to a Navy lieutenant currently jailed in Japan.

Defeated amendments include one from conservative Sen. Ron Johnson (R-Wis.) that would strip funding for earmarks, or federal cash for lawmakers’ home-state projects, in the bill.

Swift passage of the mammoth spending package is a sharp turn from Wednesday night, when senators left the Capitol mired in gridlock over how to handle a politically tricky GOP border amendment. If approved, that proposed Republican-backed change could have derailed the entire package, sparking a revolt from House progressives.

In the end, senators resolved the impasse by voting on two dueling border proposals, both of which were defeated, eliminating a major headache for House Democratic leaders.

The main hang-up centered on an amendment from Sen. Mike Lee (R-Utah), which aimed to tie Department of Homeland Security funding to the preservation of Title 42, or Trump-era border restrictions related to the pandemic.

Lee had demanded a lower majority-vote threshold on his amendment, hoping to sway some Democrats who support the Title 42 policy. If even one Democratic senator had joined with all 50 Republicans to add the proposal to the bill, it would have tanked the broader spending agreement, generating pushback from House progressives.

Instead, Democrats who support Title 42 were able to avoid that politically difficult vote, thanks to a competing proposal from Sens. Kyrsten Sinema (I-Ariz.) and Jon Tester (D-Mont.) that would have maintained Title 42 while increasing funding for immigration courts and other border-related issues.

CORRECTION: Due to an editing error, the incorrect date for Thursday’s votes was used in an earlier version of this story.