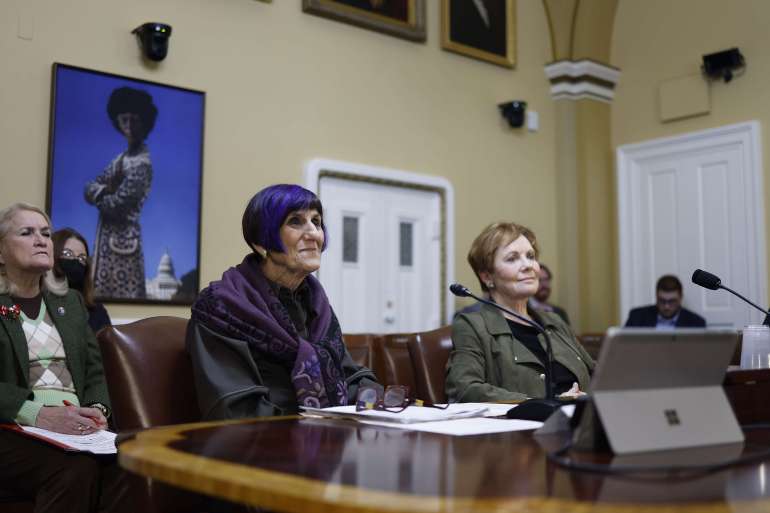 Speaker Nancy Pelosi, in what she said was likely her last floor speech and perhaps her shortest in the role, applauded Appropriations Chair Rosa DeLauro (D-Conn.) as a “maestro with a baton” for shepherding the bill through and thanked the staff who made it possible, while marking the coming Christmas holiday.

“Members have planes to catch, gifts to wrap, carols to sing, religious services to attend to,” she said, adding that the time reminded her of an English song: “Christmas is coming, goose is getting fat, please put a penny in the old man’s hat.”

The bill was “truly a package for the people,” Pelosi concluded.

Like anything in this bitterly divided Congress, the path to passage of the spending package has been winding and slow. Resistance from conservatives held it up for days in the Senate, though Majority Leader Chuck Schumer ultimately reached a time agreement on Thursday that will prevent weekend House votes.

Lower-chamber lawmakers had eagerly hoped to approve the bill overnight Thursday in time to catch early Friday flights out of Washington. But a bureaucratic backlog in processing the 4,000-page bill forced the House to punt its votes to mid-morning on Friday.

The delays have frustrated some members, who have re-booked and canceled countless flights in the last 24 hours, though many — roughly 40 percent of the House — have opted to vote by proxy instead, taking advantage of a pandemic-era measure that the incoming GOP majority plans to nix. Still more members are expected to vote by proxy on Friday, which may mean the final House vote this year will be among the most sparsely attended this Congress.

Even the fate of House members’ annual trip to the Middle East to visit U.S. troops for Christmas was in question.

The House won’t take its first votes on the bill until just before lunchtime Friday, and while members and staff hope to move quickly, any number of GOP procedural tactics could upend those plans.

The bigger problems behind the delay in reaching a spending deal, however, lay far beyond the floor schedule. The House accomplished just half of its appropriations work on the floor, while the Senate did literally none in this contentious midterm year.

The two parties didn’t even reach an agreement on how much money to spend in total until Dec. 13, a delay made worse by a Senate runoff in Georgia the week before that — and even then, they wouldn’t settle on a top-line spending number until this week.

House Republicans, meanwhile, all but refused to take part in government funding talks, with Minority Leader Kevin McCarthy under intense pressure from his party’s right wing as he seeks to claim the speaker’s gavel with a flimsy majority.

In fact, McCarthy took a particularly fierce attitude toward the bill, including going to the upper chamber to lobby against it before Senate Republicans earlier this week. And he used his privileges as a party leader to speak in opposition to the legislation for roughly 25 minutes on the House floor Friday, denouncing it as a “monstrosity and one of the most shameful acts I have seen in this body.”

Privately, however, House Republicans are breathing a sigh of relief that the issue of government funding will be off their plate for the time being, particularly as they prepare to enter the majority with a paper-thin majority.

Among the funding bill’s other provisions: Nearly $45 billion in aid for Ukraine; bipartisan election reforms intended to prevent another Jan. 6 attack; a ban on the Chinese-owned app TikTok on government devices; and new incentives for retirement savings.