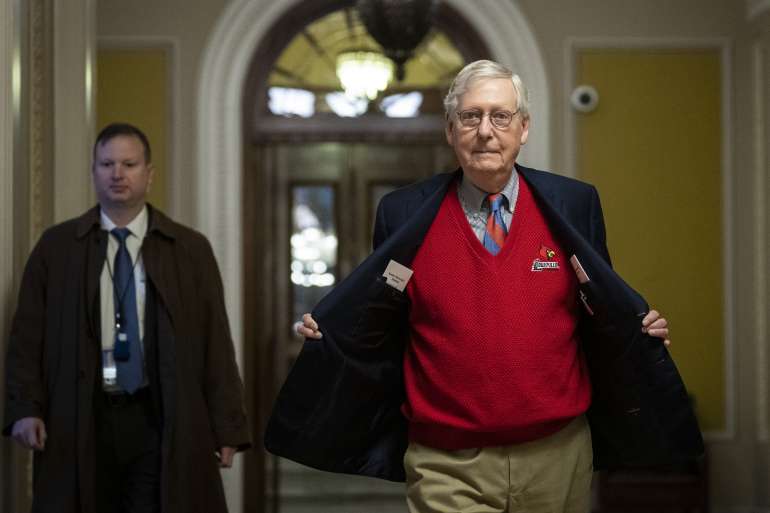 “I think we could’ve repelled a Chinese airborne invasion of Washington that day,” he said.

Yet the extraordinary conversation underscored the intense fears and instability that gripped Washington in the two weeks between the Jan. 6 assault and Biden’s ascension to the presidency. Those fears were prevalent throughout O’Brien’s testimony, a 210-page transcript of which was released Friday.

O’Brien, the Biden White House and aides to McConnell did not immediately respond to requests for comment.

In his testimony, O’Brien described urgent calls and texts from Senate allies, including McConnell, not to resign during the final days of Trump’s presidency — calls he said were spurred on by news reports that he had been considering stepping down. During the Jan. 6 riot, Sen. Mike Lee (R-Utah) called him and put McConnell on speaker phone, O’Brien recalled.

“Senator McConnell was telling me, and Senator Lee, that I needed to get back to Washington and that I couldn’t resign,” O’Brien said.

Even more notably, O’Brien said, he received a similar message in two calls with Biden’s incoming national security adviser, Jake Sullivan, who O’Brien said appeared to be conveying the sentiment of Biden himself.

“Jake had asked me not to resign and to stay in place as national security adviser,” O’Brien testified.

“Did he ask you to convey his — or the incoming president’s desire that you stay in place as national security adviser?” an unidentified committee investigator asked.

“So that was my takeaway,” O’Brien said.

Others who reached out and urged him not to resign included Sen. Ben Sasse (R-Neb.) and former vice president Dan Quayle.

Despite his explosive testimony, O’Brien was featured minimally in the Jan. 6 committee’s final report. The panel noted that he informed Trump and his allies that he knew of no substantive evidence of widespread election fraud and also indicated he had heard concerns about violence from counterprotesters on Jan. 6. Accounts of his contacts with Pence, McConnell, Quayle and the Biden transition were not referenced. The panel also referenced a text message that Lee sent to O’Brien that appended a voice mail he received from Rudy Giuliani on the evening of Jan. 6.

O’Brien also raised at least some doubts about an exchange that Jan. 6 committee star witness Cassidy Hutchinson said she had with him by phone. He said the exchange Hutchinson described having with him was “unlikely” to have occurred because he would have gone straight to Meadows rather than through her.

“I had walk-in privileges with Mark,” he said.

An attorney for Hutchinson did not immediately respond to a request for comment.

O’Brien’s deputy at the time, Matthew Pottinger, resigned shortly after Jan. 6, ascribing his decision to Trump’s actions during the riot, particularly his tweet attacking Pence. Pottinger testified publicly to the Jan. 6 committee during its series of hearings over the summer.

In his wide-ranging testimony, O’Brien also described speaking with then-Vice President Mike Pence within minutes of his evacuation to a loading dock beneath the Capitol where he was sheltering amid the riot. O’Brien said he recalled being on the phone with Pence at the exact time Trump tweeted angrily about Pence’s refusal to aid his attempt to subvert the election.

The panel’s investigators noted that O’Brien tweeted from his official and personal accounts in support of Pence and against the violence that was occurring, even as Trump aides were struggling to convince Trump to express similar sentiments on Jan. 6.

O’Brien also described his efforts, along with other Trump cabinet members like Secretary of State Mike Pompeo and Ratcliffe to project calm and leadership, describing a photo the three men took shortly after the Capitol attack to “show the world that the, you know, watchmen were on the tower.”

Daniel Lippman contributed to this report.