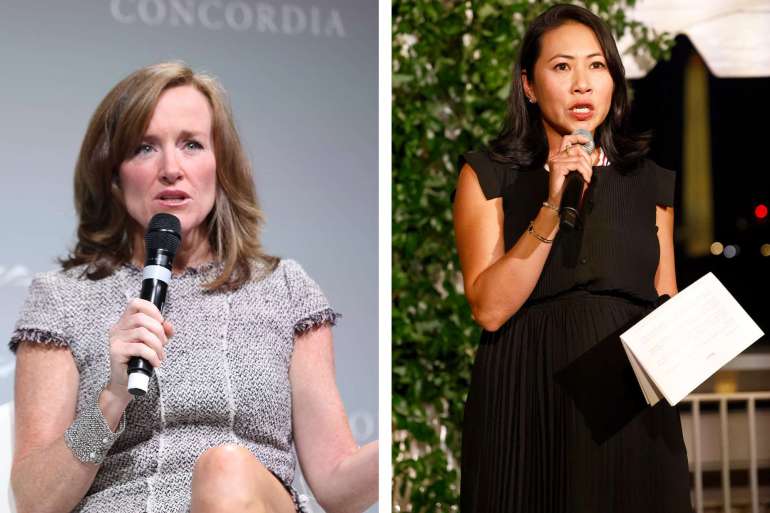 But when the duo sat down for an exit interview with POLITICO, it was clear they have few regrets about their reputations as thorns in the side of leadership. In fact, they take the label literally: Murphy, Rice and their close friend, Sen. Kyrsten Sinema (I-Ariz.), bought matching diamond-adorned thorn-shaped necklaces to celebrate their roles, along with a handful of other moderates, in delivering President Joe Biden’s infrastructure bill last fall.

“A diamond-studded thorn. There’s an analogy there,” Murphy said. “But we got the bill done. Sinema got it done on the Senate side, and we broke it free on the House side. … We believe in celebrating victories sometimes, just with jewelry.”

In a Capitol and a nation where bitter partisan division has made centrists like Murphy and Rice ever more rare and oft-targeted, their candor about their rebelliousness stands out — perhaps more so in contrast to the reticence of their friend Sinema. (Especially since the trio has a habit of shared mementos, buying what they call “class rings” or “we survived the insurrection” rings after a narrow escape from Sinema’s hideaway on Jan. 6, 2021.)

The conversation that follows — about their biggest frustrations with their own party, why they’ll never run for the House again and more — is lightly edited for clarity and consistency.

The two have been joined at the hip ever since Murphy’s first days in the House in 2016, when a friend of Rice’s, Rep. Scott Peters (D-Calif.), suggested they live together during a group dinner. Rice now calls him their “matchmaker,” and Peters was among the frequent guests at the rental they shared for the next five years. They nicknamed it the “Smokehouse” after Rice and Murphy burned food in their oven just as people were showing up for their housewarming party, filling the home with smoke.

Murphy: I remember, when we having dinner or something, and [Peters] — as if I wasn’t there — said, like, ‘Kathleen, she seems normal.’ [laughs] ‘You guys should probably live together.’ And I was like, ‘Well, thanks.’ I was living by myself, and it was so lonely in D.C. to go back to a random apartment. Kathleen, when you set her on a mission, like, get out of her way.

Then, like three days later, we signed a lease to a place. Apparently [Reps. Josh] Gottheimer [D-N.J.] and [Tom] Suozzi [D-N.Y.] were already looking at the place, and she was like, ‘We gotta beat him to it.’

Rice: I don’t even think we saw it.

Murphy and I were very deliberate about the activities we would do at our house … Always, it has to be bipartisan. Until Covid happened, then the Smokehouse kinda shut down. [When McCarthy came], his team would have to come and like sweep the place. We’d play Jenga, card games.

Murphy: We used to work out together — Solidcore. … I remember Kevin [McCarthy] was like, ‘Who thought it was a great idea to have cameras when we’re on our ass?’ [both laugh]. I was a freshman. I was like, ‘Any press is good press.’

Rice: We’ve been pretty protective of Sinema, you know. Ever since Covid, and these last two years being so crazy, she would only come to the Smokehouse.

Murphy: What I would say is: D.C., for as many people and meetings and things that you’ll do, it can be very isolating and lonely. Sometimes those relationships don’t feel real. The Smokehouse was always a great place for us to have real friendships. Setting aside political perspectives and actually seeing each other as people. Catch up about our family, complain about what happened at work that day.

Both Rice and Murphy have taken their share of heat for their plainspokenness in a capital where diplomatic spin can be the norm and women don’t always get celebrated for straight talk the way men do. Rice recalled one male lawmaker calling her “the troublemaker” for speaking up about an issue, and Murphy was open about the same treatment from her own gender. When asked to name the most outmoded tradition in Congress, then, they didn’t hold back.

Murphy: This is just the Democratic caucus, but the whole seniority thing. If you look at the Republican model, it works better because it allows for the committees to switch up for different priorities and perspectives and ideas. … I think it really stunts the Democratic party’s ability to generate new ideas and a new generation of leaders.

Rice: I think [Congress] could be a much more effective body as a whole if we did more things together, if we were actually here at the same time. House and Senate.

Murphy: Too many people in the House think that it’s enough to have just passed a bill through the House. And it’s like, no, if you want to change people’s lives, it has to become law. If you look at some of the big showdowns that we had, it was because the House wanted to pass something that was never going to become law.

And their honesty didn’t fade when asked about what it’s like to get tagged as a problem for Democratic leaders.

Murphy: The infrastructure that exists to ensure party unity is very powerful. It’s outside groups that have money to punish their own party members for stepping out of bounds, and you can look both at the Republican side and the Democratic side.

They have dehumanized us as lawmakers, and so it’s okay to hurt somebody if you don’t see them as a human being. I saw on the news yesterday, the head of the Capitol Police said there’s never been a more dangerous time to be an elected official. So then, people who have talent and the ability to pursue careers in other places, they’re going to decide not to do this. We’re going to be left with weird people or maniacally ambitious people running our country.

Or when the idea of another House bid came up…

Rice: Not me. Never running again.

Murphy: Nope. Not in the House again.

During the recently concluded 117th Congress, Murphy held a high-profile post on the Jan. 6 select panel, where one recent report suggested she had feuded with Rep. Liz Cheney (R-Wyo.). True to form after criticizing what she called the desire to foment “woman on woman violence,” the Floridian downplayed any tension.

Murphy: The January 6 select committee was the most important group project I have ever been assigned to. And anybody who’s worked in a group project knows that you have to come up with compromise language. You have nine people with very different personalities and ideas. And you just have to figure out how to make the product the best that it can be.

I have a lot of respect for Liz. And maybe it goes back to that sexism question. I don’t know why that became something that staff or other members felt like they needed to focus on, when those conversations happened between all members. It’s a giant group project, and conversations happen. I don’t know if people want to see us in a mud pit or something. Like, it’s just silly to me. I’m really proud of the product we came up with.

And when the duo was asked about what influenced their decisions to leave the House, Murphy talked about having to explain to her two young children “that mommy’s job opens her up to being hurt,” emphasizing that she wants to prioritize her kids. Rice took a more pointed view.

Rice: I have seen every iteration of power in my eight years. There’s been a Democratic president, Republican president, Democratic House, Republican House, Democratic Senate, Republican Senate. When people say to me, ‘Oh, are you leaving because you know you’re probably going to be in the minority?’ I say, ‘Actually, no. But ironically enough, the worst two years ever was when Democrats were in control of everything.’

That was this last Congress. We were acting — and the rhetoric out of Democrats — was like, ‘We have this mandate.’

Murphy: Five seats in the House is not a mandate [laughs].

Some of the House Democratic caucus’ advocates for muscular governing while the party maintained unified control of Washington are progressives who belong to what Rice and Murphy call the “Never Enough” caucus. Both clearly think favoring the left hurt Democrats politically in a midterm election where the party largely exceeded cellar-low expectations.

Murphy: Defund the Police. The Green New Deal. There were so many well-intentioned [pieces of] legislation with just terrible naming and impact on average Americans.

As crime is going up, your suburban housewife doesn’t want to defund the police, right? But I know that ‘defund the police’ to our caucus means something totally different. It means having wraparound services so that you’re not sending law enforcement officers into mental health situations. There could have been a bajillion different ways to express that.

Rice: I just want to give you New York as an example. This is a blue, blue state, and it’s the reason why we lost the majority. We lost four House seats. I said [to party leaders], ‘You guys, don’t understand, we’re gonna lose Long Island. And we’re gonna lose some other seats, further up.’ They said, ‘No, no, no, your seat was a Biden +13.’

[But] in a community like mine, when we had elections in November of 2021, every single Democrat on Long Island lost. Not because they weren’t popular and not because people didn’t like them. But they wanted to send a message to Washington.

Murphy: My other favorite thing is to have my progressive colleagues tell me, ‘No, no. I have polling that says this is popular in your district.’ You know what, the people of Florida 7th elected me. Let me tell you what they’re telling me. Your polling doesn’t mean anything.

Rice: I’m very excited to see what direction he takes the caucus in. I think it’s going to be very difficult for him, because we’re increasingly more diverse. Every election brings greater diversity, ideological diversity. It’s going to be hard. But I’m glad that the torch has finally been passed.

And despite all the daggers they’ve taken and dodged as women in politics, both Rice and Murphy said they would still encourage a daughter, niece or any other young woman to run for the House.

Rice: 1,000%. And it’s funny because I say to people, especially young women, ‘If someone ever asks you to run for office, just say yes. Don’t think about it.’ Because 17 years ago, if I had thought, ‘What does this entail?’ I probably wouldn’t have done it.

There are so many points, mostly financial barriers to women entering politics. [But] I would say absolutely, yes, 1,000%. Because this is the greatest honor of my life, honestly, to serve in this way.

Murphy: I would say yes, too. There are very few places where you can make the kind of difference in people’s lives that you can in the U.S. House of Representatives. I actually have particular pride in having passed that infrastructure bill, because the guy before me was the chair of [House] transportation. Everybody in my community, when I got elected, underestimated me. Well, guess what. Historic investments in infrastructure.

I hate to sound so petty, but when you’re underestimated as much as I think women can be, when you get your wins, you should just take your wins.