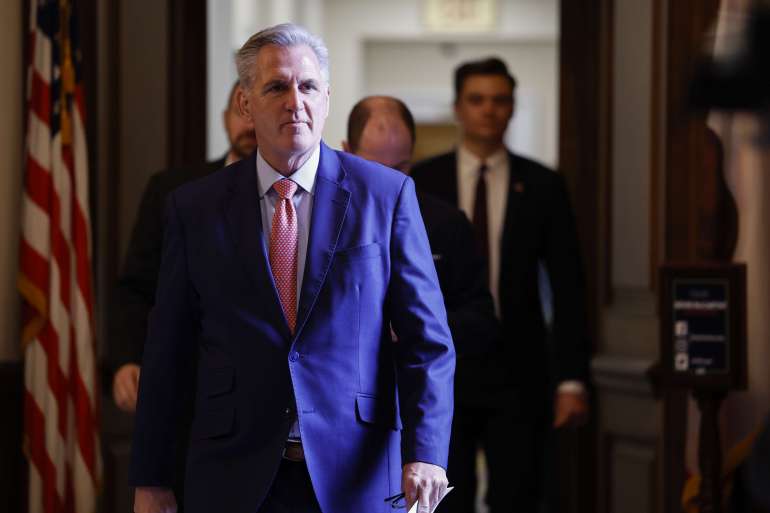 “The simple fact is that Congress is broken and needs to change,” McCarthy wrote in a letter to his members, citing party leaders’ increasingly centralized power that has “relegated members of both parties to the sidelines, with mammoth bills being drafted behind closed doors and rushed to the floor at the last minute for an up-or-down, take it or leave it vote.”

The 55 pages of proposed rules are highly procedural, yet critical to the inner workings of the House. They would, for instance, govern how party leaders bring bills to the floor and how to ensure transparency around what those bills include. But the biggest focus for Republicans lately has been the so-called motion to vacate — the same tool that conservatives effectively used to topple former Speaker John Boehner in 2015. And it could be a serious threat to McCarthy as his conference takes power this week with one of the slimmest margins in House history.

It wasn’t the only ominous sign for McCarthy on Sunday: A group of nine conservatives who haven’t said how they plan to vote on Jan. 3 released a missive stating they remained unsatisfied by McCarthy’s answers to their demands from last month.

“Despite some progress achieved, Mr. McCarthy’s statement comes almost impossibly late to address continued deficiencies ahead of the opening of the 118th Congress on January 3rd,” the group, led by Rep. Scott Perry (R-Pa.), wrote.

The group added that McCarthy’s response, which was delivered to them on Saturday, was “missing specific commitments with respect to virtually every component of our entreaties,” though they said some of the progress has been “helpful.”

Those noncommittal members, many of whom belong to the House Freedom Caucus, are in addition to several other prominent McCarthy skeptics in the GOP — underscoring the shakiness of the California Republican’s path to speaker on Tuesday.

Even so, McCarthy’s allies are not backing down, though they did make clear in their New Year’s Day huddle that they wanted more clarity on exactly how his compromises with the conservatives are translating into support. The speaker vote is just two days away, and opposition does not appear to be softening.

At one point during the call, Rep.-elect Mike Lawler (R-N.Y.) asked Rep. Matt Gaetz (R-Fla.) if he would support McCarthy if he agreed to lower the threshold to one. Gaetz replied by noting McCarthy wouldn’t agree to that, to which the California Republican replied that it is the conference that will oppose that threshold.

And McCarthy said he’d like to hear Gaetz’s answer, but Gaetz — one of his most fervent opponents — said he’d think about it. At one point he asked: is that an offer?

“Some of the rules changes are being made, some of us will live with them even though we think some of them may be unnecessary,” said one GOP lawmaker supportive of McCarthy, who requested anonymity to speak candidly of the private discussions.

Some of McCarthy’s allies also made clear they would not accept the conservative-led changes if they derailed the speaker vote. “Many of us said we’ll only agree to rules if we get 218 for Kevin,” said another House Republican, who is also a McCarthy supporter.

Other proposed changes would bring a return to Republican rules prior to the Democratic takeover in 2019. One focus is on controlling spending by restoring provisions on how House bills are scored and paid for. The GOP would reinstate so-called “Cut As You Go,” which requires all mandatory spending increases to be offset by a cut in spending.

Other proposals are new. Republicans will push ethics reforms, calling for the first members-focused ethics task force in 25 years and a new feature that would allow the House Ethics Committee to take complaints directly from the public. The package would also create a new select subcommittee within the Judiciary Committee called the “Weaponization of Federal Government,” to focus on what the GOP has called the White House’s “assault on civil liberties” — another conservative ask.

Most of the proposed rules are not surprising. Republicans plan to nix Democratic rules allowing for proxy voting, remote committee work, and magnetometers outside of the House chamber. Congressional staff unions, which had just begun forming this fall, would be banned. The GOP would form a new select committee on China that would work on protecting “American competitiveness” and defending human rights.

The Democrat-led committee to investigate the Jan. 6 Capitol riots will be disbanded, requiring a “quick transfer of funds” back to the House Administration Committee.