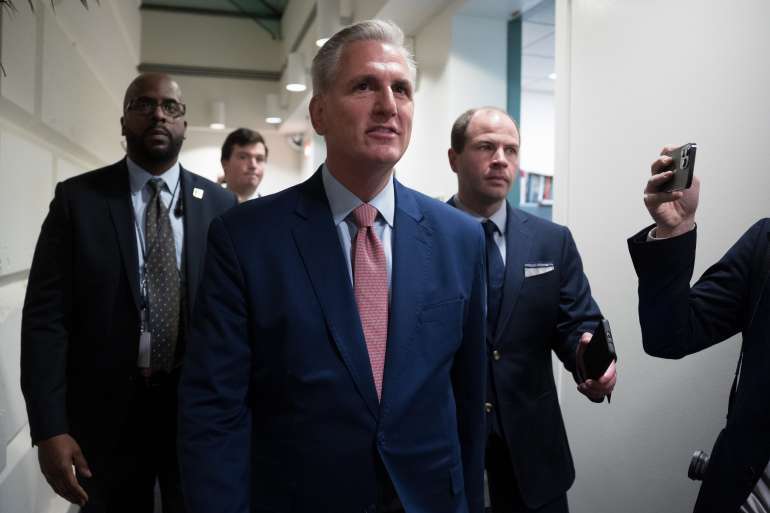 It wasn’t just the California Republican calling out the conservative hard-liners. Many of McCarthy’s frustrated supporters, too, unloaded on the band of detractors. At one point, Rep. Mike Rogers (R-Ala.), the top Republican on the House Armed Services Committee, pushed the idea that any Republican who opposes McCarthy should be stripped of committee assignments.

One of McCarthy’s chief antagonists, Rep. Chip Roy (R-Texas), spoke up to defend his position — and lashed out against Rogers’ remarks about keeping fellow Republicans off committees, shouting profanities at his colleague. Rogers said after the meeting that his warning that the Steering Committee will block McCarthy opponents from getting committee assignments wasn’t just a threat: “I promised it.”

And McCarthy shot back at Roy’s defense of his opposition: “You’re not voting against me, it’s against the conference and the country.”

Roy wasn’t the only Republican vowing to vote against McCarthy to speak up. Reps. Scott Perry (R-Pa.) and Ralph Norman (R-S.C.) both reiterated their stances to the conference. The GOP leader responded to Perry: “What’s left? What do you want?”

Other anti-McCarthy members, including Perry and Reps. Lauren Boebert (R-Colo.) and Matt Gaetz (R-Fla.), publicly railed against McCarthy after the closed-door meeting, arguing that his allies were resorting to political threats instead of making a deal. Boebert had just announced her public opposition Tuesday morning, along with Rep. Dan Bishop (R-N.C.).

“This [meeting] was about a beat down and a simulated unity in the room that really doesn’t exist,” Perry said.

“Here we are being sworn at instead of sworn in,” Boebert added.

McCarthy appeared unbowed Tuesday morning after what he described as an “intense conference,” saying “I’m not going anywhere.”

He added that Monday night, conservatives told him “the only way to get 218 votes was if I provided certain members with certain positions, certain gavels … and they even came to the position where Matt Gaetz said: ‘I don’t care if we go to plurality and we elect [incoming House Democratic leader] Hakeem Jeffries.’”

Even before the explosive meeting, early signs Tuesday didn’t point in McCarthy’s favor. Perry offered blistering criticism of McCarthy just before the meeting, saying conservatives had asked for several concessions like commitments on committee seats that, in turn, would get him to 218 votes, but that the California Republican declined.

“Kevin McCarthy had an opportunity to be Speaker of the House. He rejected it,” said Perry, the chair of the conservative House Freedom Caucus.

McCarthy has worked fervently to lock down support, releasing a long list of concessions he’s prepared to make on rules changes, including making it easier to depose a speaker. In a significant win for conservatives, McCarthy set the number of Republican backers needed to force a vote on deposing the speaker at five, to the dismay of some rank-and-file members. It’s an about-face from just weeks ago, when the conference set the threshold to prompt such a vote, known as the motion to vacate, at a majority of its members. And some conservatives argue that’s not good enough — they want one member to be able to force such a motion.

Democratic leaders, meanwhile, aren’t looking to make it any easier on McCarthy. They’ve told their members not to miss any ballots, which would have lowered the number of votes the GOP leader needed, and to vote for the incoming minority leader, Rep. Hakeem Jeffries (D-N.Y.).

Some Republicans say McCarthy should make a deal to persuade about a dozen Democrats to leave the floor after several ballots, allowing him to skate through despite a handful of opponents among his own conference. Others, like Bacon, have floated that if conservatives block McCarthy, they could work with a band of centrist Democrats to elect a more moderate Republican instead.

But after weeks of behind-the-scenes drama, Republicans say they’re ready to keep fighting on the floor.