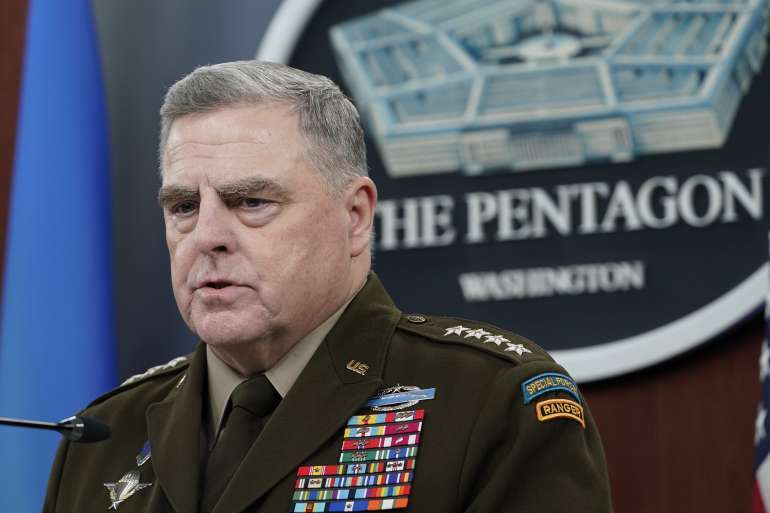 The revelation was one of many that Milley made during a Nov. 17, 2021, interview with committee members.

The 300-page transcript of the interview released this week is chock-full of wild anecdotes — not just from the day of the Capitol assault, but from the two years he served as then-President Donald Trump’s top military adviser.

From the very start, Milley makes clear that he is appalled by the events of that day. The general spoke at length about the oath he took as an officer and said he believes the insurrection was no less than an assault on the Constitution.

“The events of January 6th, in my personal opinion, were a horrific day, a tragic day in the history of America,” Milley said, according to the transcript. “So what I saw unfold on the 6th was disturbing, to say the least.”

The role of the committee is “critical” to preventing such an event from ever happening again, Milley said.

Many aspects of the assault on the Capitol and the days leading up to it have already been reported in news articles and books. Yet the transcript provides fresh insights for the historical record from a top official who was there for those key events. Here are some takeaways:

Leading up to Jan. 6, Milley and other top national security officials worried that America’s adversaries would try to exploit the domestic instability across the country.

The general noted that he had multiple conversations on this topic with Secretary of State Mike Pompeo and Vice President Mike Pence’s national security adviser, retired Lt. Gen. Keith Kellogg.

Milley was “constantly” trying to reassure allies during the time period from the election to Jan. 6, he said. In addition to the widely-known phone calls to a top Chinese general, he also made “50 or 60” calls to other counterparts, including in France, Qatar, Japan, Russia and others.

The aim was to “calm waters, to make sure that people understood that … this is a stable government, we’re not going to do something crazy and all that. That took a degree of effort,” he said.

During an interagency rehearsal of the vote to certify the election in the days leading up to Jan. 6, then-Deputy Defense Secretary David Norquist predicted that the greatest threat that day would be “a direct assault on the Capitol,” Milley said.

“I only remember it in hindsight because he was almost like clairvoyant,” Milley said. “He nailed it. He pegged that one. Incredible.”

The exercise was conducted at Milley’s insistence, and involved laying out the entire city on the gym of Conmy Hall, in Fort Myer, Virginia. The Secret Service, which officials tapped to be the lead federal agency for the day, videotaped the rehearsal.

“Both are potentially legitimate views. But one guy who’s hanging out in the White House, he says that during one of these calls,” Milley said of O’Brien. “Was that the view of the President?”

On Jan. 3, the national security team assembled to brief the president about Iran increasing the number of centrifuges it can use to enrich uranium. At the very end of the meeting, Milley remembers, Trump turned to acting Defense Secretary Chris Miller and asked him if he was “set” for Jan. 6.

“You’re set for the 6th and all that and you got a plan and, you know, protect my people and all that. Right?” Milley said. “And I’m silent. I’m just listening and I’m like, hmm.”

This struck Milley as “odd,” he said, because it was so out of place at the meeting.

Milley admits to mouthing off at Kash Patel, a Trump loyalist who became chief of staff to the acting defense secretary at the end of the administration. At the time, a number of media reports emerged that Patel was about to be tapped for a top position, including potentially replacing Gina Haspel as CIA director.

Milley recalls mocking the chief of staff in front of a number of top DoD officials, including the Army secretary and superintendent of West Point, at the Army-Navy game in December of 2020.

“I said in perhaps a voice that was louder than maybe I should have, I said to Kash Patel, I said: So, Kash, which one are you going to get, CIA or FBI?,” Milley told investigators. “And Patel’s face, you know, he looks down and he comes back and says: Chairman, Chairman.”

Mark Meadows, the White House chief of staff, told Milley to back down, noting “Hey, it’s none of your business. This is personnel.” Milley backed off, he said.

Haspel later threatened to resign if the administration made Patel her deputy, and the idea was dropped.

Days after the election, Trump set off alarm bells by firing a number of top Pentagon officials, starting with Defense Secretary Mark Esper, and installing loyalists on a temporary basis in the most critical national security jobs.

In quick succession on Nov. 10, a day after Esper’s firing, top officials overseeing policy, intelligence and the defense secretary’s staff all resigned, replaced by political operatives who had trafficked in “deep state” conspiracy theories, POLITICO reported at the time.

“There was a general feeling of unease amongst [inaudible] in the Pentagon at the time. And there was a feeling of unsteadiness in the building for a period of time because of all these moves,” Milley said.

And the feeling wasn’t limited to inside the Pentagon. Allies noticed the changes with concern, too.

The biggest concern was that most of the top national security positions were filled by people in an acting capacity who were not Senate-confirmed, he stressed.

“That should cause people pause right off the bat,” Milley said. “It gets noticed by overseas, folks overseas, et cetera.”

There were “indications” throughout the two years he served as joint chiefs chair under Trump that the president was contemplating issuing unlawful orders to the military, Milley said. While not specific to the election or the Insurrection Act, there were “other discussions” that caused him to worry, particularly about a crisis overseas.

“I was concerned that there could have been a serious overseas crisis at a moment in time in combination with serious domestic violence that could become the predicate for something that probably was extrajudicial or unconstitutional,” Milley said.

No call from Trump

Milley made and received dozens of phone calls on Jan. 6, including with House Speaker Nancy Pelosi and Vice President Mike Pence, but never got one from his boss. He stopped short of saying he was frustrated with the president’s silence, he said “I noted it.”

Milley had to dissuade officials in the Trump administration who discussed recalling and court-martialing retired military officers who wrote editorials that were critical of the president, he said. His concern was that such a move would further politicize the military.

“I advised them not to do that,” Milley told investigators. “And I said: ‘please give me a chance to calm the waters a little bit.”