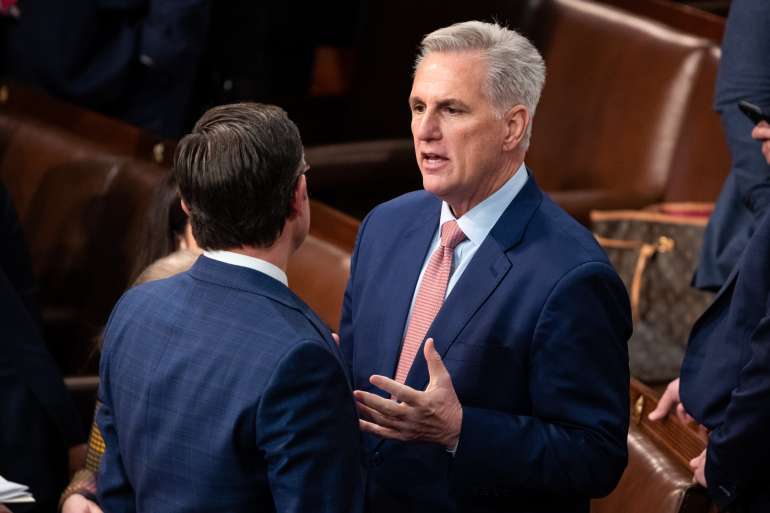 These have been informed by the work of Matt Glassman, a senior fellow at the Government Affairs Institute at Georgetown University; the Congressional Research Service and the House historian.

Do they have to vote Wednesday?

Most simplistically, no, they do not. While the House is set to reconvene at noon, members-elect — technically speaking, in fact, all members are “members-elect” until a speaker is chosen — could adjourn again before taking another speaker vote.

However, with the current impasse, the House GOP’s options are limited. They can either vote for the speaker or, like Tuesday, a lawmaker could move to adjourn if Republicans want more time to negotiate in private. Such a motion requires a majority to pass, so Democrats could be a factor in such a scenario. Lawmakers would also have to set a specific time to reconvene on the floor.

Are there relevant historical parallels to this situation?

Every election and circumstance is different, but 1923 is probably the most analogous. In that instance, a group of House Republicans sought progressive procedural concessions from the sitting speaker, Frederick Gillett.

How the century-old floor fight played out could be instructive for McCarthy’s battle. The chamber voted four times on the first day and then four times on the second day without electing anyone. A deal was then struck, and the chamber elected Gillett speaker on the first ballot of day three. That was the last speaker election that required multiple ballots to decide the victor.

What was the longest speaker fight in history?

It’ll take McCarthy a while to even get close to the longest fight in history, which occurred in 1855. That fight, which took place in the years leading up to the Civil War, initially attracted more than 20 candidates and took two months to resolve. Nathaniel Banks of Massachusetts eventually prevailed in the contest, which went on for an astounding 133 ballots.

Was that a one-time thing?

Actually, no. Fights over the speakership, particularly in the 19th century, often took many ballots to resolve. It took more than 10 ballots each for the elections of Speakers John Taylor (22 ballots); Philip Barbour (12 ballots); John Bell (10 ballots); Robert Hunter (11 ballots); Howell Cobb (63 ballots); William Pennington (44 ballots) and Banks, among others.

Is there any way to elect a speaker without a majority?

In short, yes. The chamber has extremely wide latitude in determining how it wants to elect the speaker, as long as a majority of members-elect approves such a move.

The House opted in both 1849 and 1855 to adopt the use of plurality voting to decide the speakership. They structured the election to first allow for three standard votes. Then, if no one succeeded in attaining a majority, a fourth one to be decisive at a plurality threshold.

Given the divided House and the need for a majority to support it, the likelihood of this seems pretty small. But the option does exist.

Do they have to keep calling names one-by-one?

In a similar vein, again, the House can structure its vote how it pleases with majority buy-in. Prior Congresses have opted for election by secret ballot (prior to 1839) or resolution.

Lawmakers opted to use resolutions to elect Speakers William Bankhead (1936) and Sam Rayburn (1940) upon the deaths of prior speakers in the middle of the term. Both of those resolutions passed by voice vote.

What’s the shortest tenure of a speaker?

One day, but it’s a bit of a special case. Speaker Theodore Pomeroy of New York held the gavel for a single day after his predecessor, Schuyler Colfax, resigned to become vice president. Pomeroy helped close out the final day of the 40th Congress and then retired.

Should he eventually emerge with the gavel, McCarthy won’t face those circumstances but will continue to confront a threat from his right flank, which has insisted on a procedural tool that would allow any one member to force a vote to oust the sitting speaker.