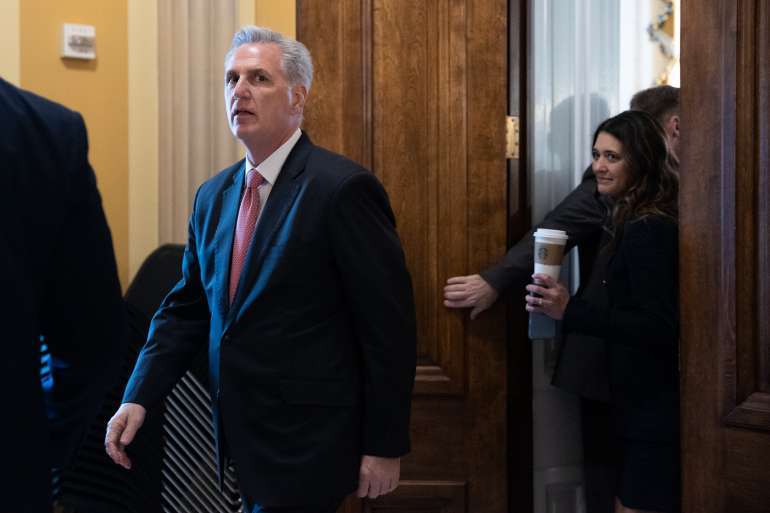 McCarthy signaled ahead of the seventh ballot that he expected the same outcome, as he continues to work towards a finalized agreement with his detractors.

“We’re just gonna keep working until we solve it,” McCarthy told reporters as he headed to the vote on Thursday. “We’re going to go in here; we’re going to have a vote. Nothing is going to change. But what we’re doing is we’re having really good progress.”

The GOP leader’s team laid out a potential deal to his dissenters on Wednesday night that would give into nearly every demand that conservative skeptics insisted on.

The offer, confirmed by two Republicans familiar with it, includes a vote on term limits for members, more seats for Freedom Caucus members on the powerful House Rules Committee, and allowing a single member to force a vote on ousting the speaker. That last item is a particularly steep climbdown for McCarthy — essentially guaranteeing that if he does land the gavel, it’s never fully safe.

And even that olive branch to conservatives may not be enough to land McCarthy the speakership. Allies of the GOP leader continued to meet with holdouts on Thursday morning, as they hunt for an escape hatch from the days of high-profile drama that has paralyzed their new majority.

Rep. Brian Fitzpatrick (R-Pa.), a McCarthy ally, said as he exited those meetings that the offer contained “clarifications” rather than “concessions” — and acknowledged that none of the dissenters have yet explicitly committed to vote for the Californian as a result of them.

Additionally, the conservative Club for Growth has agreed to back McCarthy’s speaker bid pending the deal with the hardliners. That came after the McCarthy-aligned Congressional Leadership Fund reached an agreement with the group to stay out of open House primaries for safe Republican seats.

At least one McCarthy ally downplayed the significance of allowing a single member to force a vote on a so-called “motion to vacate the chair,” which would dislodge the speaker — despite his allies previously describing that concession as a red line.

“The difference between five and one? Yeah, fine,” said Rep. Warren Davidson (R-Ohio), a Freedom Caucus member who nominated McCarthy on the floor Wednesday.

But other senior Republicans and moderates, already feeling heartburn about the extent of McCarthy’s compromise offers, are anxiously awaiting details about the extent of the changes being agreed to. Those who have long detested the antics of the conservative Freedom Caucus, were starting to wonder if their leader might be getting picked clean of any authority as multiple votes chipped away at his standing.

It was a sharp turnabout from Tuesday morning, when one Republican recalled McCarthy beating his chest in conservatives’ direction during a tense closed-door conference meeting, saying: “You vote against me? You get less. I take things away.”

“At some point, you have to push back and say enough is enough,” one frustrated House Republican said on condition of anonymity late Wednesday night, shortly before the latest concession offer emerged. “But especially when you have members [in opposition] that had [McCarthy] hosting fundraisers and taking photos with them out in their districts.”

This Republican declined to commit one way or another on voting for a slimmed-down motion to vacate if McCarthy lobbied for one, and described conservatives’ push for “guaranteed chairmanships and stacking the Rules Committee” as a bridge too far.

Rules Committee seats would help McCarthy skeptics place their imprint on bills before they come to the floor. Conservatives are also seeking the GOP leader’s commitments for votes on specific pieces of legislation, including standalone consideration of each of the 12 yearly appropriations bills.

On top of that, McCarthy’s dissenters on the right also won a concession to carve out any earmarks included in those packages for separate votes, though it’s unclear whether they’d be voted on as one package or separately.

As the horse trading continued, it remains unclear how many more speaker ballots might be cast on Thursday. Some members have floated postponing votes until next week — though others in the party have pushed back on that idea.

One McCarthy ally, speaking on condition of anonymity, cautioned that the situation could “get worse before it gets better.” There’s an expectation that McCarthy could lose a handful of votes from exasperated members if balloting continues on Thursday.

As he left the Capitol Wednesday night, Rep. Ralph Norman (R-S.C.) told reporters he hadn’t changed his position on opposing McCarthy. Norman is a major backer of the term-limits proposal included in the concession offer floated later that night.

McCarthy allies are also worried about freshman Rep. Eli Crane (Ariz.), who has been a hard “no.”

As Thursday dawned, the thinking in McCarthy’s camp was that if they can winnow down his opposition from 20 to a half-dozen or so, the pressure on the remaining holdouts would be so great that enough would cave. McCarthy has also floated that if he can flip enough “no” votes into his column he could convince others to vote “present,” lowering the threshold he would need to become speaker.

Yet time is running out as some McCarthy backers exasperated by the stalemate eye an exit strategy. Rep. Pete Sessions (R-Texas), a former Rules Committee chair long considered an ally of GOP leadership, insisted on CNN last night that members should start discussing other potential speaker candidates, such as Rep. Steve Scalise (R-La.), the expected incoming majority leader.

“I want to see what those concessions are, line by line. And maybe name by name,” said Rep. Steve Womack (R-Ark.)

McCarthy’s camp also expects that he may eventually have to endorse conservatives for committee gavels, such as Rep. Andy Harris (Md.), who’s pushing to lead the Health and Human Services subcommittee on Appropriations, or Rep. Mark Green (R-Tenn.), who’s gunning to lead the Committee on Homeland Security. (Those decisions are subject to the approval of the GOP steering committee, though McCarthy’s influence is significant.)

If the negotiating gets that far, it’s bound to upset many House Republicans who have supported McCarthy all along. Centrists or even mainstream conservatives are likely to argue that McCarthy is rewarding bad behavior.

Rep. Don Bacon (R-Neb.), for one, called dropping the motion to vacate down to one member a “terrible decision,” but left the door open if it got McCarthy the speaker’s gavel.

“I don’t like it. I don’t want to vote for it. But I’m willing to discuss it,” said Bacon, while warning that setting it at one member could result in the step being taken “every week.”