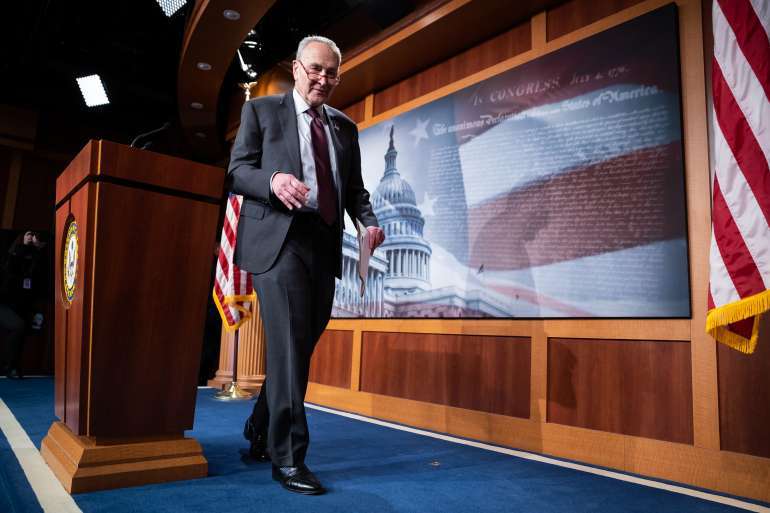 And that’s a harsh reality for the upper chamber’s Democrats. They can unilaterally approve President Joe Biden’s lifetime judicial nominees — confirming them even more quickly than last term, thanks to a clear 51-seat majority.

But they won’t be satisfied with simply turning the Senate floor into a nomination factory after Biden’s unexpectedly productive first two years in office. It’s just not in their DNA.

“I want to see some action,” said Minnesota Sen. Amy Klobuchar, a member of Democratic leadership who chairs the Senate Rules Committee.

An agenda even approaching that size seems unattainable in the coming months as House Republicans flail their way through a stalemated speaker battle. Yet Senate Majority Leader Chuck Schumer is still hopeful, regardless of who ends up leading the House, that lawmakers can “keep the streak going moving forward.”

Rather than sweeping changes to election law, D.C. statehood or the gargantuan plan known as “Build Back Better,” Democrats are discussing modest but still challenging issues to tackle this Congress. Klobuchar mentioned childcare, housing, Big Tech and antitrust as possibilities as well as “some type of immigration” bill.

“I know it seems impossible in the House, but it’s really necessary,” she said.

All of those would have to clear the 60-vote hurdle of the Senate’s legislative filibuster before House Republicans would even think of considering them. And some Democrats argue that the only way to motivate the House to think in a more bipartisan fashion is to lead the way.

The last time Democrats found themselves in the situation they’re confronting now — holding the presidency and Senate majority with a GOP House — was in 2012 after President Barack Obama’s reelection. That Senate took significant and risky steps toward bipartisanship, not all of them successful: An attempt at new gun background checks fell short, while a bipartisan Gang of Eight senators, including Schumer, helped pass a sweeping immigration reform bill.

But the House refused to touch immigration. Eventually, the government shut down as House Republicans and Senate conservatives tried to defund Obamacare. Then, Democrats lost the Senate in the brutal 2014 election.

With that lesson learned, Democrats are not aiming as high this time around. And even if Kevin McCarthy eventually manages to seize the speakership in the coming days, it’s hard to imagine a rush of bipartisanship in the first half of this year.

Centrist Sen. Joe Manchin (D-W.Va.) said things will look more sunny “if Kevin holds his ground and … tries to work with some of the people who are more moderate. And don’t cater to people that hold you hostage. In America we always say we don’t pay for hostages.”

“I’ve talked to Kevin before — I’d like to think that” he’ll work with us, Manchin said. “We’ll just see how he comes out of this.”

There’s also the question of whether Senate Republicans will even allow things to get that far. With just 51 seats, Democrats will need at least nine GOP votes in the Senate to pass anything. That means Senate Minority Leader Mitch McConnell (R-Ky.) who collaborated with Democrats to a surprising degree that past two years, maintains effective veto power over any legislation moving through the chamber.

Democratic leaders will have to calibrate their ambitions to what is doable, and possibly once again allow bipartisan gangs to cut deals. Different factions of Republicans have shown interest in taking on Big Tech, marijuana banking and lowering drug prices, particularly insulin.

And GOP leaders said Biden may have to get involved.

“I don’t think anybody for two years will want to just do judges. I think you want to see if there are some legislative accomplishments we can put up,” said Senate Minority Whip John Thune (R-S.D.). “But clearly you’re going to have strong differences of opinion in divided government. So that’s going to require some presidential leadership.”

Then there are the must-pass spending bills, the debt ceiling and an expiring farm bill to confront. In particular, Republicans want to avoid another big end-of-year government funding deal crafted behind closed doors, after December’s $1.7 trillion bipartisan bill.

That will require both House Republicans and Senate Democrats to actually prioritize putting appropriations bills on the floor.

“That’s where Republicans in the House will make a difference once they get leadership established,” said Sen. Joni Ernst (R-Iowa).

Of course, that assumes the fractious House can cobble together 218 votes even for spending bills after this week’s ugly speaker clashes. But a handful of optimistic Democratic senators see the House’s current struggle as a potentially cathartic one.

Brown said he hoped this week’s disarray “will free up enough Republicans to realize that if they want to get anything done, they have to work across party lines with us.”

“I don’t know that House Republicans want to go back and say: ‘Oh yeah, we did a lot of investigations,’” he added.