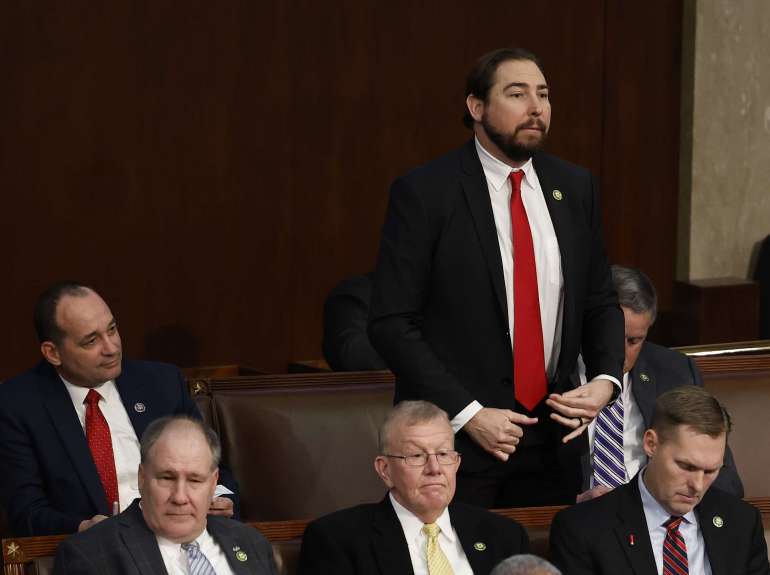 But Crane’s political seasoning comes more from besting a crowded GOP field in an August primary than from legislative tradition. Born in Tucson, Crane served 13 years in the military, including three deployments to Afghanistan as a Navy SEAL. He rose to prominence as a contestant on the popular show “Shark Tank,” where he and his wife won backing from investor Mark Cuban for their company, Bottle Breacher. The premise: making bottle openers from bullets.

Redistricting paved his way to Congress. Crane won a newly redrawn district that encompasses a massive swath of the eastern portion of Arizona. He ousted incumbent Democratic Rep. Tom O’Halleran in a district that swung from one President Joe Biden carried by 2 points to one that voted for then-President Donald Trump by 8 points, largely thanks to the addition of the rural Prescott Valley to the seat by Arizona’s independent map-drawers.

But first, Crane had to win a Republican primary with a hard-right tinge. The field included Ron Watkins, the man suspected to be behind the far-right QAnon conspiracy theory.

The second-place finisher in the primary, state Rep. Walt Blackman, praised a far-right extremist group during the campaign. “The Proud Boys came to one of my events and that was one of the proudest moments of my life,” Blackman said. (He later condemned the group.)

Yet some Republicans were wary of Crane too, in part because he falsely claimed that the 2020 election was stolen and urged his state legislature to “decertify” the election results — a prominent ask on the right that has no basis in law.

Crane is one of two new GOP freshmen in the Arizona delegation. The other, Rep.-elect Juan Ciscomani, made a speech to nominate McCarthy for speaker. He represents a Latino-heavy swing district based in Tucson.

Initially, Crane wasn’t the only Republican freshman opposing McCarthy for speaker. Reps.-elect Andy Ogles (R-Tenn.), Anna Paulina Luna (R-Fla.), Keith Self (R-Texas) and Josh Brecheen (R-Okla.) all stood against the GOP leader in repeated votes — but they switched to back McCarthy on Friday evening. Crane remained the lone holdout from his class.

“He’s doing this for what he thinks is the right reason,” said fellow freshman Derrick Van Orden (R-Wis.), a former Navy SEAL who said he’s known Crane for ten years. “There’s a couple of people in this conference that are not doing that.”

And, he added, “Kevin McCarthy, who’s going to be the next speaker, has been crystal clear with everybody here that there is no retribution.”