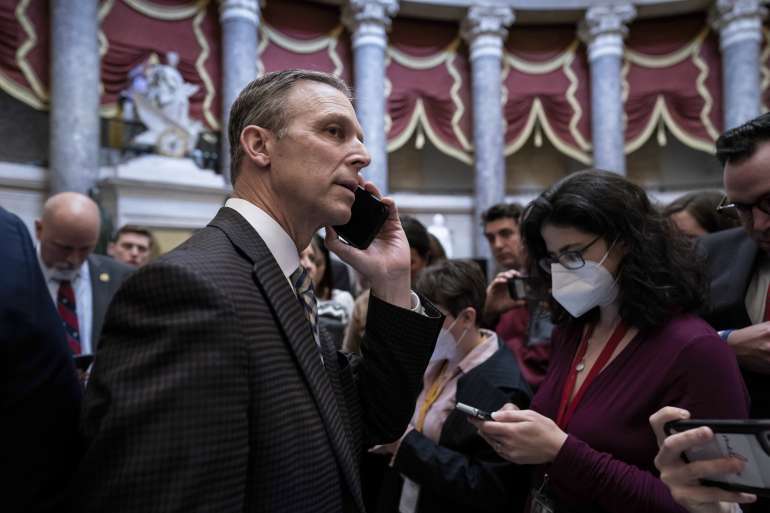 Rep. Scott Perry and other members of the conservative Freedom Caucus talk to reporters in Statuary Hall about their opposition to voting for Rep. Kevin McCarthy to be speaker of the House, at the Capitol in Washington, Friday, Jan. 6, 2023. | J. Scott Applewhite/AP Photo

“Nancy Pelosi ran Congress like a prison camp,” Rep. Scott Perry said Sunday in saying why he thinks Congress will be better now with Kevin McCarthy as speaker of the House.

Speaking on ABC’s “This Week,” the head of the House Freedom Caucus made the statement about the former House speaker in explaining why he had switched his vote to backing McCarthy after repeatedly rejecting him. McCarthy was elected speaker late Friday after overcoming opposition from Perry (R-Pa.) and other Republicans that had persisted over several days.

“Let me start with this,” Perry told host George Stephanopoulos on Sunday, “Frederick Douglass, who knew something about power, said power concedes nothing without a demand, never has and never will. This is never about Kevin McCarthy; this is about power for the American people and, with all due respect, Nancy Pelosi ran Congress like a prison camp with no accountability.”