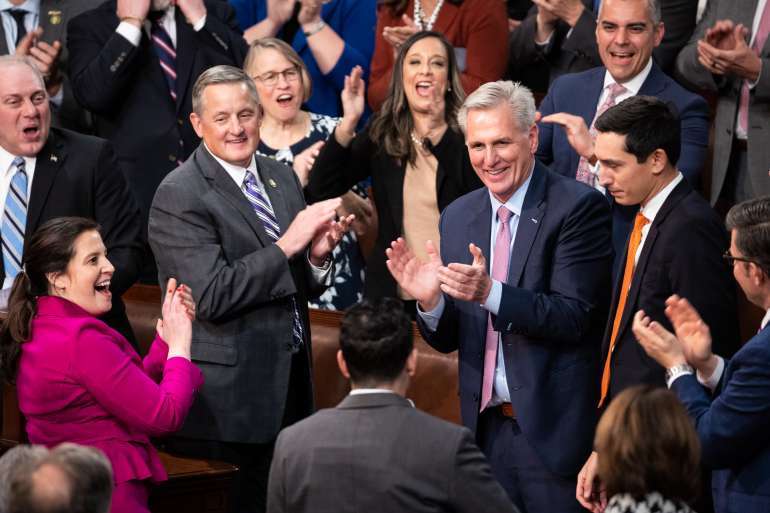 Jordan compared the extra votes before Rep. Kevin McCarthy (R-Calif.) was elected early Saturday to extra innings or overtime in sports, adding to host Shannon Bream: “Whether it’s one vote or 15 votes, Kevin McCarthy is still speaker of the House.”

Jordan was one of 200 Republicans who backed now-Speaker McCarthy throughout the negotiations and repeated votes, though his own name was briefly thrown in the mix for the position during the week. On Sunday, however, even Republicans who had repeatedly opposed McCarthy’s rise to the top leadership position said the discord was healthy for the party.

“A little temporary conflict is necessary in this town,” Rep. Chip Roy (R-Texas) said on CNN’s “State of the Union.” He said he hoped Republicans’ disagreements would be a step toward making Congress less “dysfunctional” for the American people.

One of the concessions McCarthy agreed to was allowing only one member to push a “motion to vacate,” or a vote on whether to oust him as speaker. Rep. James Comer (R-Ky.) said on NBC’s “Meet the Press” that while he hoped his colleagues would give McCarthy a chance, he was not convinced his party would go the entire two-year term without such a showdown.

“I’m not going to say there won’t be one person who tries to abuse that motion,” Comer said. McCarthy previously said he was “1,000 percent” confident he’d be speaker for a full two years, The Hill reported.

Roy, who was one of the first anti-McCarthy holdouts to flip after days of negotiations, also addressed the altercation on the House floor Friday night, in which Rep. Mike Rogers (R-Ala.), lunged at Rep. Matt Gaetz (R-Fla.) after a 14th attempt to elect McCarthy speaker had come up just short.

With debt ceiling negotiations on the horizon, it’s a good thing to get everything on the table now, Roy said. He added, referring to Rogers: “When you push back on the swamp, the swamp is going to push right back. We saw that on display. That’s OK.”

Rep. Dan Crenshaw (R-Texas), who earlier in the week referred to the anti-McCarthy holdouts as “terrorists,” said on CNN on Sunday that he ultimately mostly agreed that the negotiations helped build trust with the American people, and that it was good to air some grievances early on.

He also apologized to his colleagues who may have been offended by his earlier comparison to terrorists, though he defended it as “a turn of phrase.” Crenshaw added: “It’s important to note the reason that the 200 were so upset was because we felt we’d already come to the agreement that we have now.”

Rep. Andy Barr (R-Ky.) said the difficult negotiations “will make us a more effective majority.” McCarthy proved his leadership skills in pulling together the votes, and the GOP will be stronger for it, he said Sunday on ABC’s “This Week.”

“Don’t believe the happy talk that this was a healthy display of deliberative democracy. This was a power play,” the editorial board wrote.

And some sharp divisions within the GOP remained on Sunday.

“Matt Gaetz is a fraud,” Rep. Nancy Mace (R-N.C.) said on CBS’ “Face the Nation.” “Every time he voted against Kevin McCarthy last week, he sent out a fundraising email. What you saw last week was a constitutional process diminished by those kinds of political actions.”

Gaetz sent an email Sunday morning accusing McCarthy of being a “squatter” in the speaker’s office, more than a day after McCarthy won the position.

Jordan on Fox also said he expected the House to pass a rules package on Monday that would allow the House to move forward with other business.

At least one Republican in the party’s slim majority, Rep. Tony Gonzalez (R-Texas), confirmed Sunday on NBC’s “Meet the Press” that he planned to vote against it; however, he wouldn’t encourage other members to do the same, he said.

Mace said she was “on the fence” about the package Sunday, citing the possibility of secret deals between McCarthy and some of the conservative holdouts.

For her part, Mace echoed the idea that it was an untidy and frustrating week for American democracy.

“Sometimes democracy is messy — looked kind of like an unnecessary and prolonged food fight last week, and I agreed with many Americans who thought that,” she said.