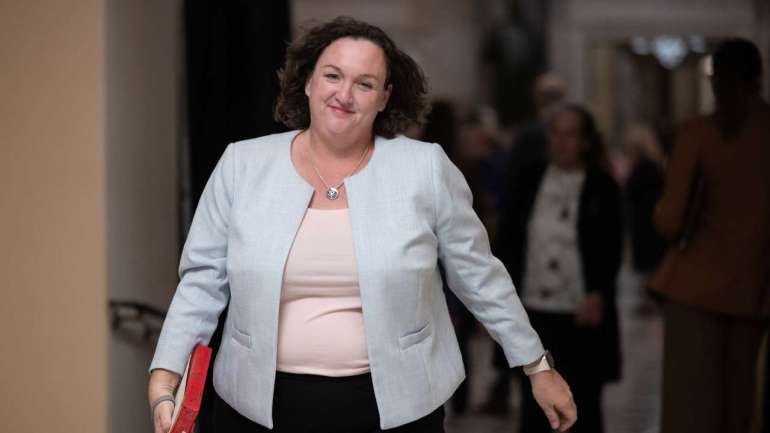 Feinstein said in a statement Tuesday following Porter’s announcement that “everyone is of course welcome to throw their hat in the ring,” and that she’ll lay out her plans for 2024 “at the appropriate time.”

California is currently experiencing devastating flooding that has forced thousands of people to flee their homes and killed at least 14 people since late December. “Right now I’m focused on ensuring California has all the resources it needs to cope with the devastating storms slamming the state and leaving more than a dozen dead,” Feinstein said in the statement.

Spokespeople for Lee and Schiff told POLITICO on Tuesday that Porter’s announcement did not change their timeline for launching their own campaigns. Schiff has previously said he would consider running if Feinstein did not run for another term, and he has already spoken to Feinstein about a potential bid, according to a person close to him.

A person close to Schiff also told POLITICO they were “perplexed” by Porter’s decision to announce her candidacy on Tuesday as California faces a relentless string of storms.

Rep. Ro Khanna (D-Calif.), another contender for Feinstein’s seat in 2024, declined on Tuesday to comment on Porter’s announcement but told POLITICO he wouldn’t make a decision on running “for a few months.”

“I’m just so focused on the flooding in my district and on the storms this week, so I’m focused on that,” Khanna said. “We just got done with an election. I’m not making any decisions for a few months.”

Porter, a three-term congresswoman, is well positioned to run a powerful Senate campaign. The progressive Democrat is a prolific fundraiser, with $7.7 million on hand as of the end of 2022 and $25 million raised in the last cycle.

But even with Porter’s impressive fundraising and ability to appeal to swing voters, the race is expected to be highly competitive — especially given California’s primary system, which could pit two Democrats against each other in the 2024 general election.

Porter’s announcement quickly rippled through California’s broader campaign landscape. Former Assemblymember Scott Baugh, a Republican, said he would seek the seat in 2024 after unsuccessfully challenging Porter in 2022. The lack of an incumbent could boost Republican prospects to flip the battleground Orange County seat.

Nicholas Wu and Jeremy B. White contributed to this report.