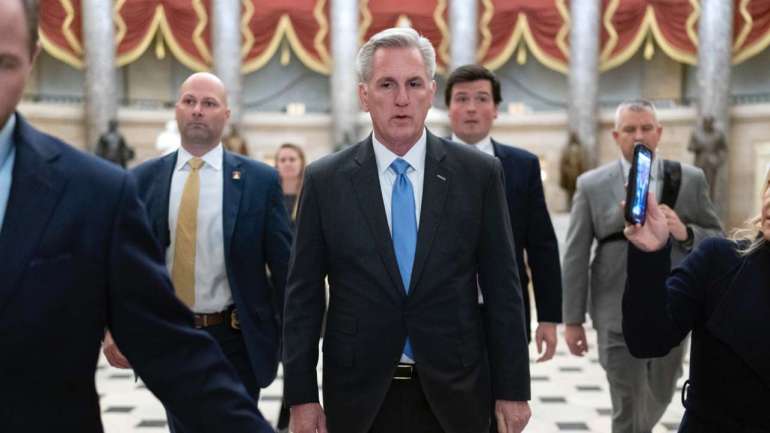 Their victories only grew as McCarthy pushed toward his 15th-ballot speakership victory, however: Conservatives successfully pushed to allow a single member to propose what’s known as a “motion to vacate the chair,” a vote that would effectively topple a sitting speaker. And they secured the ability to seat three of their own on the House Rules Committee, which would give McCarthy’s right flank de facto veto power over any bill that comes to the floor.

Conservatives are also claiming victory on enshrining a rule first put in place by Democrats: requiring bills to be released at least 72 hours before a floor vote. But the package approved Monday night includes no new language to enforce that mandate.

At the heart of the rules push by rank-and-file conservatives, including many in the Freedom Caucus, is a desire to shape a more inclusive legislative process that concentrates less power with leadership. To that end, they have secured promises from leaders that aren’t formally written down in the rules, such as allowing more amendments to be considered on the floor and more widely distributing committee positions.

No matter the size of their victories on their side of the Capitol, though, House conservatives are soon to meet up with a harsh reality: Most legislation that passes their chamber is expected to be dead on arrival in the Democratic-controlled Senate.

Here’s a look at the most consequential elements of the rules package that passed Monday night:

Republicans have killed Democrats’ “pay-as-you-go” rule, often shorthanded as PAYGO. It had required legislation that would add to the deficit to be offset with tax increases or spending cuts.

The GOP has replaced PAYGO with what it’s calling CUTGO, which requires mandatory spending increases to be offset only with equal or greater decreases in mandatory spending — no new taxes allowed. The GOP last put this into place in the 112th Congress.

That doesn’t mean that deficit-increasing tax cuts are off the table. The CUTGO rule only requires offsets if bills would increase mandatory spending within a five-year or 10-year budget window. For example, Republicans could pass extensions of the 2017 Trump tax cuts, some of which have set to expire in 2025 (while others already have).

The first bill Republicans are bringing to the floor once the rules package is adopted would increase the deficit by more than $114 billion over a decade, according to a nonpartisan Congressional Budget Office analysis released Monday. The measure from Adrian Smith (R-Neb.) would roll back about $80 billion in IRS funding and decrease revenues by nearly $186 billion.

House Republicans’ historically slim majority will, in its rules package, constrain itself severely on tax rate increases — requiring a three-fifths supermajority vote to pass any.

In practice, however, that’s more of a statement of ideology than a policymaking gesture. Unlike in the Senate, where 60 votes are needed to steer most bills past a filibuster, in the House Republicans will have nearly total control over what legislation and amendments are considered on the floor. And, of course, they aren’t interested in moving proposals to increase tax rates.

The package purges the Democrats’ so-called “Gephardt rule,” which had allowed the House to automatically send a measure extending the debt limit to the Senate when it adopts a budget resolution. That maneuver had been used to let the House avoid a direct vote on lifting the debt ceiling.

There is broad agreement that the U.S. defaulting on its debt would trigger unprecedented fiscal calamity, but the return of this rule could bring back the debt ceiling brinkmanship that took hold on the Hill in 2011 when the U.S. credit rating was downgraded for the first time. Congress is expected to have to act on the debt ceiling sometime by spring.

Republicans have revived the “Holman rule” originated in the 19th century that allows Congress to amend spending bills with the intent of salary reduction or employee termination, or cutting a specific program.

In recent years the rule was used to reduce the salary of the administrator of the Western Area Power Administration to $1 and to eliminate 89 positions at the Congressional Budget Office’s Budget Analysis Division. Both proposals failed to become law.

But Democrats are raising the alarm about the Holman restoration nonetheless. Rep. Gerry Connolly (D-Va.) warned last week that Republicans could use it to “dismantle the federal workforce and carry out political vendettas at the expense of career civil servants.”

To make good on their pledges of more federal government accountability, Republicans are requiring every committee to submit a plan for authorization and oversight to the Oversight and House Administration Committees by March 1.

They also want a full accounting of any unauthorized federal programs and agencies that received funding in the last fiscal year. The rules package further requires committees to weigh whether any programs should be moved from mandatory funding to discretionary funding, which would force that spending out of an automatic process every year and into one controlled by lawmakers.

The House Appropriations, Ethics and Rules Committees are exempt from that mandate.