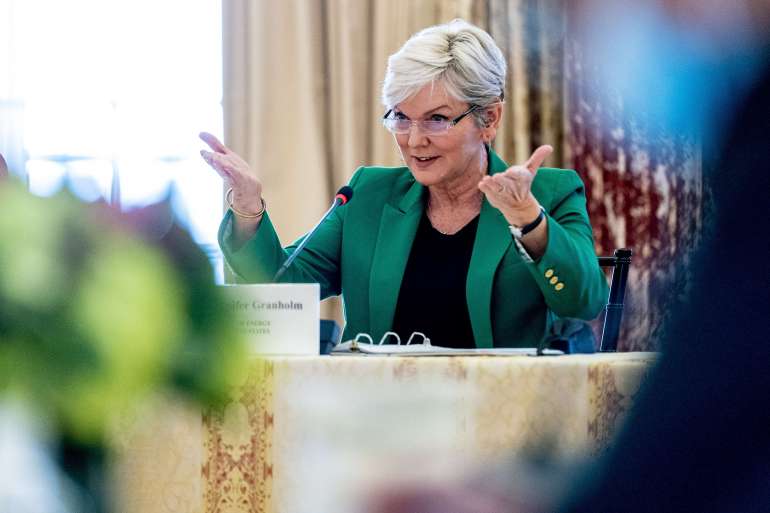 Both measures are typical examples of the not-gonna-pass messaging bills that a party offers when it takes over a chamber of Congress, although the China bill picked up significant Democratic support. Senate Republicans led by Energy Committee ranking member John Barrasso of Wyoming have released similar legislation on the oil reserve this week, as the GOP uses the issue to express frustration with Biden’s broader efforts to wean the economy off fossil fuels to combat climate change.

But Republicans are casting their latest proposal in national security terms — accusing Biden of recklessly making politically timed sales from an emergency reserve created in response to the Arab oil embargo of the 1970s.

“The SPR was created during a time of energy scarcity,” Sen. Kevin Cramer (R-N.D.) said in an interview, adding that Biden should instead unleash production from the nation’s fracking hot spots. “You don’t need an emergency reserve to bail you out of high energy prices. You just need to use the Bakken or Permian Basin.”

Congress has also turned to the petroleum reserve for non-emergency reasons over the years, with lawmakers of both parties pushing oil sales to raise money for needs such as highway construction and drug approvals, and former President Donald Trump once proposed selling off half the SPR’s supplies to shrink the federal deficit. Now, though, Republicans argue that Biden has left the U.S. vulnerable to a severe supply disruption by ordering emergency drawdowns after gasoline prices spiked following Russia’s invasion of Ukraine.

The GOP voiced similar complaints when then-President Barack Obama sold oil from the reserve in response to supply disruptions amid the Arab Spring.

Biden’s releases last year — including a massive release just before the election — totaled more than 200 million barrels of oil from the reserve, a network of underground salt caverns that now holds 372 million barrels. That’s down from 638 million barrels when Biden took office and the reserve’s lowest level since 1983.

The Treasury Department has estimated that the Biden administration’s releases reduced gasoline prices by up to 40 cents per gallon. The national average price was $3.446 a gallon Tuesday, down from an all-time high of $5.016 in June.

The Biden administration has initiated a plan to begin refilling the reserve, but Republicans accuse the president of failing to explain why Russia’s invasion and the subsequent spike in fuel prices qualified as an emergency. They also complain that he hasn’t tended to preserving the physical condition of the reserve’s infrastructure, saying its pipelines, pumps and caverns have been degraded from frequent drawdowns.

“What has caused this and why he [Biden] has had to use it [the SPR] is because of the war on fossil fuels this administration declared when they first went into office,” Rep. Buddy Carter (R-Ga.), a member of the House Energy and Commerce Committee, said in an interview. “He is jeopardizing our energy security, which jeopardizes our national security.”

Democrats, meanwhile, are welcoming the GOP effort as an opportunity — to remind the public that gasoline prices have fallen on their watch.

The price drop is thanks in part to Biden’s appropriate use of the SPR, Democrats say.

The administration has “used it very reasonably for exactly the situation it should be used — for an emergency situation that is brought on by worldwide factors, whether it’s a war in the Middle East or a war in Ukraine,” said Sen. Angus King of Maine, an independent who caucuses with Democrats, in an interview.

Energy Secretary Jennifer Granholm went to the White House on Monday to argue that the latest House bill “needlessly aims to weaken” the efficacy of the SPR as a tool to respond to crises, and would drive up gas prices during an oil shortage. (The bill would provide an exception “in the case of a severe energy supply interruption,” caused by hurricanes or other natural disasters).

Her comments were followed by a White House statement warning that Biden would veto the bill.

House Democrats led by Energy and Commerce Committee ranking member Frank Pallone of New Jersey are countering with their own bill that would create an “Economic Petroleum Reserve” within the SPR, allowing the Energy Department to buy oil when prices are low and sell it when they are high, essentially making the U.S. government an oil trader. They plan to offer the measure as an amendment to the GOP legislation.

“This is not serious legislating,” Pallone said of the GOP effort at a news conference Tuesday. “It’s just a giveaway to the fossil fuel industry that’s already profiting from high oil prices. And it’s hypocritical. Because releasing oil from the SPR has been done by presidents from both parties for decades.”

Democrats also say Republican calls for increasing fossil fuel production on federal lands as part of their legislative push is misplaced because only 10 percent of U.S. oil and natural gas production occurs on federal lands. And they say that while Biden has limited leasing of new federal acreage for oil and gas sales, his administration has issued permits to drill at a rate outpacing the early months of the Trump administration.

House Energy and Commerce Chair Cathy McMorris Rodgers (R-Wash.) countered by noting that gasoline prices have increased over the past month by an average of 30 cents a gallon nationwide, offsetting much of the 40-cent price decrease the administration has been touting.

And Republicans say Pallone’s amendment would amount to anti-competitive government intervention in the global oil marketplace that would lead to higher prices over time.

“Republicans want durable, long-lasting relief at the pump,” McMorris Rodgers said in a statement Tuesday. “The best way to do this is by unleashing American energy, which is what H.R. 21 helps accomplish.”

The oil and gas industry is staying largely silent on the bill, instead placing a priority on issues such as easing permit rules for pipelines and natural gas export terminals.

“Industry generally wants the feds to stay out of markets,” an energy industry lobbyist told POLITICO, insisting on anonymity to speak candidly. “But they also like market stability, which SPR sales helped provide. This is all messaging.”

One exception was the American Exploration and Production Council, a trade group representing independent oil and gas producers, which came out in support of the GOP bill. The Biden administration “should not use our Strategic Petroleum Reserves as a tool to increase crude supply while simultaneously pursuing policies that suppress domestic production of crude and natural gas,” council CEO Anne Bradbury said in a statement.