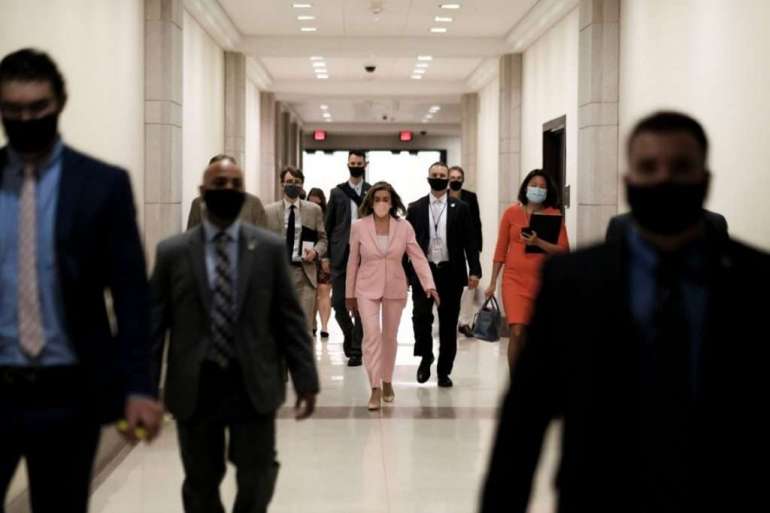 “Hopefully what will happen is the Republican senators will take this bill when it comes across, they’ll amend it and actually address many of the things that are hurting America right now in terms of this pandemic response and be able to get it to the president’s desk,” he said.

The opposing views are evidence that top negotiators are still far apart on reaching any legislative deal: on USPS funding or a larger coronavirus relief package. Meadows, who went to Pelosi’s office on Capitol Hill on Saturday but was unable to meet with her, said he will call the California Democrat later Sunday. He argued, however, that the House bill isn’t serious because it doesn’t address USPS’ long-term sustainability.

“My conversations with a lot of the Democrats on Capitol Hill yesterday is if you want to be serious about it, this president is willing to put forth money and reforms, but let’s attach it to something else since we’ve got so many people hurting,” Meadows told host George Stephanopoulos on ABC’s “This Week.”

The White House chief of staff and former North Carolina congressman questioned why Democrats only addressed the Postal Service and not enhanced unemployment benefits, an extension of the Payment Protection Program for small businesses or funding for schools.

“The speaker said she wasn’t willing to do anything piecemeal and yet we have a piecemeal piece of legislation on a Saturday,” Meadows told “Fox News Sunday” host Chris Wallace.

“My challenge to the speaker this morning would be this: If we agree on five or six things, let’s go ahead and pass those,” he added on “This Week.” “I spoke to the president early this morning. He’s willing to sign that, including Postal Service reform and making sure that the money is there to make sure that deliveries of first-class mail are handled quickly, efficiently and on time.”

Pelosi described Meadows’ proposals as “bare leaves,” criticizing the fact that he didn’t mention any policies addressing children facing food insecurity, families on the verge of eviction, coronavirus testing and treatment, or money for state and local government.

“What they wanna do is not the right path,” she said. “All the president wants is this one thing: He wants his name on the letter to go out with a check in it, and he doesn’t care about the rest of it.”

Pelosi noted that it’s been 100 days since House Democrats passed their Heroes Act. In that span, more than 4 million additional Americans have been infected with Covid-19, and more than 80,000 people have died.

“Could we have saved all of those lives and those diagnoses? Not all but many,” Pelosi said.

“So, again, when we go to putting money into people’s pockets, as the president wants to do with that letter, we have to do so not in a bread and circuses way — ‘I’m gonna give you this, but I’m not giving you anything else.’ This is like ancient Rome. Trump fiddles while America burns, and Trump gives bread and circuses without the bread. So we’ll see the circus this week with his convention.”