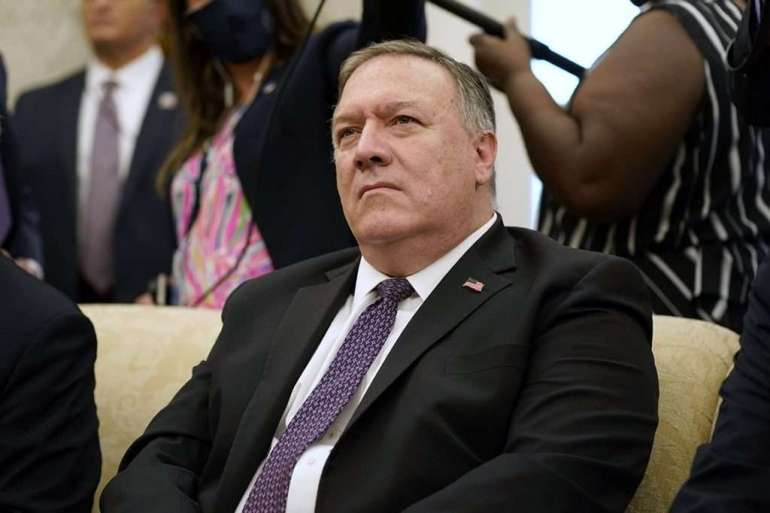 In the hearing, Undersecretary of State for Management Brian Bulatao laid out several areas where he contended Linick failed in his job, including that he’d failed to complete a legally required audit on time, that under Linick fewer inspections were started and fewer inquiries were closed, that internal surveys showed low morale in the inspector general’s office.

Bulatao also implied Linick might have been responsible for leaking a draft inspector general report to the news media. A spokesperson for Linick did not immediately offer comment on Bulatao’s allegations, but Linick has in the past noted that an outside investigation found no evidence anyone in his office leaked the inspector general’s report.

Democrats on the panel dismissed Bulatao’s explanations, accusing Pompeo of seeking Linick’s dismissal because of investigations he had opened into the secretary’s use of taxpayer dollars and Pompeo’s declaration of an emergency allowing him to skirt congressional approval to sell arms to Saudi Arabia.

Congressional Democrats are investigating why Pompeo engineered the firing of Linick, who had served as the State Department’s inspector general since 2013. It has taken months for House committees and aides to Pompeo to agree on a hearing schedule, with lots of legal wrangling and harsh public exchanges along the way.

Pompeo asked President Donald Trump to fire Linick, and the president did so in mid-May. Linick became one of several inspectors general the president has sidelined. Democrats have criticized the moves, saying Trump is trying to evade accountability.

Inspectors general are supposed to act as independent watchdogs who root out waste, fraud and abuse in federal agencies. It’s rare for a president to fire an inspector general, and Linick has said he was surprised to be pushed out.

The night Linick was fired, Engel revealed that the inspector general had been investigating whether Pompeo and his wife, Susan, had been improperly using taxpayer resources. The allegations including asking staff to run personal errands for them.

Linick was also looking into whether Pompeo acted properly in using an emergency declaration to approve arms sales to Saudi Arabia over the objections of members of Congress.

The inspector general’s report on that case found that Pompeo acted within his legal authority, but it raised questions about the timing of the emergency declaration and found that the State Department didn’t fully consider the risk of civilian casualties in places like Yemen when it approved the arms sales.

Two other Pompeo aides at State, acting legal adviser Marik String and Assistant Secretary of State for Political-Military Affairs R. Clarke Cooper, both defended Pompeo’s emergency certification to greenlight the arms sales, contending that Iran posed a dire threat in the region. String also noted that the language used to fire Linick was similar to language used during the Obama administration to fire inspectors general. The aides also insisted that Pompeo was unaware Linick had opened investigations into him and his wife.

In one contentious exchange, Rep. Brad Sherman (D-Calif.) wondered why a delayed annual audit was considered a fireable offence when he claimed that State is “chronically late” in producing other reports “critically necessary for policy matters of life and death.” Sherman also dismissed Bulatao’s assertion that low morale was isolated to the inspector general’s office.

“If you had any integrity, you’d also be calling for the resignation of Secretary Pompeo,” Sherman told Bulatao.

“All of us in this room know what morale is like at his State Department,” he said. “If low morale is reason for someone to be fired, look up, not down.”

Republicans on the panel, meanwhile, defended the decision to fire Linick, pointing to the reasons outlined by Bulatao.

In his opening remarks, the committee’s ranking Republican, Rep. Michael McCaul of Texas, said he hoped that after Wednesday’s hearing he hoped the panel could “put this matter behind us.”

Rep. Scott Perry (R-Pa.) said that in light of what Bulatao said were “substantial and numerous” failures by Linick, Democrats’ defense of the former inspector general “runs contrary to our duty to maintain the public’s trust.”

Pompeo has denied knowing that Linick was investigating him and his wife, and he’s dismissed any claims of wrongdoing. Linick has told lawmakers that he informed some of Pompeo’s top aides about the probe.

In letters to lawmakers since Linnick’s firing, top aides to Pompeo, including Deputy Secretary of State Steve Biegun, have insisted that to the extent they’d been told about the investigation into the secretary and his wife, none of them informed Pompeo.

Since Linick’s dismissal, other frustrations with the Pompeos have come to light, though it’s not clear whether the inspector general’s office is weighing them as it continues to probe the actions of the secretary and his wife.

NBC News revealed that the Pompeos have been hosting fancy, taxpayer-funded dinners primarily for prominent people with no connection to diplomacy. The so-called Madison Dinners have troubled State Department employees who suspect they are aimed at building Pompeo’s support and donor base ahead of a future run for political office.

There also are questions about how the Pompeos managed to get permission to rent a home on a U.S. military base and whether it was appropriate to take Susan Pompeo on a trip to the Middle East during a U.S. government shutdown.