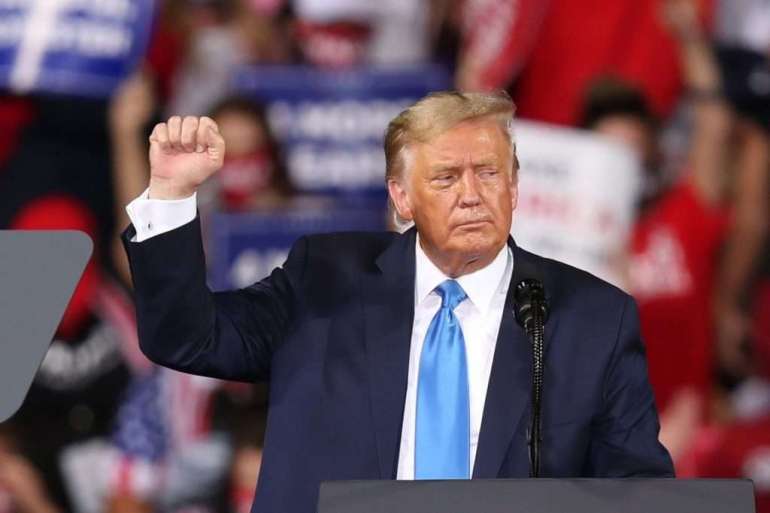 Amanda Renteria, national political director of Clinton’s 2016 campaign, said the difference between the closing weeks of the 2016 election and now is that Biden holds a more substantial lead nationally and in the battleground states. But Renteria also notes that Trump “has been able to carry a narrative that this thing’s going to be close … setting up a narrative that no matter what, even if there is a blowout, that it’s somehow rigged.”

In addition, Trump has executive powers he did not possess in 2016 — along with an iron grip on the Republican Party machinery in numerous battleground states that could facilitate his machinations. Many observers believed Trump’s Republican National Convention speech from the White House violated federal law, Renteria observed, but it went forward, anyway.

“The conversation about the ‘how to’ is what we need to be having right now, as we think about what happens when he doesn’t want to leave office, and I do know those conversations are happening,” she said.

In a nod to the gravity of the concerns, Sen. Bernie Sanders departed from custom in a speech Thursday in Washington billed as a “major address on Trump’s threat to democracy.” The two-time Democratic presidential candidate spent over a week writing it, used a teleprompter and strayed uncharacteristically from his standard stump speech about income inequality and health care — only mentioning the issues momentarily to say, “today I am not going to talk about any of them.”

“It is terribly important that we actually listen to and take seriously what Donald Trump is saying,” Sanders said.

Some Democrats fear they may not be doing enough to prepare. Rep. Ro Khanna of California said his party needs a more detailed plan than they currently have for how to handle any nightmare scenarios after the election.

“I think this has to be the highest priority,” he said. “We need a framework. We need a plan from the speaker and Senate leaders about how this election is going to proceed. Everyone sees the train wreck coming.”’

Biden’s campaign is assembling a voter protection staff with a far larger footprint than Clinton’s equivalent in 2016. In addition to a national voter hotline, it has set up 15 state-specific ones. It has a large team of lawyers, including two former solicitors general, Donald Verrilli and Walter Dellinger, and a group headed by Marc Elias, a prominent election law attorney, focusing on voter access and ballot counting in the states. The campaign says it will spend at least $100 million on voter-education efforts alone.

In Pennsylvania, a potential hot spot for Election Day chaos, Democrats have begun talking about their concerns that the GOP-controlled state Legislature might appoint pro-Trump electors regardless of the results, all under the guise of massive voter fraud.

“For the past 10 days or so, I’ve been getting so many questions about this from people involved in state politics,” said Adam Bonin, a prominent Philadelphia-based lawyer who brought a recent Democratic lawsuit seeking to make it simpler to cast a mail ballot in Pennsylvania.

But some Democrats don’t think there has been an adequate conversation on the topic yet. Asked whether the party is discussing how to respond, one state House member said, “Not enough.”

Your guide to the year-round campaign cycle.

Lyndsay Kensinger, the press secretary for Democratic Gov. Tom Wolf, said the administration is confident “this November’s election will produce a clear winner that must be respected by the General Assembly.” But Kensinger declined to discuss the legal options Wolf has to stop such a plan.

Biden himself, some Democrats believe, may not be the best messenger in the party’s effort to oppose Trump on issues surrounding the mechanics of the election. In part, that is because he is personally invested in the contest. Congressional Republicans maintain there will be a peaceful transition of power if Trump loses. And it may be more effective for Democrats to highlight concerns of some moderate Republicans, and to encourage others to speak out.

In addition, the Biden campaign is still trying to win votes — something separate from concerns about what happens after — laboring to keep the focus of the election on Trump’s handling of the coronavirus pandemic and the economy.

Kate Bedingfield, Biden’s deputy campaign manager and communications director, told reporters on Thursday that Trump is “trying to distract from his catastrophic failures.”

“What country are we in?” Biden told reporters when asked about Trump’s unwillingness to commit to a peaceful transition of power, according to a pool report. “I’m being facetious. I said what country are we in? Look, he says the most irrational things. I don’t know what to say.”

Still, Doak offered on Twitter that Biden could say something more forceful, such as, “This indicates he thinks he is going to lose, which most polls indicate, it is an extreme profession of weakness” — countering Trump’s effort to portray the election as closer than it is, and to cast doubt on its outcome.

“The history of Trump is that we have underestimated him and his venality at every turn,” he said. “We’re in a perilous time right now.”