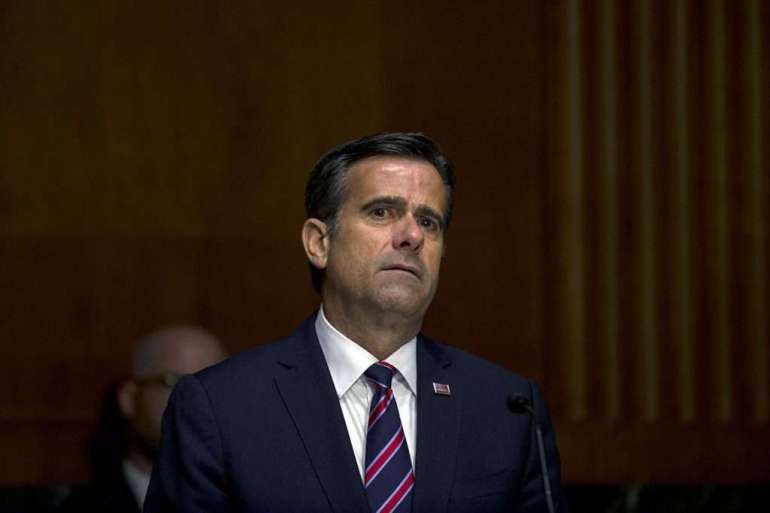 The aide invited congressional leadership aides and staff from three committees — the Senate Judiciary Committee, as well as the House and Senate Intelligence committees — to the Senate Intelligence Committee’s secure workspace for a 7:15 p.m. briefing, just 39 minutes later. The invitation sent staffers, many of whom are working remotely because of the coronavirus pandemic, scrambling to get to the Capitol in time.

“Sorry in advance for the short notice, but if Members in receipt of this letter are available, the DNI will likely be heading down to brief Chairman Graham, Chairman Rubio and other Members who can attend,” read the email from Ratcliffe’s legislative affairs chief, Rob Cooper.

The timing and rushed nature of the briefing — a sharp departure from typical briefings arranged by ODNI — led some Democrats to suggest it appeared designed to offer Graham and only a limited audience of lawmakers and aides the details about a significant national security matter, while blocking others’ access and creating logistical challenges they knew couldn’t be overcome.

Graham on Wednesday denied that he had been “privately briefed.”

At the conclusion of the email from ODNI, Cooper added, “Knowing that this is very short notice and many may not be able to attend, we would be happy to set up another session that other interested Members can also attend.“

The House Intelligence Committee has requested a separate briefing, according to a congressional aide.

The invitation described the briefing as being intended primarily for Graham and Sen. Marco Rubio (R-Fla.), the acting chairman of the Senate Intelligence Committee, even though Rubio was unavailable to attend.

Ratcliffe’s office later prevented some of those committee and leadership staffers from participating in the briefing, with the exception of those who work for the Senate Intelligence Committee, according to sources familiar with the matter. The sources said officials with Ratcliffe’s office claimed they could not verify whether the staffers were cleared to receive the specifics on the Russian intelligence.

Just hours earlier, Graham had released a letter from Ratcliffe revealing a Russian intelligence assessment stating that Hillary Clinton, the Democratic presidential nominee in 2016, personally approved a campaign strategy to pin Russia’s hack of the Democratic National Committee on Trump and his campaign.

Ratcliffe noted that the U.S. intelligence community “does not know the accuracy of this allegation or the extent to which the Russian intelligence analysis may reflect exaggeration or fabrication” — leading Democrats and, privately, some Republicans to question why Ratcliffe and Graham released it in the first place. POLITICO reported Tuesday that the Senate Intelligence Committee quickly rejected the Russian assessment as part of its three-year investigation into the Kremlin’s 2016 interference campaign.

On Wednesday, Graham defended his decision to release the information despite concerns about its veracity, maintaining that it was important to ask former FBI Director James Comey, who testified before the Judiciary Committee earlier Wednesday, whether federal officials pursued allegations against Clinton “with the same vigor” as they investigated claims about Trump’s ties to Russia.

Graham has been spearheading an investigation into the origins of the Russia probe — an inquiry that Trump has openly encouraged and that Democrats have derided as a politically motivated effort.

“I am really concerned that we are treating this Ratcliffe letter as something at all serious or credible. And, Mr. Chairman, I hope very much that nobody from this committee had any hand in generating this letter,” Sen. Sheldon Whitehouse (D-R.I.) said during Wednesday’s Judiciary Committee hearing, referencing Ratcliffe’s letter.

“This rings just innumerable bells about the dangers of selective declassification.”

Trump referenced the disclosure in his first debate with Joe Biden, the Democratic presidential nominee, on Tuesday night. It was among several allegations pushed by Senate Republicans in recent weeks that Trump used to bludgeon his opponent.