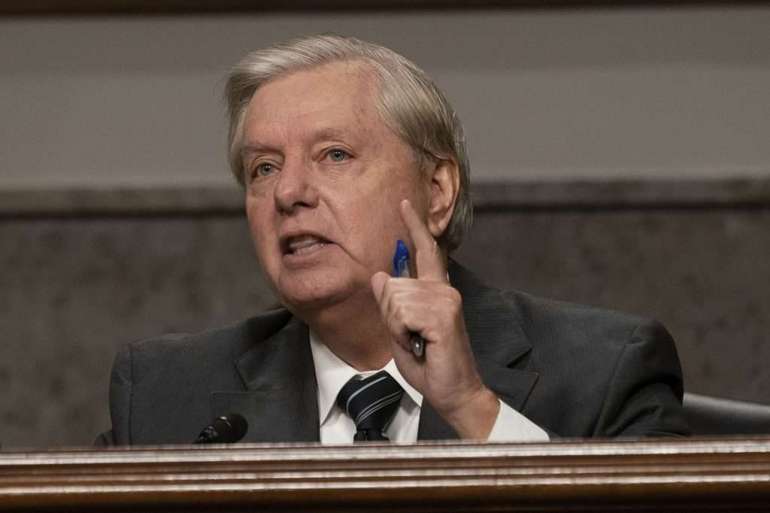 “I don’t think anything’s changed, I think Senator Schumer wants to vote in February, most of my Republican colleagues want to vote Thursday,” said Sen. John Kennedy (R-La.), a member of the Judiciary Committee, who plans to attend the hearing in person. “I figure we’ll meet in the middle and vote some time before the election.”

The Republicans’ insistence that they will push forward quickly with Barrett’s confirmation comes after President Donald Trump late last week announced that he and first lady Melania Trump tested positive for coronavirus. At least 30 people connected to the president or the GOP have tested positive since his early Friday announcement, and two of the three senators who have the virus — Lee and Tillis — attended the Sept. 26 Rose Garden event at the White House, where Trump officially announced Barrett as his nominee to replace the late Justice Ruth Bader Ginsburg.

Johnson (R-Wis.), who revealed Saturday he has coronavirus and will stay isolated until his doctor gives him the all-clear, said in an interview with “The Ross Kaminsky Show” that he would do whatever it takes to vote for Barrett, even with a positive diagnosis.

“If we have to go in and vote, I’ve already told leadership I’ll go in a moon suit,” said Johnson, who canceled his in-state events to prevent having to go into self-quarantine before the vote. “I would certainly try to find a way, making sure that everybody was safe … where there’s a will there’s a way.”

In a sign that the confirmation process is going according to plan, the Judiciary Committee on Monday officially noticed Barrett’s hearing to begin at 9 a.m. next Monday and will run through Oct. 15. The first day will include opening statements from Barrett and several senators, the second and third day will be reserved for senators to ask questions of the nominee, and the fourth day will consist of outside experts.

Senators will have the option to attend the hearing virtually, similar to previous Judiciary Committee hearings, though Judiciary Chair Lindsey Graham (R-S.C.) will appear in person.

Lee (R-Utah) and Tillis (R-N.C), who are quarantining for 10 days, sit on the committee and are expected to return for a panel vote, slated for Oct. 22. A spokesperson for Tillis said Monday that the North Carolina Republican is no longer exhibiting symptoms and continues to self-isolate.

But Senate Democrats argue that if the Senate isn’t safe enough to be in session, the Judiciary Committee also shouldn’t convene.

“Every Senator and relevant staff must have negative tests on two consecutive days and have completed the appropriate quarantining period, and there should be mandatory testing every day of the hearing,” Schumer said.

Senate Majority Leader Mitch McConnell (R-Ky.) shot back at Schumer’s request to delay the hearing Monday, arguing that the Senate has held 150 hybrid hearings and therefore is well-prepared.

“It is nonsense to suggest that the tools that Senate Democrats have been happily using across all our committees for months have suddenly gone bad overnight,” McConnell said.

The battle to confirm Trump’s third Supreme Court nominee is taking place just weeks before Election Day. Democrats are calling for Senate Republicans to allow the winner of the election to fill the vacancy and have cited McConnell’s 2016 blocking of former President Barack Obama’s nominee, Merrick Garland, from going forward. Republicans, however, have claimed the situation is different now because the GOP holds both the Senate and White House.

The latest round of coronavirus cases on Capitol Hill has renewed calls for House and Senate leadership to implement widespread testing for members and their staff. But so far, Speaker Nancy Pelosi (D-Calif.) and McConnell are not signaling any change of course.

The Senate Judiciary Committee, however, is taking precautions for next week’s hearings, including stations with personal protective gear, sanitary stations and limiting the number of people allowed to enter the hearing room.

During a call with reporters Monday, Sen. Amy Klobuchar of Minnesota, the top Democrat on the Rules Committee, acknowledged that lawmakers will have the option of a remote hearing, but reiterated concerns about health for staffers and senators, as well as the format.

Sen. Marsha Blackburn (R-Tenn.), another member of the Judiciary Committee, accused Schumer and Democrats of trying to use delay tactics.

“They’re going to say it is different because they don’t want it to happen,” Blackburn said. “Their premise is if they won, they don’t want the Supreme Court standing in their way to implement their agenda.”