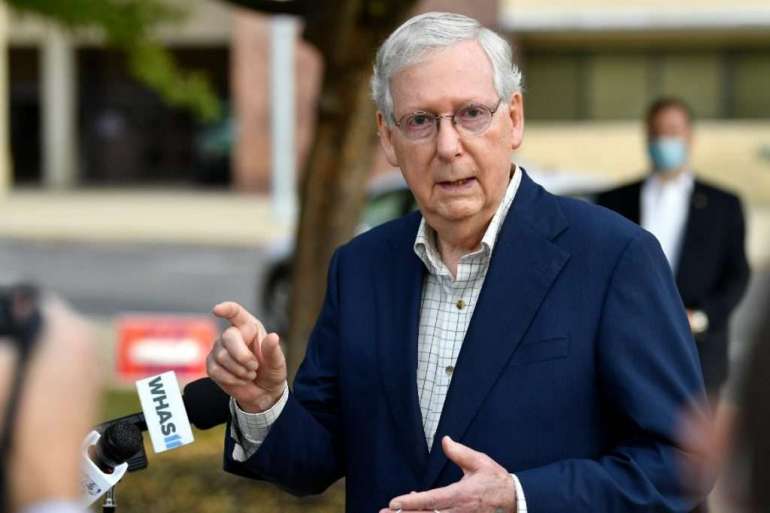 The Senate will come in on Monday next week and then stay through the following weekend to finish Barrett’s nomination. The committee vote on Barrett is now 1 p.m. next Thursday. Without Democratic cooperation, which is unlikely, that means Barrett would probably be confirmed on Oct. 26.

But first, McConnell will bring a coronavirus aid bill to the floor that he expects Democrats to reject. Democrats have not explicitly committed to blocking it yet.

McConnell described it as a $500 billion package that provides more money for the Paycheck Protection Program, hospitals and schools.

“That’s a lot of money … to target the actual needs the country has. I’m not anticipating they’re going to support it but I’m going to give them the opportunity,” McConnell said of Democrats.

President Donald Trump has urged Congress to go “big” and his long-shot administration’s negotiations with Speaker Nancy Pelosi (D-Calif.) continue. McConnell dismissed Pelosi’s demands as a “$2.5 trillion grab bag” and when asked about Trump’s hopes for a bigger package, replied: “I’m putting on the floor what we think is appropriate to tackle the disease.”

A few minutes later on Fox Business, Trump said he would “go higher” than the $1.8 trillion offer his administration has made to Democrats.

The intraparty Republican disagreement over stimulus came amid a sharply partisan battle in the Senate Judiciary Committee. Democrats objected to Republicans moving forward with Barrett before she’d answered questions for the record and while the Senate was in recess. Democrats also added that under committee rules Republicans did not have enough members of the minority to move forward.

“This rushed, sham process is a disservice to our committee… in a way that is historically unprecedented,” said Sen. Richard Blumenthal (D-Conn.). “The purpose of doing it is simply to have a Justice on the Supreme Court as the president said to decide the election and strike down the Affordable Care Act.”

Sen. Lindsey Graham (R-S.C) retorted that Democrats would do the same if they were in power, and moved forward with the vote.

“It’s clear to me what’s going to happen is we’re going to be denied the ability to operate as normal, that Sen. Schumer said that everything is on the table,” Graham said. “If we create this problem in the future, you’re going to do what I’m going to do which is move forward on the business of the Committee.”

Blumenthal entered the room part way through and voted not to move forward with Barrett’s nomination. Blumenthal then offered a motion to indefinitely delay her nomination but it failed 10-12.

The Judiciary Committee vote comes after three days of hearings where Democrats sought to pin Barrett down on Obamacare, abortion rights and other issues — questions she largely declined to answer, citing the so-called “Ginsburg rule” to avoid providing details about how she might rule. Democrats, however, argued that she was evasive.

“I would be afraid to ask her about the presence of gravity on Earth,” said Senate Minority Whip Dick Durbin (D-Ill.). “She may decline to answer because it may come up in a case”