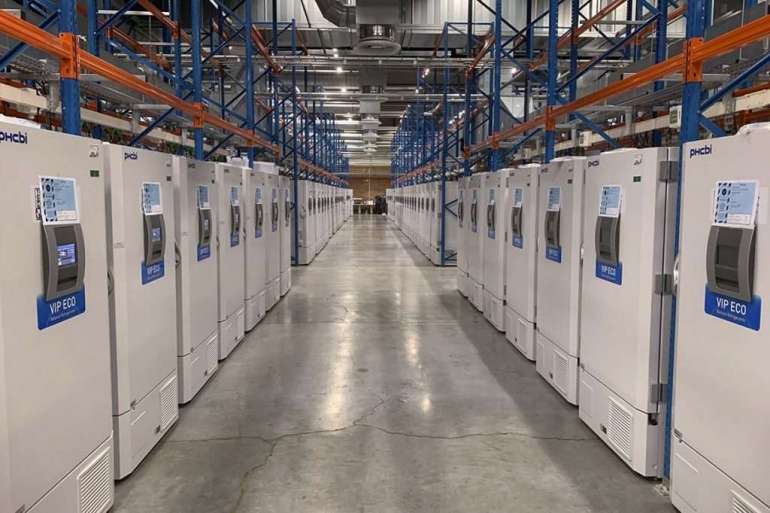 “We really don’t want to lose a drop of this stuff, so it’s a concern. And I don’t have all the answers for how we’re going to do this yet,” said Paul Cieslak, Oregon’s medical director for communicable diseases and immunizations.

The vaccine, if authorized on an emergency basis, is expected to be given first to health care workers and the elderly, further complicating planning efforts.

Most of the concern stems from the requirements for the Covid-19 vaccine that Pfizer on Friday submitted for FDA review. It must be kept in ultra-cold conditions and will be shipped in specially designed pizza-shaped boxes that hold a minimum of 975 doses in 195 glass vials. Once a vial is thawed and diluted to make five shots, health workers will be in a true “use it or lose it” situation: If there aren’t enough people ready for the shots within six hours, the vaccine spoils, slowing efforts to stamp out hot spots and save lives.

“That won’t be acceptable,” said Douglas Hoey, CEO of the National Community Pharmacists Association. “Especially early on it will be practically liquid gold.”

Some waste is unavoidable in any large-scale immunization program. But this isn’t the seasonal flu: Any Covid-19 vaccines that are cleared for use will land during a devastating global pandemic that has killed nearly 1.4 million people worldwide — including over a quarter million in the United States — with no signs of stopping. With analysts predicting that it could take months to vaccinate all Americans, minimizing waste will be crucial.

The earliest vaccinations will be concentrated in hospitals, federal health officials say. Even they could struggle to minimize the number of spoiled doses as they vaccinate staff. But the waste issue will loom larger as pharmacies are gradually added into the mix — especially those in rural areas where there are fewer people.

Maryland health officials told the Centers for Disease Control and Prevention that as much as 5 percent of the vaccine the state is allocated could spoil and go unused.

Some rural counties may not be able to use up 975 doses by themselves, said Kurt Seetoo, who manages the state health department’s Center for Immunization. Maryland is exploring creating regional clinics, bringing together high priority groups from different rural counties to vaccinate all at once.

HHS Secretary Alex Azar on Friday told Sirius XM that Pfizer’s more challenging storage requirements make it a better fit for larger institutions like hospitals and big retail pharmacies. Another Covid-19 vaccine maker, Moderna, will soon apply to FDA for emergency authorization of its shot — which can be stored in a refrigerator for up to 30 days and at room temperature for up to 12 hours.

Earlier this week, Gen. Gustave Perna, who leads Operation Warp Speed, the Trump administration initiative charged with bringing a vaccine to market, said CVS and Walgreens know how to do this and that his team has worked with states to “make sure that no vaccine is wasted.”

But Paul Offit, a vaccine researcher at the Children’s Hospital of Philadelphia and a member of the expert panel advising the FDA on Covid-19 vaccines, told reporters Friday that he is “very concerned” about the potential for doses of Pfizer’s vaccine going to waste if it is authorized.

In Oregon, the state may contract with emergency medical providers to drive around and divvy the vaccine up among remote areas — an attempt to avoid having leftover shots.

And North Dakota wants to repackage the vaccine into boxes with smaller quantities, while encouraging providers to be able to rapidly identify people in the next priority group to come get a shot if there’s any leftover vaccine. The state is also asking facilities to pre-register patients to ensure that no vaccine needs to be tossed. Its vaccine plan acknowledges that this could delay distribution by a day but it is necessary to preserve precious vials. Pfizer says it is working on a smaller pack size, but it won’t be ready until early next year and it is unclear if it will resolve the need to deliver at least five shots within hours.

The varying plans underscore the concerns public health experts have long raised about the hands-off approach the Trump administration has maintained throughout the pandemic. That has held true even for the final leg of the vaccine race, which the president has made the centerpiece of his coronavirus response.

Meanwhile, the Trump administration refuses to share its planning with the transition team of President-elect Joe Biden, who said Wednesday the lack of access could hamper vaccine distribution. Instead, Biden’s team has been in contact with Pfizer and other drugmakers; a Pfizer spokesperson declined to share specifics of the communication.

“There is no excuse not to share the data and let us begin to plan,” Biden said Thursday during a press conference. “If we don’t have access to all this data, it’s going to put us behind the eight ball by a matter of a month or more. And that’s lives.”

Azar disputed the assertion Friday on CBS’ “This Morning,” saying it is “absolutely incorrect.”