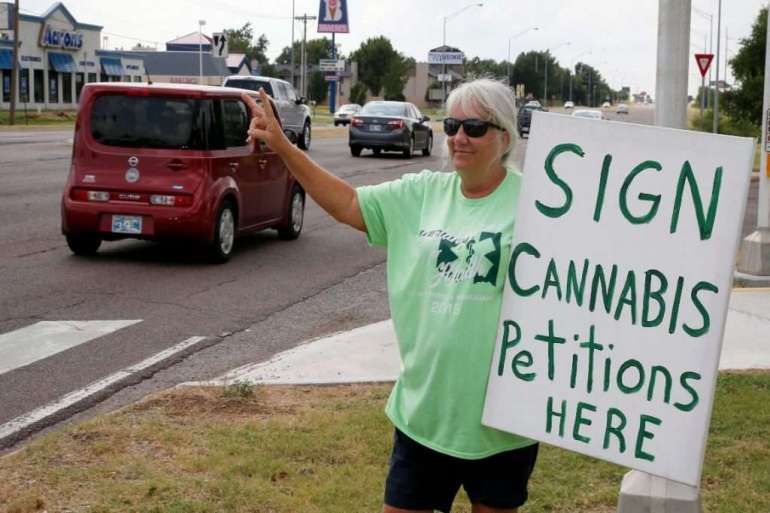 Sen. Mike Rounds (R-S.D.), for example, remains decidedly anti-weed although his home state made history by legalizing both medical and recreational marijuana on Election Day.

“I have not changed my position on it. I think this is really bad public policy,” Rounds said. He said he does not plan to work on revising federal marijuana laws, even piecemeal legislation like access to banking for cannabis businesses. “I never say I will never do anything, but most certainly I am not going to be a proponent of any type of actions along that line.”

Some 49 percent of Republicans and 83 percent of Democrats support full legalization of marijuana, according to Gallup.

“I think it’s seen as a Democratic issue and a libertarian issue,” Democratic pollster Celinda Lake said. “But real voters, Republican real voters, are in favor of it, too.”

Despite Democratic support, their best-case scenario is a 50-50 share of the Senate after Georgia’s runoffs in January, and cobbling together enough votes for a legalization bill would be a challenge.

The Democratic-led House, meanwhile, plans to vote on removing all federal marijuana penalties and erasing marijuana-related criminal records as soon as this week — setting a benchmark on the issue for the next Congress. Even with a Democratic majority, though, a vote on the bill originally set for September was delayed because moderate Democrats worried that voting to legalize cannabis without securing a coronavirus aid package would have hurt them on Election Day.

Lake said their calculus was wrong.

“I think it was founded in reason that is 20 years old,” Lake said. “I think some politicians have no idea how fast the voters have moved on this.”

Democrats will have a slimmer majority in the House come January, but advocates still anticipate that the passage of weed laws in red states — and the addition of members from both parties to the ranks of legal state lawmakers — means the chamber will advance a broad cannabis agenda.

But the Senate is key to any major change to federal cannabis law. Without a Senate open to considering comprehensive legislation, any major bills passed by the House are likely to stall. The best chance for any cannabis legislation in the 117th Congress will be small policy changes.

“[Cannabis legalization] is going to happen, I’m confident,” said Democratic Sen. Cory Booker, whose home state of New Jersey legalized recreational marijuana on Election Day. “But how it happens and when it happens is the question.”

The next Senate will include 30 members who represent states where marijuana for adult use is legal — eight more than are in the chamber now — including six Republicans. Piecemeal legislation that boosts medical marijuana research or improves access to banking for the cannabis industry is gaining support from both parties, and those bills are the most likely to move in the next Congress.

The SAFE Banking Act passed the House last year with strong bipartisan support and was discussed by the Senate Banking, Housing and Urban Affairs Committee. Next year, the bill may get an extra lift thanks to the shuffling of committee chairmanships.

Pennsylvania Sen. Pat Toomey, who will chair the Senate Banking Committee next year if the GOP retains the Senate, said he’s willing to consider the bill. Toomey’s home state of Pennsylvania allows medical marijuana use, so he has more incentive to act than current Chairman Mike Crapo (R-Idaho) — who hails from one of only two states that do not allow any form of marijuana, even for certain medical conditions.

“I am sympathetic to the idea that people who are involved in [the] cannabis industry — in an entirely legal fashion, in the state in which they operate — ought to be able to have ordinary banking services,” Toomey said.

The passage of marijuana laws in red states also will affect moderate Democrats and legal state Republicans in the House, lawmakers and lobbyists say, potentially encouraging some from both parties to shift to a more pro-marijuana stance.

“I think most Republicans will believe it to be a states’ rights issue in the states that have voted [to legalize],” said Rep. Dave Joyce (R-Ohio), a co-chair of the Congressional Cannabis Caucus. “And now it’s a matter of federal policy getting in line with the states and not punishing them for making the decision that they’ve made.”

The Congressional Cannabis Caucus in the House has been around since 2017, and it always has had two Democratic and two Republican co-chairs. The Democrats are Earl Blumenauer and Barbara Lee, who represent the traditionally blue, “left coast” states of Oregon and California. The Republicans are Rep. Don Young — whose home state of Alaska has a strong libertarian ideology and legalized recreational marijuana in 2014 — and Joyce, whose home state of Ohio legalized medical marijuana in 2016.

But evolution on weed doesn’t occur immediately for all lawmakers after their states legalize. Oregon’s lone Republican lawmaker, Rep. Greg Walden, said he did not vote in favor of the initiative that legalized marijuana in Oregon in 2014, but now wants to “treat it like alcohol.”

“I moved a long way from where I certainly started, to respect the will of the voters,” said Walden. “I think over time, you’re gonna see this move forward.”

Maneuvering to capitalize on those votes has already begun. Joyce said he and Blumenauer are working to bring together a cannabis coalition in the coming weeks that includes members from newly legal states.

Rep. Alexandria Ocasio-Cortez, who in September pushed for the MORE Act vote to happen before the election so Democratic lawmakers could campaign on it, predicted that holding back on marijuana reform in the next Congress could actually hurt the Democratic party in the long run.

“We’re now in a race. That’s a warning sign, that Republican states are now starting to legalize,” Ocasio-Cortez said. “If Republicans beat Democrats on marijuana legalization … who are moderates gonna blame after that?”