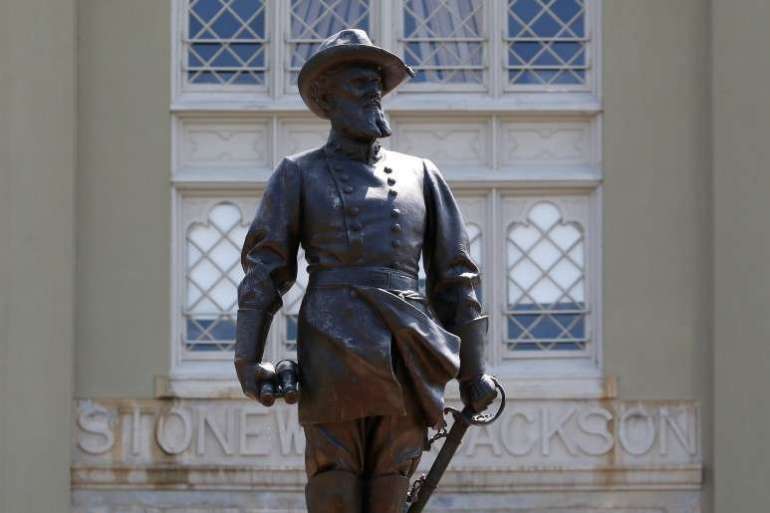 Founded in 1839, VMI says it is the oldest state-supported military college in the U.S.

The Post’s story also led to the ouster of VMI’s superintendent, retired Army Gen. J.H. Binford Peay III, and prompted state officials to commit to hiring an outside firm to investigate the students’ allegations.

The statue had been a subject of controversy for years, but the school had committed to keeping it in place in front of VMI’s historic barracks as recently as July. VMI said it will be relocated to a nearby Civil War museum at a battlefield where dozens of VMI cadets were killed or wounded.

Amid a wave of Confederate monument removals around the country in the wake of George Floyd’s killing in Minneapolis, some VMI students and graduates called for the statue’s removal.

Peay said at the time that the school would change some of its longstanding traditions, such as relocating an oath ceremony from the Civil War battlefield. But he said it would not remove the statue of Jackson, who owned enslaved people, or rethink the names of buildings honoring Confederate leaders.

“Unlike many communities who are grappling with icons of the past, VMI has direct ties to many of the historical figures that are the subject of the current unrest. Stonewall Jackson was a professor at VMI, a West Point graduate who served in combat in the Mexican War, a military genius, a staunch Christian, and yes, a Confederate General,” Peay wrote in July.

Change was also slow to come to VMI when, in the 1990s, the school spent six years and millions of dollars in a high-profile fight against federal efforts to force it to admit women.

The Supreme Court eventually ruled that if the school accepts tax money it must accept women. Its board voted 9-8 to accept women rather than go private and stay all-male, ending VMI’s long quest to be the last state-supported college to exclude women.

Since Peay’s departure, VMI announced Cedric Wins, a retired U.S. Army major general, will serve as its interim superintendent. Wins will be the first Black leader to serve in that role. The school’s board has also committed to other changes, including creating a permanent diversity office.

Wins said in a statement on Monday that “it is an understatement to say the relocation of the statue has evoked strong opinions on both sides of the issue.”

“The history of VMI over the past 181 years is well documented. Stonewall Jackson’s ties to Lexington and the Institute as an instructor are part of that history,” Wins said. But “VMI does not define itself by this statue and that is why this move is appropriate,” he added.

The school said contractors will remove the bronze statue on Monday before reinstalling it at the Virginia Museum of the Civil War and New Market Battlefield State Historical Park. It said the relocation will cost $209,000, funds to be paid out of VMI’s facility maintenance and operations account.