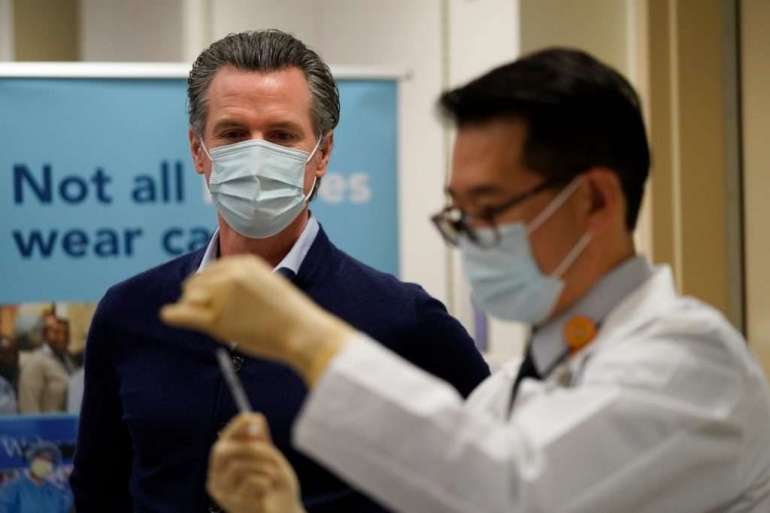 California has consensus that health care workers and nursing home residents are first in line. But prioritizing the next group of essential workers and vulnerable residents is extremely difficult. And scarcity breeds tension in a state of 40 million where less than 3 percent of the population is expected to get the vaccine by the end of the month.

“It’s so tough to choose — it’s like which child do you love the most?” said Oliver Brooks, chief medical officer of Watts Healthcare Corp. and co-chair of the California work group evaluating priority. “That’s why we’re doing our best to remain objective and are using specific criteria to make these decisions.”

In California, Brooks’ state advisory group has representatives from 70 community organizations and medical associations, and interest groups are putting their best arguments forward. A common theme has emerged so far: Emphasize your sector’s role in supporting the health care response to the coronavirus.

Airline pilots said that crew members should be considered because many of their planes will transport vaccines and medical supplies. Boys & Girls Clubs said that child care workers have been providing in-person support for students while schools have been closed, including children of health care workers.

But few have been louder this week than teachers, who have built a growing coalition of parents and community leaders who see widespread educator vaccination as the way to reopen schools. Most of California’s 6 million public schoolchildren haven’t set foot in a classroom since March.

Others have gone public with their arguments. Uber CEO Dara Khosrowshahi on Thursday sent a letter to Newsom along with governors from all states describing rideshare and food-delivery drivers as “a lifeline to their communities” who should get vaccinated early. The California News Publishers Association asked the state advisory committee for reporters to get priority — a request that some journalists disowned because they said others deserved vaccines ahead of them.

Some are leaning on the Legislature. Representatives of Local 1167 of Southern California’s United Food and Commercial Workers are lobbying their state representatives for access.

“It’s not that our members are any more important than anyone else,” said Joe Duffle, president of the local, which represents some 20,000 workers. “We have to make sure the food supply chain is kept healthy, and the people who work in it are healthy.”

Brooks said the key is making decisions based on the established criteria. That includes occupational exposure, equity, societal impact followed by economic impact.

The task gets trickier when determining sub-prioritization within a specific group of essential workers — like how a worker in a critical infrastructure system with lower exposure compares to someone with higher exposure in a less critical function.

“Hopefully if we do it in that fashion, we are somewhat immune to specific lobbying,” Brooks said. He said the group is finalizing the priorities, but he did not know when their list would be released to the public.

David Magnus, director of the Stanford Center for Biomedical Ethics, said he expects vaccine distribution to be far more equitable than the Covid-19 testing process, when professional athletes and people with influence got access to regular tests before frontline health care workers. Unlike the testing universe, the vaccines are produced by only a select group of manufacturers and distribution is expected to be tightly controlled.

But Magnus, who is working with public health officials on the distribution plan, said he expects to see some ethical debates, even within high-risk populations.

“There are going to be states where it’s politically unpopular to vaccinate prisoners before vaccinating other citizens,” he said.

Lobbying and politics will likely play a role, but Magnus questions how much of an influence it will have on decision-making. “It’s not like an organ transplant where if you’re low on the list, you die without an organ,” he said. “Everyone who needs a vaccine should get vaccinated. It’s just a matter of timing.”