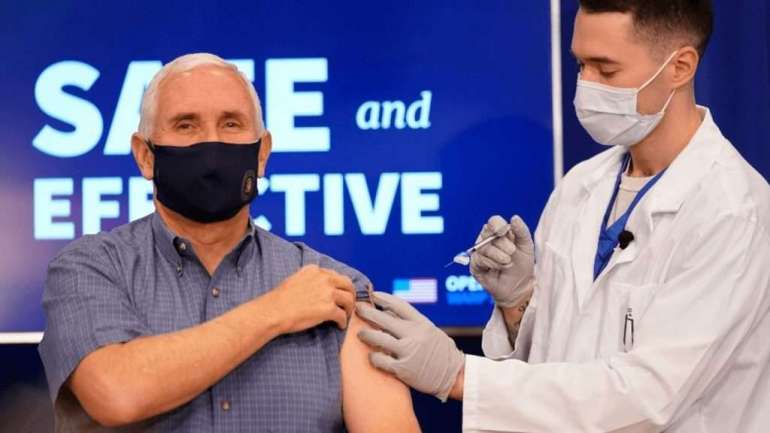 The vice president added that he and the second lady “wanted to step forward and take this vaccine to assure the American people that while we cut red tape, we cut no corners.”

President Donald Trump himself still has not been vaccinated, tweeting over the weekend that he would do so “at the appropriate time” and that top White House staffers should receive the shot “somewhat later in the program.” Trump was hospitalized with Covid-19 in October, but health experts have warned his current natural resistance to the virus is unclear.

President-elect Joe Biden also plans to get the vaccine on Monday. He and his wife, Jill Biden, will do so in public to boost confidence in the vaccine’s safety. Meanwhile, Senate Majority Leader Mitch McConnell, 78, and House Speaker Nancy Pelosi, 80, both received the vaccine Friday, sharing photos of themselves with congressional medical staff on Twitter.

Pence, who chairs the White House coronavirus task force and has led the federal pandemic response, is one of the remaining high-profile administration officials who has not yet contracted Covid-19 despite three separate White House outbreaks this year — including a spate of cases in October that resulted in his chief of staff and several top aides testing positive.

The Food and Drug Administration authorized Pfizer’s vaccine for emergency use last week. On Thursday, an independent FDA advisory committee endorsed another vaccine candidate from U.S. drugmaker Moderna, and the agency announced that it planned to authorize the shot.

The vaccines could contribute significantly to the country’s fight against Covid-19, which has infected more than 17.2 million Americans and resulted in a U.S. death toll that surpassed 300,000 on Monday. Pence alluded to the difficulty of the situation Friday, saying that although “history will record that this week was the beginning of the end” of the pandemic, “we have a ways to go.”

The somber remarks about soaring hospitalizations and “heartbreaking losses” were a far cry from the vice president’s public posture as recently as this summer, when he penned a rosy op-ed for The Wall Street Journal denying that there was a “second wave” of coronavirus and insisting that “panic” generated by the media “is overblown.”

Adams was similarly frank in his assessment of the coronavirus threat Friday, likening the pandemic to a marathon in which “the last couple of miles” are the most challenging. “But by golly, the finish line is in sight. So we’ve just got to keep on running. American people, we need you to keep on running. We’re going to get there,” he said.

Much of the surgeon general’s remarks were focused on reassuring Americans of color about the safety of the vaccines. He acknowledged that such concerns within those communities were “not without good reason,” and invoked the “shameful” decades-long Tuskegee syphilis experiment.

“To truly promote confidence in these vaccines, we must start by acknowledging this history of mistreatment and exploitation of minorities by the medical community and the government,” Adams said. “But then we need to explain and demonstrate all that has been done to correct and address these wrongs.”

Dr. Anthony Fauci, the nation’s top infectious disease expert, also spoke Friday and described the “important, symbolic” vaccination ceremony as “bittersweet.” Despite “record numbers of cases, hospitalizations and deaths,” he said, “the sweetness is the light at the end of the tunnel, which I can tell you — as we get into January, February, March and April — that light is going to get brighter and brighter, and the bitterness is going to be replaced by the sweetness.”