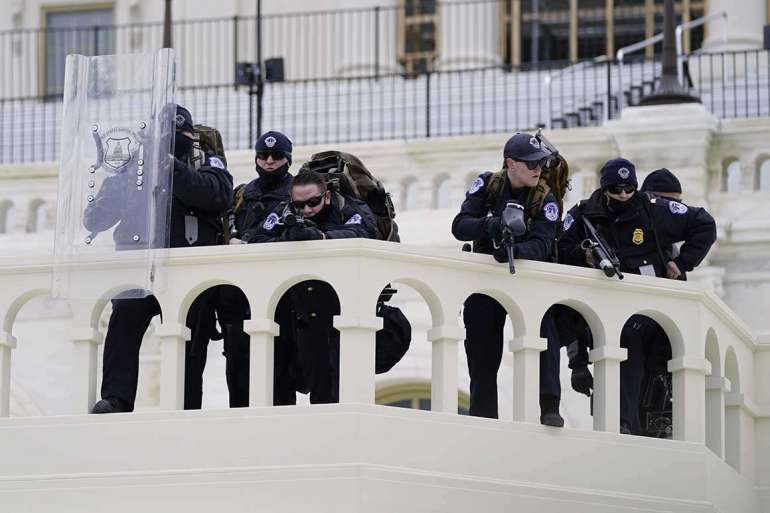 She also said it was striking to see the law enforcement response to Wednesday’s assault, compared with the response to protests over the summer related to police brutality and racial justice.

“We must also understand why the federal law enforcement response was much stronger at the protests over the summer than yesterday during the attack on Congress,” she said.

The Capitol police union shared Bowser‘s frustration, releasing a statement Thursday denouncing the force‘s leadership, which it said “undermined the response of law enforcement to the violent events at the U.S. Capitol.“ The union demanded leadership change, including the chief of the U.S. Capitol Police.

“Our officers did their job,“ the union‘s chairman, Gus Papathanasiou, said in the statement. “Our leadership did not.“

Bowser also demanded that Congress pass legislation allowing for the city to become the nation’s 51st state and transfer authority over the D.C. National Guard to the mayor’s office, rather than have to request permission from the Pentagon, in response to the insurrection that left at least four people dead.

She also said National Guard should have been activated and in place at the Capitol in anticipation of Wednesday’s event, while acknowledging that was not her call to make.

“The Capitol Police and the leadership at the Capitol, they did not make the decision to call in guard support,” she said. “I cannot order the army, the National Guard, to the United States Capitol grounds.”

Bowser’s comments mark a dramatic shift from her tone Wednesday morning, before the violence at the Capitol, when she said the city was “absolutely prepared” ahead of the pro-Trump protest. Bowser has issued a state of emergency in Washington through Inauguration Day on Jan. 20.

The city’s police force is separate from the one guarding the capitol and other federal buildings on the Capitol grounds, but was called into to assist Wednesday after rioters overran security and broke-in to the Capitol building and ransacked offices.

Bowser is far from alone in questioning law enforcement’s preparations for Wednesday’s protests, and Rep. Tim Ryan (D-Ohio) has vowed that there will be investigations into the incident — and likely some heads will roll as a result.

“You can bet your ass that we’re going to get to the bottom of it,” Ryan, who chairs the House appropriations committee charged with funding the U.S. Capitol Police, told POLITICO Wednesday.

The tumult has led to the arrest of 68 people, according to acting Metropolitan Police Chief Robert Contee, 41 of whom were detained on the grounds of the U.S. Capitol. More are arrests and criminal charges are expected in the coming weeks, and law enforcement officials are soliciting information on people who stormed the Capitol.

Contee also said that while the massive protest was anticipated, “there was no intelligence that suggested there would be a breach of the U.S. Capitol.”

The Defense Department has authorized up to 6,200 National Guardsmen from a half-dozen states to help authorities maintain order in the city. At Bowser’s news conference, Army Secretary Ryan McCarthy said that a seven-foot fence is being installed to solidify the perimeter around the Capitol and the enhanced measures will remain “for no less than the next 30 days.”