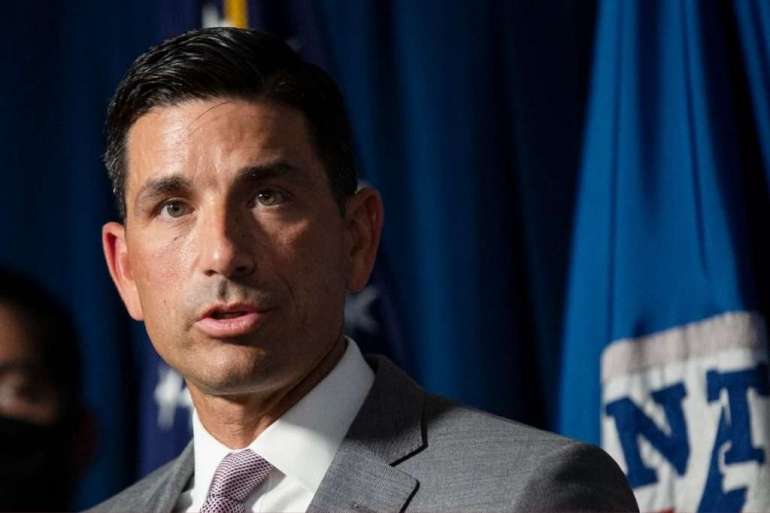 Wolf’s move follows last week’s attack on the Capitol by a mob of Trump supporters, which resulted in five deaths. Transportation Secretary Elaine Chao and Education Secretary Betsy DeVos also stepped down after the Capitol attack.

While Wolf cited “recent events“ as being part of why he‘s leaving, he made no explicit mention of the attack in his email on Monday. But an administration official said that Wolf’s being disturbed by what happened last week was one of several reasons he resigned.

“The White House screwed up by nominating and withdrawing him twice,” the person said.

Wolf is expected to leave the department in the coming days.

His departure comes only nine days before President-elect Joe Biden’s inauguration — an event Democrats fear could be vulnerable to an attack similar to the one at the Capitol.

Only hours before his resignation became known to the public, Wolf had released a statement announcing that the U.S. Secret Service would designate the inauguration a national security event starting Wednesday instead of the previously planned Jan. 19. His departure is unrelated to the increased security move, said one of the DHS officials who confirmed Wolf’s departure to POLITICO.

Wolf had been leading DHS in an acting capacity since November 2019. Trump had intended to nominate Wolf to serve in a permanent capacity but withdrew his nomination last week.

Wolf fiercely condemned the rioters who stormed the Capitol on Wednesday, tweeting at the time: “Violence in any form is unacceptable. NO one has the right to attack ANY federal institution regardless of motivation.”

He urged Trump to denounce the violence on Thursday, writing in a statement: “Any appearance of inciting violence by an elected official goes against who we are as Americans.”

The White House denied at the time that the withdrawal of his nomination was related to the Capitol attack or his comments afterward.

In that Thursday statement, Wolf had also said he planned to stay in his post through the end of the Trump administration to help with the transition to Biden’s team.

Wolf wrote on Monday that he felt confident the department was positioned for an orderly transition to the new administration, and he urged staffers to welcome “them, educate them, and learn from them. They are your leaders for the next four years — a time which undoubtedly will be full of challenges and opportunities to show the American public the value of DHS and why it is worth the investment.”

Rep. Bennie Thompson (D-Miss.), chairman of the House Homeland Security Committee, said in a statement that the timing of Wolf’s departure so soon before the end of the Trump administration was “questionable,” particularly with ongoing national security concerns that include reports of further violent demonstrations.

Citing the court rulings Wolf mentioned in his notice, Thompson called his resignation an “admission that his policy decisions are indeed invalid.” U.S. District Court Judge Nicholas Garaufis had ruled that Wolf didn’t have the authorization to order a paring down of the Deferred Action for Childhood Arrivals immigration policy in November because his appointment without Senate confirmation broke usual rules of succession. Thompson also called on acting Deputy Secretary Ken Cuccinelli, whose title is also disputed on a similar premise, to step down.

“The Trump Administration too often used the Department as a political weapon, left countless senior leadership positions vacant, and let morale suffer,” Thompson said in his statement. “Our homeland security has diminished as a result. “Thankfully, with a new Administration, the 240,000 men and women of the Department of Homeland Security will have much better leadership soon and this dark chapter will be over.”