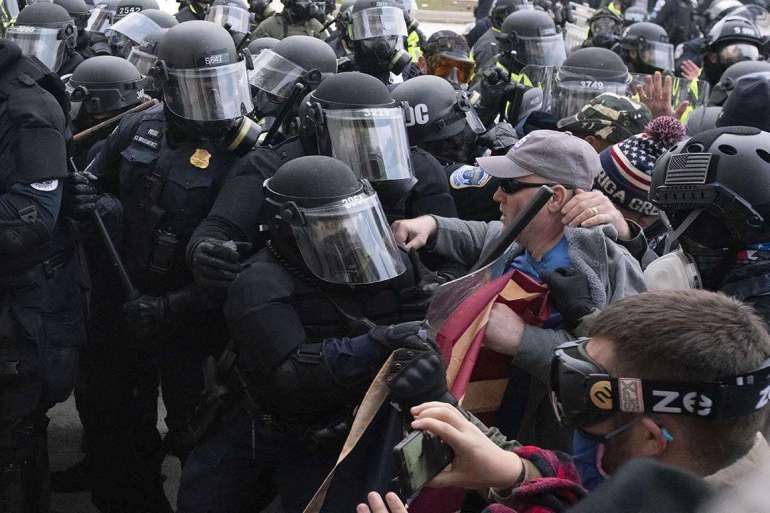 The Justice Department also announced on Thursday evening that the FBI had received more than 140,000 tips identifying rioters and had opened about 200 subject case files. The department has also launched an online portal for the public to track people charged with criminal offenses related to the Capitol attack.

Wray’s comments came at a pre-inauguration security briefing with Vice President Mike Pence and other top officials tasked with securing the high-profile event, and they mark the FBI director’s first public appearance since rioters stormed the Capitol. He did not take any questions from reporters at the briefing.

Wray’s low profile has come in for a considerable amount of criticism from lawmakers and former FBI officials, who have said he should be more forthcoming about the bureau’s response to the assault.

“I suspect that almost everybody at the FBI is working to try and track down the facts and lock people up,” former FBI Director James Comey told MSNBC on Thursday evening. “I can’t fully explain why you’re not hearing from the director or the leader of the Department of Justice.”

Wray appeared to offer a defense of that approach by saying that not all the bureau’s work was being put on display publicly.

“Our posture is aggressive, and it’s going to stay that way through the inauguration,” Wray said.

Acting Attorney General Jeff Rosen echoed that confidence in federal law enforcement on Thursday at an address to FBI agents, where he said the Justice Department would “have no tolerance whatsoever for any attempts to disrupt any aspect of the inauguration or associated events.“

“Americans can be proud of the effort the men and women of the Justice Department and our federal, state and local partners have made in the days since the attack on the Capitol building,” he said, according to a department summary of the address.

For his part, Pence — who was at the Capitol when the mob stormed into the Capitol for a period of hours as Congress was voting to certify Biden’s victory — said that the rioters “desecrated the seat of our democracy,” and said that federal officials were working to secure the complex ahead of next week’s high-profile event.

“We are committed to an orderly transition and a safe inauguration,” he said. “The American people deserve nothing less.”

Though Pence has not publicly said that he will attend the inauguration, POLITICO previously reported that the vice president was expected to do so. That would put him in contrast to President Donald Trump, who said on Friday that he would break recent precedence and skip his successor’s swearing-in.

Daniel Hokanson, chief of the National Guard Bureau, said thousands more Guardsmen were being deployed to Washington in the coming days, ramping up from about 7,000 to 21,000 by Inauguration Day. That figure matches what the head of the city’s police department said on Wednesday had been authorized to help secure the city.

James Murray, the director of the U.S. Secret Service — which is heading up security preparations — offered assurances that because of months of preparation, the inauguration would play out differently than the events on Jan. 6, which left at least five people dead and dozens more injured.

“We are highly confident about our security plan,” he said.

Sign up today to receive the #1-rated newsletter in politics